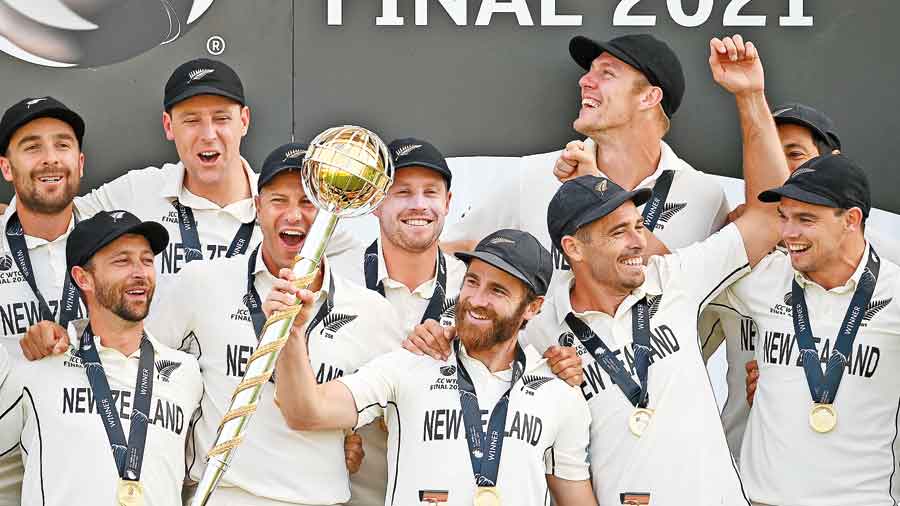 The International Cricket Council (ICC) has confirmed that points will be awarded on a match-by-match basis during the 2021-23 World Test Championship (WTC), which is set to kick off with India’s five-Test series in England next month.

At the inaugural edition of the WTC, the points structure was formulated on a series-by-series basis, with the teams’ rankings determined by percentage of points won.

“We received feedback that the previous points system needed to be simplified,” ICC’s acting chief executive Geoff Allardice said. “The cricket committee took this into consideration when proposing a new, standardised points system for each match. It maintained the principle of ensuring that all matches in a WTC series count towards a team’s standing, while accommodating series varying in length between two Tests and five Tests.”

The nine teams will play an equal number of series — six (three home and three away) — but an unequal number of Tests, ranging from 22 for England to 12 for Bangladesh. Each Test will carry a total of 12 points, with a win fetching full points, a tie six points, and a draw four points.

Besides the series in England, India’s tours of South Africa and Bangladesh have been included as part of the WTC. The home series will comprise Sri Lanka, Australia and New Zealand.

Apart from the India-England series, the Ashes will be the only other five-match affair in the second cycle, which will end in June 2023. Australia’s tour of India next year is the only four-Test series in the cycle.

“It was obviously pretty special to win the inaugural World Test Championship last month and it’s exciting to now look ahead to the second edition,” he said. “The WTC has certainly added more context and brought new meaning to Test cricket and it was awesome to see the interest that was generated around the final against India.

“Trying to defend the title will be a huge challenge but our focus will be on making sure we prepare as well as we can.”

“It was great to have played the final of the ICC World Test Championship against New Zealand in what was a memorable contest,” Kohli said. “Not just the final, we saw the determination of players throughout the first edition of the championship. The following of cricket lovers too was great to see, and I am sure they will all be waiting eagerly for the second edition.

“We will regroup with new energy for the next cycle starting with our series against England, hoping to give our fans a lot to cheer about.”

⦾ What will be the new format for the second edition of the ICC World Test Championship?

The format of the second edition is the same as last time. It comprises the top nine Test teams, all of whom will play six series each — three at home and three away. The top two teams will compete in the final. However, the points system will be different.

⦾ How is the points system different this time?

⦾ Why the change in points system?

According to the ICC, this has been done to simplify the points system by awarding the same number of points for a Test win, regardless of series length. The first edition saw each series carry 120 points, which was divided according to the number of matches. So a Test match could be worth only 24 points (for a five-match series) or 60 points (for a two-match series). This meant that it was easier to win full points in a shorter series than in longer ones. The ICC is trying to address that issue by introducing this new system.

⦾ Will teams qualify according to total points won or percentage points?

Teams will qualify on the basis of percentage of points won to standardise the imbalance in the number of matches played by teams. The first edition of the WTC started on the basis of total points system but once it was clear that all the series could not be completed as planned owing to the pandemic disruption, it was changed to a percentage points system. This helped complete the first cycle within the competition window.

⦾ What are the advantages of a percentage points system?

This system enables the relative performance of teams to be compared at any point in time. So, the cancellation of matches or series for any reason does not directly impact the points table.

⦾ What about teams getting docked for slow over-rates?

Teams will lose one championship point for each over short.

⦾ What happens to Test matches outside of the WTC?

Test matches can be played outside of the WTC. These will include Tests featuring teams not in WTC as well as series which may be played between teams featuring in the championship but not as identified as part of WTC.

⦾ What about four-day Tests and day-night matches?

Day-night matches can be included by participating teams by mutual agreement. There will be no four-day Test matches as part of the championship.

⦾ The first WTC final had the provision of a reserve day. Is that being increased?

As of now, there are no plans to schedule any additional reserve days. The idea behind having a reserve day is to make up for any loss of playing time during the five scheduled days, not to keep playing until one side wins.

⦾ Will the teams be declared joint winners again if the final ends in a draw?

The ICC hasn’t spelt it out yet. They will announce the playing conditions for the final later.