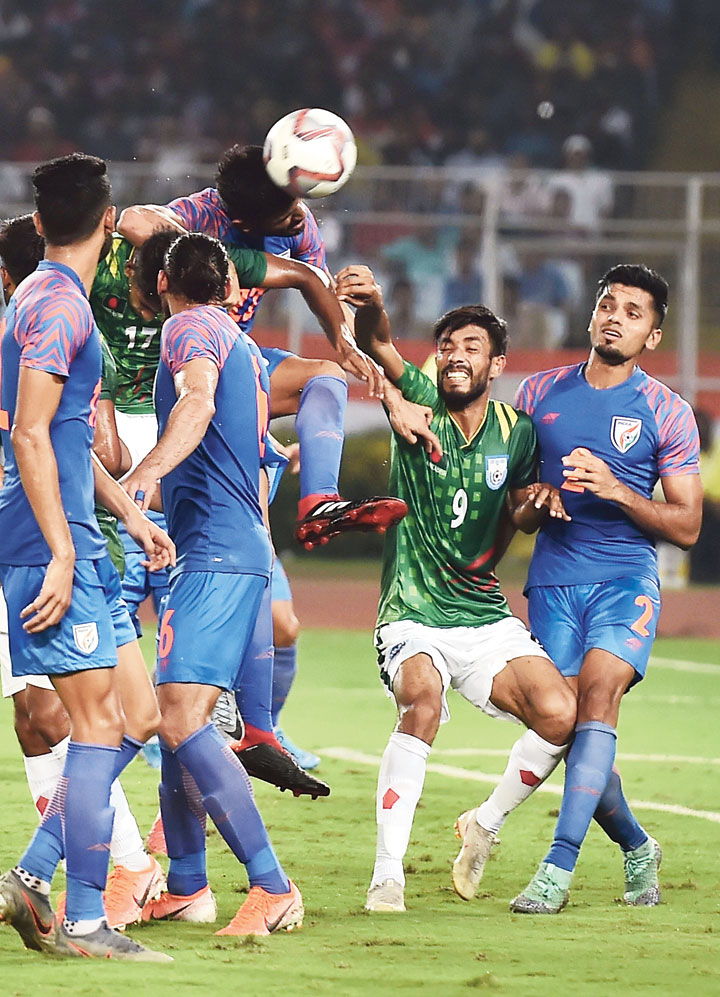 After the Doha high, heartbreak at home.

India, who grabbed the headlines with a superb performance against Qatar last month, had to ride Adil Khan’s 88th-minute strike to snatch a 1-1 draw against Bangladesh in a Group E match at the jam-packed Salt Lake Stadium on Tuesday evening.

It was a match which India were expected to win by a big margin. But what transpired in front of 61,486 fans was nightmarish. Bangladesh played a superb game and were distinctly unlucky not to take Wednesday’s flight back home with three points.

The heroes of September 10 seemed like they had left their footballing sense back in the dressing room. Otherwise, how do you justify Gurpreet Singh Sandhu’s needless rushing out and making a mess of a Bangladesh captain Jamal Bhuyan’s centre? Gurpreet, the hero of the Qatar match, had no business coming out and he collided with Adil inside the penalty box. All Saad Uddin had to do was head it into an empty net. The players and supporters could not believe it, as Bangladesh players started celebrating.

That was three minutes before the half-time.

Then in the 54th minute, Mohammed Ibrahim, a constant thorn in the Indian flesh who made Rahul Bheke’s life miserable, got the better of the Bengaluru FC sideback and his shot beat Gurpreet, but hit the angle of the far post. There was also a goalline save by Adil. Nabib Ziban made a delightful chip to which Gurpreet got a faint touch and as the ball was about to nestle into the net, Adil made a goalline save with an acrobatic overhead kick.

“When Sunil (Chhetri) had a quiet match, others should have stepped up. Sadly, except for Sahal (Abdul Samad), nobody caught the eye,” former India captain Rennedy Singh told The Telegraph.

With the equaliser not coming, India coach Igor Stimac brought in Brandon Fernandes, Raynier Fernandes and Lillianzuala Changte. And it was Brandon’s corner from which Adil equalised.

Yeasin, who had a fantastic match, could have headed it away before Adil pounced on the ball. May be Yeasin was tired.

In the first half, India dominated the proceedings but could not create more than two clear chances. Very early in the match, captain Sunil Chhetri’s volley went straight to Bangladesh goalkeeper Ashraful Islam Rana. And then midway through the first half, Ashraful was again called into action when he brilliantly fisted away a Manveer Singh back-header at the near post.

There were a couple of nutmegs by Ashique Kurniyan, some delightful one-twos between Udanta Singh and Anirudh Thapa. But other than that, there were nothing much to write home about. It was Bangladesh who maintained the shape and soaked in all the pressure.

Right back Rayhan Hasan, captain Jamal Bhuyan, central defenders Rahmat Mia and Yeasin Khan refused to be cowed down by the Indian attacks.

And soon the Indians started losing the plot. In a match like this an early goal is what you need. But India just did not know how to break down the Bangladesh defence. Bangladesh coach Jamie Day, as expected, adopted a defensive strategy with eight men defending every time India had the ball. A simple parking the bus in front of the goal to which India had no answer.

Take for example Yeasin’s performance. He had a cut on his head within the first five minutes, and played the rest of the match with a bandage on. But that did not bog him down and he played probably the match of his life. There were timely tackles, clearances with headers... Yeasin did everything. And in the second half he put his body behind the ball to save a Sahal Abdul Samad low rasping shot. Bangladesh were distinctly unlucky in the very first minute when Rahul Bheke, who had a forgettable match, tripped a fast and furious Mohammed Ibrahim. But the referee, despite being close to the incident, did not give a penalty. Television replays clearly showed Bheke had brought down Ibrahim.

Where does India go from here? They have two points, but have two difficult matches against Afghanistan and Oman in November.

There was no Sandesh Jhingan on Tuesday, and it was evident that he was badly missed. India have a mountain to climb in November, that’s for sure.