After a grueling tournament at Roland Garros, Rafael Nadal showed that, even not at 100%, he is the king of clay 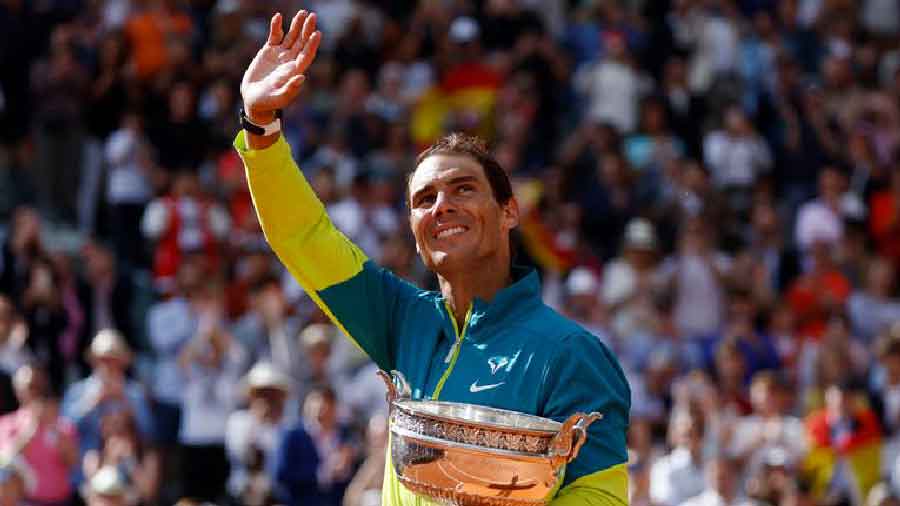 After a grueling tournament at Roland Garros, Rafael Nadal showed once again that, even not at 100%, he is the king of clay. His victory over Norway's Casper Ruud now puts him half way toward a Calendar Slam.

One wouldn't know that Rafael Nadal was dealing with chronic foot pain when watching him play in the French Open men's singles final at the Court Philippe-Chartier in Paris on Sunday.

Nadal, two days removed from his 36th birthday, showed the agility and fluidity that made him the icon that he is at Roland Garros.

After a grueling tournament in which he had to face Novak Djokovic and Alexander Zverev to reach Sunday's final, he made quick work of Norwegian Casper Ruud, defeating him 6-3, 6-3, 6-0 to win his 14th French Open title.

"Very difficult to describe the feelings that I have," Nadal said afiter the match. "It’s something that I for sure never [would have] believed — to be here at 36, being competitive again, playing in the most important court of my career. It means a lot."

Sunday's win was a full-circle moment for Nadal. Winning his first title in 2005 at the age of 19, not only did he become the oldest French Open champion in the Open era, but he also defeated a protege of his in 23-year-old Ruud, a clay court specialist who grew up idolizing the Spaniard.

The victory was also his 22nd Grand Slam title, improving his own record in men's tennis, and also put him halfway towards a Calendar Slam following his triumph at the Australian Open in January.

Though Roland Garros has been a second home for Nadal throughout his tennis career, this year’s French Open was never going to come easy. The draw alone set him up for a quarterfinal date with world number one Novak Djokovic, and he would have had to face either Zverev or up-and-coming compatriot Carlos Alcaraz before reaching the final.

On top of that, there were concerns whether aging tennis star would be able to play at all. He came into the Grand Slam with chronic pain in his left foot after the Italian Open in Rome. Nadal had also recently recovered from a fractured rib he suffered at Indian Wells in March.

But he persevered despite long, grueling matches in the spring heat in Paris. He pushed through a four-hour match to defeat Canadian Felix Auger-Aliassime in the fourth round and needed four hours again to defeat Djokivic in the quarterfinal. He was set to have an epic against Zverev in their semifinal before the German rolled his ankle and was forced to retire — the two needed three hours to play their two sets.

He then saved his best for the final, looking once again like the tennis legend he is to defeat Ruud in straight sets.

How Nadal defeated Ruud in the final

In some ways, Nadal was facing a younger, right-handed version of himself in Ruud, the first Norwegian to reach a men's singles Grand Slam final.

The two had never played each other on the ATP circuit, but Ruud has trained at Nadal's tennis academy in Manacor since 2018 and has practiced with the Spaniard on multiple occasions.

Ruud was set to be a formidible opponent — seven of his eight ATP titles have come on clay. But the moment appeared to be too big for the young Norwegian. Nadal prevailed in the first set after several mistakes from Ruud, and although the protege took a 3-1 lead in the second set, Nadal went on to win 11 straight games to secure the championship.

"Today I got to feel how to play against you in a final," Ruud told Nadal after the match. "It’s not easy."

Before Sunday's match, many speculated whether Nadal would call it quits after another successful run at Roland Garros. Ahead of the final, he was asked whether he would lose the final if it meant he would have a magical new foot.

"I would prefer to lose the final without a doubt," Nadal answered. "My thoughts haven’t changed; in the end a new foot would allow me to be more happy in my day-to-day life. Winning is lovely and it fills you with adrenaline for a short moment but life goes on. Life is much more important than whatever title."

But he put talk of retirement to bed after the final, saying he was "going to keep fighting."

That said, whether he will play Wimbledon, which runs from June 27 to July 10, remains open, especially since the tournament has decided not to award ATP points after excluding participants from Russia and Belarus.

However long Nadal continues fighting, whether it's injuries or up-and-comers on the men's circuit, Sunday was proof that he can still come out on top.