Polish youngster convincingly defeats Coco Gauff of the US 6-1, 6-3 in just over an hour to reclaim the trophy 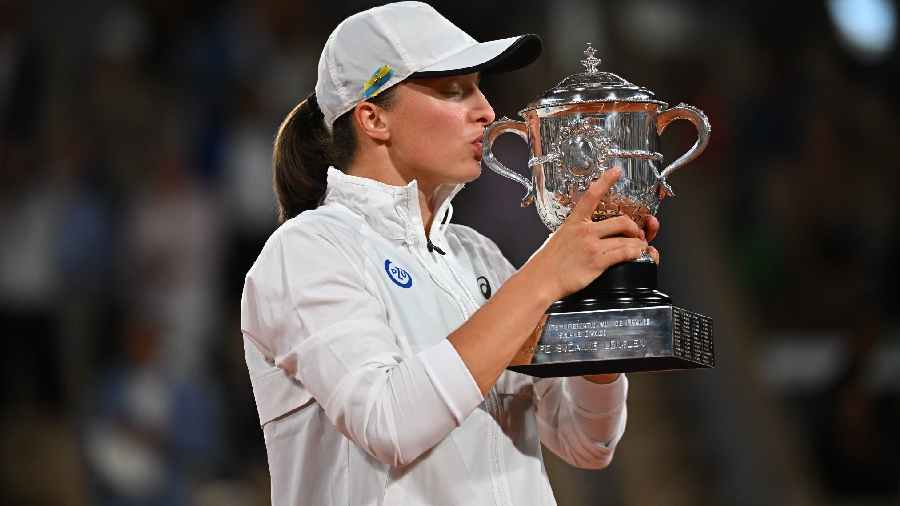 After winning her first French Open out of season in October 2020 as an unseeded teenager, Iga Swiatek proved that was absolutely no fluke by winning the title again in the spring as an overwhelming favourite.

Swiatek, now 21 and the No. 1 seed from Poland, cemented her status as the game’s dominant player by defeating Coco Gauff of the US 6-1, 6-3 in Saturday’s women’s final in just over an hour.

She even beat the rain, closing out the victory with thunder rumbling in the final game over the main Philippe-Chatrier Court with its open roof.

Red clay is Swiatek’s favourite playground and she took command on Saturday from the start to win her 35th straight match and sixth straight tournament.

“Two years ago, winning this title was something amazing,” Swiatek said. “Honestly I couldn’t expect better but did everything to get here.”

Her winning streak is the longest in more than 20 years.

“What you have done on the tour the last couple months is really amazing,” Gauff said to Swiatek on court.

Gauff, in her first grand slam singles final at age 18, had not dropped a set in the previous rounds of the tournament. The step up proved too big on Saturday as Gauff lost to Swiatek for the third time in three encounters.

“I just told Coco, ‘Don’t cry,’ and what am I doing now?” Swiatek said with a smile at Gauff as she gave a teary, halting speech to the Roland Garros crowd.

Just four years ago, they both played in the French Open girls tournament, with Gauff winning the title and Swiatek losing in the semis. But Swiatek has stormed to the front of the women’s game since then with her aggressive style and detail-oriented approach to training.

She is one of the first tennis players to travel with a full-time performance psychologist, Daria Abramowicz, and despite finishing in the top-10 last year, switched coaches in the off-season. Swiatek had finished the 2021 season in tears, crying on court before the finish of her round-robin match at the WTA Finals in Guadalajara, Mexico.

“When I came to the team in December, I said, ‘OK let’s start with the strengths, not the weak points,’” Wiktorowski said. “It was really important for her to focus on what she did well, not just what she needed to improve.”

Her new team has clicked quickly, and she has not lost since February, compiling a 42-3 record in 2022.

There were shouts and murmurs aplenty on Saturday. Swiatek was not at her sharpest early but she was the more aggressive player.

She took a 4-0 lead before Gauff managed to hold serve, and Swiatek then closed out the opening set. There were few extended rallies: the longest exchange was 15 shots and the average rally length under four shots, surprising in light of the defensive skills of both finalists.

Though Gauff managed to break Swiatek’s serve to open the second set, Swiatek settled herself and played one of her best games of the match to get back in control. She served for the championship at 5-3 and finished off the victory with a first serve to Gauff’s forehand. The return sailed just long and Swiatek dropped to her knees, a French Open champion for the second time.

In light of her age, her long-range plan and her talent, it would come as quite a surprise if Swiatek, whose role model is 13-time French Open champion Rafael Nadal, does not win at Roland Garros again.