Moments after Les Bleus hit the woodwork, Mikel Oyarzabal fired La Roja in front but their lead lasted less than two minutes before a magnificent finish from Karim Benzema 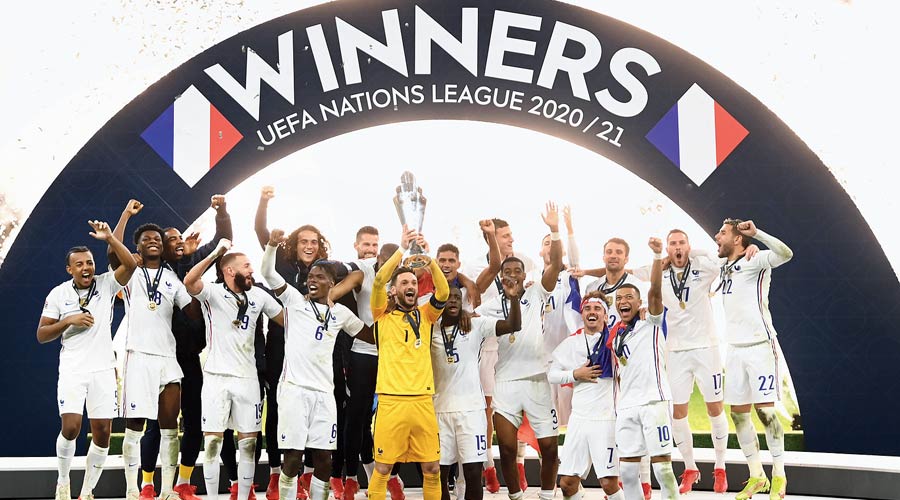 Kylian Mbappe scored late as world champions France came from behind to win the Nations League with a 2-1 victory over Spain in the final.

Mbappe netted with 10 minutes remaining as France were again forced to fight back, just as they had done in the semifinals against Belgium.

There were few chances in a cagey final in Milan but the match burst into life shortly after the hour mark.

Moments after France hit the woodwork, Mikel Oyarzabal fired Spain in front but their lead lasted less than two minutes before a magnificent finish from Karim Benzema.

"This is the first piece of silverware I've won with France so I'm very proud and delighted," said Benzema, who only recently returned to the France squad after a five-year absence.

"We played two top-level performances. We went out there to win the trophy so I'm delighted for the team as a whole and I'm proud as an individual."

There was a video review for a possible offside on Mbappe but the goal was given as Spain defender Eric Garcia was the last to touch the ball as he attempted to intercept the pass to the France forward.

"I'm used to not talking about referees and I concentrate on what I can control," Spain coach Luis Enrique said.

"I don't think I've ever talked bad about referees. I've got nothing to say. I concentrate on trying to make my teams play the best way and accepting wins and losses."

How the match panned out

France started well and almost took an early lead as Benzema rounded Spain goalkeeper Unai Simon and attempted to roll across for Mbappe but the ball was cleared by Cesar Azpilicueta.

Spain went closer five minutes later as Torres threaded the ball through to Pablo Sarabia but his fairly tame shot was an easy catch for France goalkeeper Hugo Lloris.

Spain dominated possession but created few chances. It was the only side to have a shot on target in the first half though.

Theo Hernandez had scored the last-minute winner for France against Belgium and he ignited Sunday's final when his effort crashed off the underside of the bar and out in France's first real sight of goal in the 63rd minute.

Moments later, however, it was Spain which broke the deadlock as Oyarzabal raced onto Sergio Busquets' ball over the top and fired into the bottom right corner.

Oyarzabal had set up both of Torres' goals in the semifinal match.

But France was swiftly back on level terms as Benzema cut in from the left and curled a sumptuous effort into the top right corner.

And the stage was set for Mbapp to score the winner as he and France continue their revival. Mbapp was judged to have sprung the offside trap as he raced onto Theo Hern ndez's through ball and placed it into the bottom right corner.

Lloris pulled off two great saves from point-blank range to deny first Oyarzabal and then Yeremi Pino as France survived a late siege by Spain.

Mbappe has now scored in successive matches, after two goals in his previous 13 internationals.

It was the third straight victory for France.

European champions Italy beat Belgium 2-1 in the third-place match earlier Sunday. Spain beat Italy 2-1 in their semifinal game with Ferran Torres netting both goals. There had been doubts about Torres' fitness but he recovered to start the final. Midfielder Adrien Rabiot was absent for France after testing positive for the coronavirus.