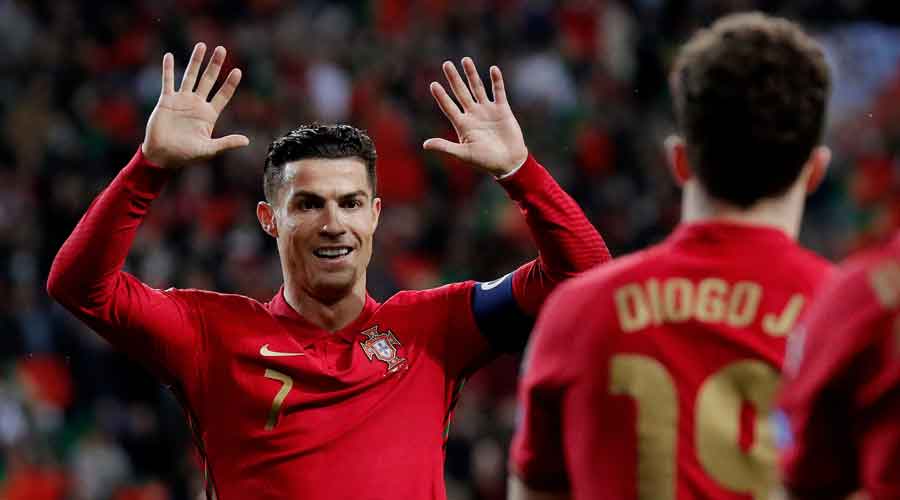 Portugal survived a nervy finale to move one step closer to reaching the World Cup with a 3-1 win over Turkey, who missed a late penalty that could have forced extra-time in their play-off semi-final on Thursday.

Roared on by a sold-out Dragao Stadium in Porto, Portugal dominated the game from the start and went 2-0 up in the first half after Otavio scored one goal and created another for Diogo Jota.

But Fernando Santos’s side were pegged back by a Burak Yilmaz goal in 65th minute that put the Portuguese fans on the edge of their seats as Turkey started to threaten.

Defender Jose Fonte then fouled Enes Unal inside the area in the 85th minute to concede a penalty but Yilmaz fired his effort high over the bar.

Portugal substitute Matheus Nunes then relieved the pressure on the hosts in added time with their third goal from a counter attack.

“I wasn’t upset with the team but we played with fire,” Santos told reporters. “We had the game under control but slowed down. Obviously the players are not machines, we didn’t manage to score for 3-0 and those things can happen in football. But I’m glad we reacted very well. That moment (the penalty) could have been difficult for us.”

After missing out on automatic qualification in November, Portugal will now host North Macedonia on Tuesday with the winner qualifying for the 2022 World Cup in Qatar.

Portugal started strongly, scoring twice in the first half.

He scored from a rebound in the 15th minute after a Bernardo Silva shot came back off the post and just before half-time, he crossed from the right flank for Jota to aim an unstoppable header into the net.

But Portugal took their foot off the gas in the second half and allowed the visitors to get into the game.

Gareth Bale may have had an indifferent few seasons at club level but when it comes to Wales he continues to show his mettle.

The 32-year-old captain again proved the Welsh talisman on Thursday as his double ensured a 2-1 play-off semi-final win over Austria, taking them a step closer to their first global soccer showpiece since 1958.

The victory in Cardiff means Wales now have a home game against either Scotland or Ukraine in June for a place in Qatar.

Bale has played only a handful of games at Real Madrid this season and was criticised for sitting out the clash against Barcelona last weekend but he delivered yet another virtuoso performance on the international stage.

He fired home a free-kick from all of 35 yards for the opener in the 25th minute, arrowing the ball over the Austrian wall with delicious dip that saw it sneak in between goalkeeper and post.

“The star man turns up and that’s the best free kick I’ve ever seen in my life,” said Wales manager Rob Page. But Bale, winning his 101st cap, was not done yet.

Early in the second half, he anticipated Austrian hesitation from a Welsh short corner routine, took the ball off teammate Ben Davies and slammed home to make it 2-0.

Sweden substitute Robin Quaison struck in the second half of extra-time to secure a 1- 0 win over the Czech Republic and set up a clash away to Poland next Tuesday with a place in Qatar up for grabs.

The Czechs had an early goal ruled out for a foul and the Swedes had the lion’s share of possession for most of the play-off semi-final, but the two sides struggled to break each other down in a game full of tough tackling and wayward passing.

The attacking trio of Forsberg, Isak and Dejan Kulusevski caused the injury-hit Czechs all manner of problems but, with the Swedes missing both of their first-choice full backs, they often struggled to get the ball to their forwards out wide.