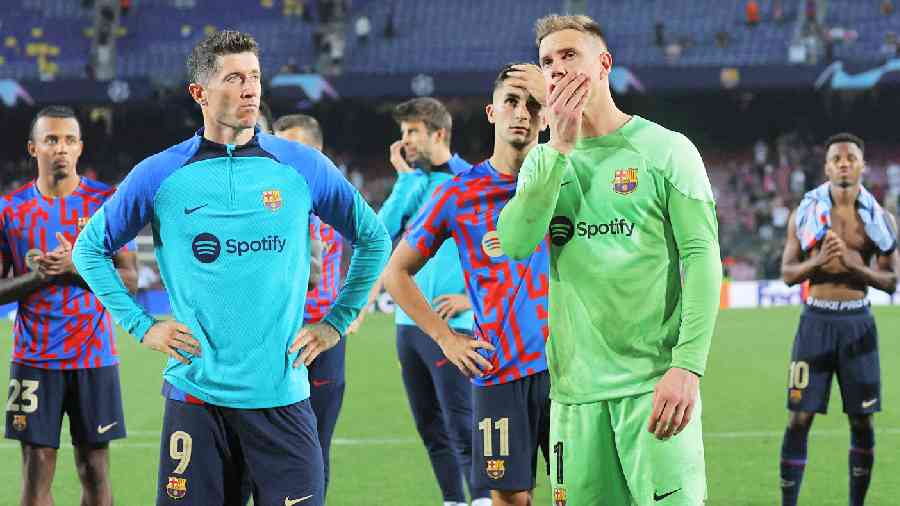 FC Barcelona  were eliminated from the Champions League even before enduring yet another 3-0 beating by Bayern Munich.

Atletico Madrid also went out following an extraordinary sequence around a penalty awarded by video review after the final whistle of their 2-2 draw with Bayer Leverkusen.

Atletico’s spot kick was saved before a frantic scramble in the goalmouth still could not bring the winning goal the Spanish club needed to prevent Porto advancing thanks to their 4-0 win earlier at group leaders Club Brugge.

Two Spanish powers who were part of the failed Super League launch last year will now miss out on the roundof-16 of Europe’s top competition.

Liverpool’s passage into the knockout stage with a game to spare was relatively calm in a 3-0 win at Ajax to join leaders Napoli in advancing from free-scoring Group A, which has had 44 goals in 10 games.

In more stoppage-time drama with video review, Tottenham thought they had won Group D when Harry Kane shot the ball into Sporting Lisbon’s net with seconds left in a game tied at 1-1.

A long VAR check ruled Kane had been offside, a furious Tottenham coach Antonio Conte was shown a red card, and the most finely balanced group goes to the final round next week with all four teams having a chance to advance.

Group leaders Tottenham play at last-placed Marseille next Tuesday, while Eintracht Frankfurt — who beat Marseille 2-1 on Wednesday — go to Sporting.

The meeting between heavyweights in  Barcelona  was rendered meaningless before kick-off, when the five-time European champions hopes of advancing were ended by Inter Milan’s 4-0 win over Viktoria Plzen in one of the early games.

Barcelona needed Inter to drop points and then still had to beat Bayern, who also beat the Spanish team 3-0 in two group meetings last season and won 2-0 at home in September.

The outcome was clear after Sadio Mane scored in the 10th minute. Eric Maxim Choupo-Moting doubled the lead before halftime and Benjamin Pavard added a third in stoppage time.

Barcelona, even after signing former Bayern star Robert Lewandowski, has now fallen short of the round-of-16 in back-to-back seasons since Lionel Messi left in August 2021 for Paris Saint-Germain. Bayern and Napoli are the only teams with five straight wins in this group stage, and the Italian team’s 3-0 win against Rangers ran their goal tally to 20.

“The way we won gives us a lot of energy. I don’t think Barca were expecting us to be so bold. But you have to do that when you play against Barcelona,” Bayern manager Julian Nagelsmann said.

Atletico had to beat Leverkusen and got a corner at the end of stoppage time tied at 2-2. The danger was cleared and the final whistle blown before video review assistants spotted a handball.

French referee Clement Turpin consulted his screen at the halfway line and gave the penalty, but Belgium midfielder Yannick Carrasco’s effort was pushed away by goalkeeper Lukas Hradecky.

The ball then looped up for Atletico’s Saul Niguez to head against the crossbar. That in turn teed up Reinildo for a shot that looked goalbound but struck Carrasco’s ankle and bounced over the goal to safety.

Atletico, who lost in the final in 2014 and 2016, can now only hope to secure third place over Leverkusen in Group B and enter the Europa League knockout playoffs in February.

On Tuesday, Juventus were eliminated. One day later it was Barcelona’s turn.

Two of the three rebel clubs still backing the failed Super League project are already out of the Champions League.

Embarrassment on the field is also a financial hit for Juventus and Barcelona, who each reported record losses this year. Both missed out on several million dollars in result bonuses offered in the group stage and will not get the $9.7 million in prize money that Uefa awards clubs who reach the round-of-16. Barcelona, unlike Juventus, are at least sure of switching to the Europa League in February.

That is worth $504,000 with seven-figure payments for advancing further. In their legal challenge to Uefa, Super League holdouts Barcelona, Juventus and Real Madrid will receive a first, non-binding opinion from the European Court of Justice in Luxembourg on December 15.

Mohamed Salah put  Liverpool  ahead against the run of play three minutes before half-time and they then took command after the break with two quick goals from Darwin Nunez and Harvey Elliott to claim a convincing triumph.

The victory kept them three points behind leaders Napoli. Napoli will be at Anfield next Tuesday to decide top place, when Liverpool would need victory by at least 3-0 to edge the Serie A leaders on the head-to-head tally between the two after losing 4-1 in Naples in September.