Ramos does it again for Real Madrid 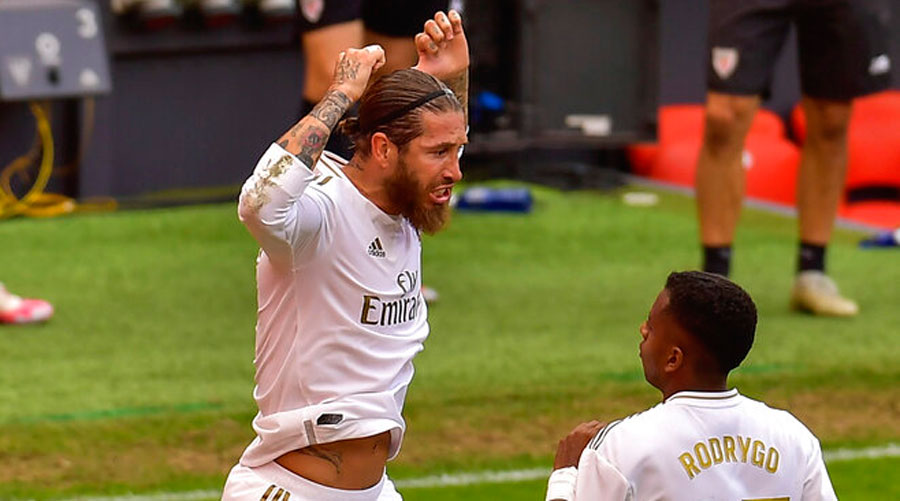 Real Madrid's Sergio Ramos celebrates with Rodrygo after scoring the only goal from a penalty against Athletic Bilbao on Sunday.
AP
Agencies   |   Bilbao   |   Published 06.07.20, 01:00 AM

Sergio Ramos was once again Real Madrid’s hero from the penalty spot as his side beat Athletic Bilbao 1-0 away from home on Sunday for a seventh consecutive victory which saw them wrap their tentacles ever tighter around the La Liga title.

The hard-fought win took Zinedine Zidane’s side on to 77 points after 34 games.

Ramos had converted a late spot-kick against Getafe in Real’s last match and the centre back once again showed nerves of steel by firing into the bottom corner in the 73rd minute to score a fifth goal in seven matches.

“I feel most comfortable during moments of the highest tension so I think I’m the ideal person to take on the responsibility at a moment like this,” said match-winner Ramos.

“The only thing I was thinking about when taking the penalty was how important it was to get the three points.”

In Serie A, Cristiano Ronaldo finally scored from a free-kick for Juventus and goalkeeper Gianluigi Buffon made a record 648th league appearance as the leaders beat their neighbours Torino 4-1 on Saturday.

Ronaldo curled his shot over the wall and into the corner to put Torino 3-1 ahead in the 61st minute, his first goal in 43 free-kick attempts during just under two seasons with Juventus.

The win left Juventus with 75 points from 30 games.

Torino have 31 points from 30 matches.