It was also a sweet moment for host Qatar, facing intense criticism over human rights in the conservative Muslim country 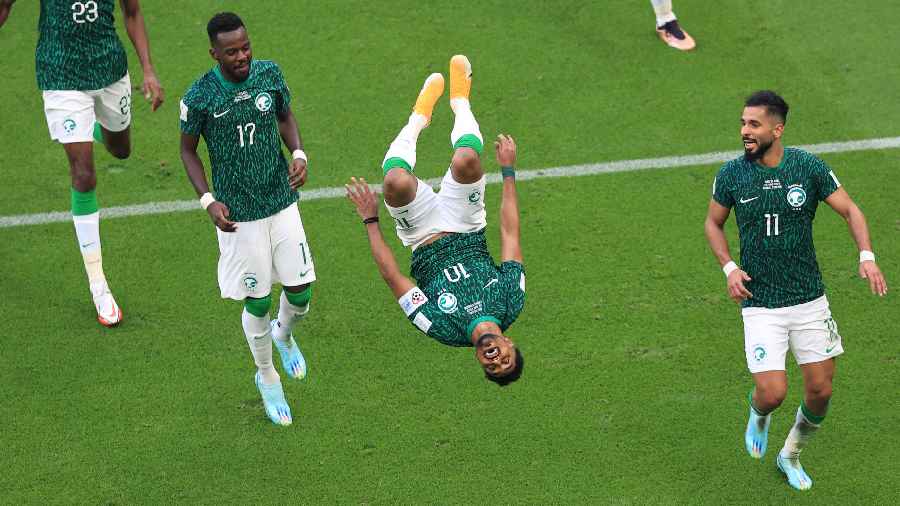 Saudi Arabia shocked Argentina in the World Cup on Tuesday with a 2-1 victory over Lionel Messi's side, prompting an outpouring of Arab pride amidst the first staging of soccer's top tournament in the Middle East.

King Salman declared a public holiday in Saudi Arabia on Wednesday to mark the achievement, a feather in the cap of Crown Prince Mohammed bin Salman, who recommended the royal order state media said.

Prince Mohammed was not seen at the match but had been front and centre at the tournament opening on Sunday.

One of Prince Mohammed's brothers, Prince Saud, posted pictures on Instagram showing the crown prince prostrating in thanks to God in a room where his other brother Energy Minister Prince Abdulaziz was also present, shown holding a Saudi flag and standing next to a smiling crown prince.

It was also a sweet moment for host Qatar, facing intense criticism over human rights in the conservative Muslim country. Qatar's emir draped the Saudi flag over his shoulders at the match.

A Doha skyscraper flashed“Congratulations Greens.” ”Wow! I have all the feelings right now. We beat Argentina, one of the great teams!” said Saad from Riyadh who is in Qatar for two weeks and was wearing a green Saudi Falcons scarf. ”Our guys played so well - everything went right inside the stadium today. It was amazing.”

On his fifth and final quest for the only major trophy to elude him, Messi, 35, scored a 10th minute penalty in a dominant first half display by Argentina during which he and Lautaro Martinez also had a combined three goals disallowed for offside.

But Saudi Arabia, the second-lowest ranked team in the tournament after Ghana, threw caution to the wind at the start of the second half, charging at Argentina in front of a frenzied 88,012 crowd to end their opponents' 36-game unbeaten run.

"Thank God, the players were up to it and we wiped them. They were relying on one player, we competed as a team and we wiped them, we are up to it. Watch out for Saudi Arabia because when it hits, it hurts,” said Saudi fan Abdelaziz al-Khwatem.

A Saudi television station showed a long line of cars with veiled women standing in their open sunroofs waving the Saudi flag. Celebrating children gave the victory sign. Other Arab fans were also thrilled, including Tunisians whose team drew 0-0 against Denmark.

"I'm so proud,” said Hoda Salmi, who resides in Qatar, as other Tunisian fans ululated.

"It was a huge joy to see Saudi's win,” said compatriot Yusra Khalil at a fan zone with her husband and two young daughters.“The fact that the World Cup is in Qatar and we're Arabs - it gives us a lot of energy and excitement.”

The entire game was played in an extraordinary atmosphere at the Lusail Stadium, with Argentina's traditionally massive and raucous following matched by the thousands of Saudis who had come over the border to cheer on their team.

We were expecting Saudi would be easy and to score five goals against them. But the strategy of the Saudis at the end was not to let us have the ball at all. They made the goals and that was it,â€ said 21-year-old Argentinian fan Juliana Vega.

Before the match kicked off, the issue of tolerance arose at a news conference between Qatar's foreign minister and his American counterpart. Doha has come under criticism over its treatment of foreign workers and LGBT+ rights.

"It's especially so when the expression is for diversity and for inclusion,” said Blinken, in Doha for a U.S.-Qatar strategic dialogue and who watched the U.S. team's first match on Monday, which they drew 1-1 against Wales.

British Foreign Minister James Cleverly, also speaking on Tuesday, said he brought up being a welcoming World Cup host with Qatar during a visit for the start of the tournament, amid reports that fans wearing rainbow clothing had faced problems.

The Gulf Arab state, which denies discrimination and points to labour reforms enacted, welcomes everyone, its Foreign Minister Sheikh Mohammed bin Abdulrahman Al-Thani said. ”Its doors are open. Let us focus on football and what's happening on the pitch