Advertisement
Home / Sports / Football / Thank God for this game: Ukraine one step away from World Cup after win over Scotland

Thank God for this game: Ukraine one step away from World Cup after win over Scotland

Despite the war at home and months without competitive preparation, Ukraine are one step away from the World Cup 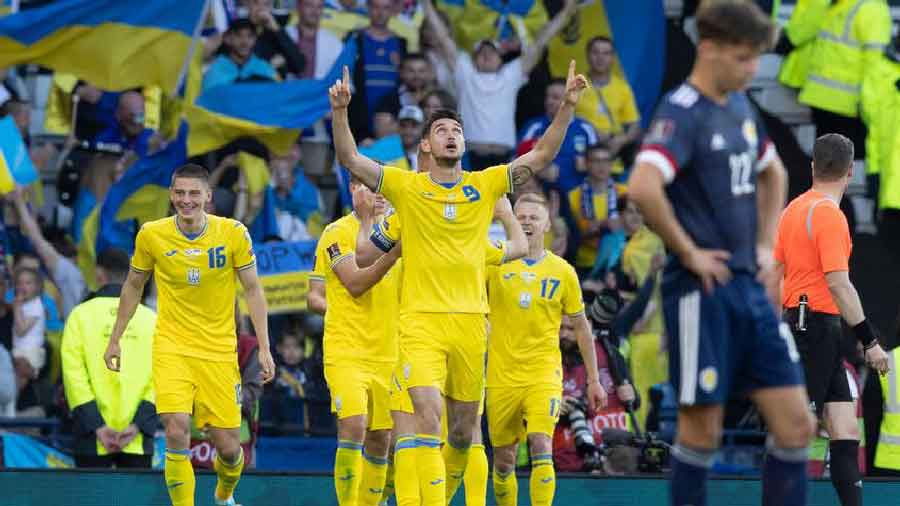 Ukraine at the World Cup? Despite the war at home and months without competitive preparation, Oleksandr Petrakov's team is one step away from Qatar after beating Scotland. Next: a playoff final against Wales in Cardiff.

After 98 days of war following the Russian invasion of their country, Ukraine's exiled national team kept their 2022 World Cup dream alive by beating Scotland 3-1 in a first playoff game in Glasgow.

Scotland poured forward in search of an equalizer which would have taken the game to extra time but, with the four minutes of injury time already up, Ukraine counterattacked, Artem Dovbyk breaking clear to make it 3-1 and set up a playoff final against Wales in Cardiff on Sunday.

"Thank God for this game," Ukraine and Manchester City defender Oleksandr Zinchenko told uefa.com. "We just tried to play our best game and send positive emotions and feelings to all the Ukrainian fans who were watching."

Outside Hampden Park, Scotland fans applauded their Ukrainian counterparts in recognition of both their team's sporting performance and the desperate situation in their homeland.

"We have to be honest and say the better team won," admitted Scotland coach Steve Clarke. "They stopped us having the ball. This was Ukraine's night, not Scotland's."

Ukraine are now just one win away from a first World Cup appearance since Germany 2006 - against a Wales side which lost their Nations League opener 2-1 against Poland on Wednesday.

"Every game is like a final," said Zinchenko. "We've dreamt of the World Cup as a team and now it's just one game away. It'll be a huge game for us. We all need to have the game of our lives, and then we'll see what happens."

Ahead of the Scotland game, Ukraine head coach Oleksandr Petrakov, a man of few words, had told DW about the responsibility he feels in charge of the national team given the current circumstances.

"I feel a great responsibility. For our fans at home, for our armed forces, for the ordinary people who are at home in Ukraine right now," he said. "It's a big responsibility for me and for the boys."

What was once purely a sporting affair has become an important national distraction. "Football is not the most important thing at the moment," explains Ukrainian historian Kateryna Chernii. "But the national team games are an opportunity for the people of Ukraine and the refugees to experience something together. Like the recent Ukrainian Eurovision triumph, there is a yearning for good news."

"It's an opportunity for us to draw attention to the situation in our homeland," midfielder Serhiy Sydorchuk tells DW. But it's an even tougher task than normal for two reasons: firstly a lack of match practice.

As recently as November, Sydortschuk played in the Champions League for Dynamo Kyiv against Bayern Munich. But since the beginning of the winter break, there have been no more competitive matches for Ukrainian clubs or the national team.

To prepare for Scotland, Petrakov gathered his squad abroad near Ljubljana, in Slovenia. Friendlies have been arranged to try and get the squad fit. This has meant a lot of traveling: to Tuscany, Croatia and Germany, where the Ukrainians played against Bundesliga club Borussia Mönchengladbach.

The second reason is perhaps obvious, the players are directly affected by the war.

"We all have the same things in our souls, in our heads, in conversations," explains Sydortschuk.

His coach agrees: "I called my wife and daughter just now. They say it's quiet today, everything's fine. All the boys are calling, everyone is worried about their relatives. Of course, you have doubts," said coach Petrakov.

Some players, like goalkeeper Andriy Pyatov, have been here before. In 2014, he had to flee with his family when pro-Russian separatists declared independence for the Donetsk People's Republic. Since then, his club Shakhtar Donetsk have played in the capital, Kyiv. There, he and his family again had to endure shelling and war.

The Russian invasion remains incomprehensible to Ukrainians. As in many other areas, the two countries were closely intertwined in football. In Soviet times, the joint eleven celebrated its greatest successes under Ukrainian coach Valeriy Lobanovskyi, when they finished runners-up at the 1988 European Championship. In the same year, under the guidance of his compatriot Anatoliy Byshovets, the USSR won Olympic gold against Brazil. For a long time, players from Ukraine formed the spine of the Soviet eleven, with names like Oleksiy Mykhaylychenko or Oleg Blokhin familiar across Europe.

It took a few years after the collapse of the Soviet empire for Ukraine to become a truly competitive team. "But it was precisely during this period that the national team played an enormously important role on the path to becoming an independent nation. It was an anchor of identity for the people of Ukraine," explains historian Chernii.

There are now several of these anchors, but the pull of football is still great, especially at important tournaments. This was really noticeable for the first time at the 2006 World Cup in Germany. Under coach Blokhin, the team were a sensation: they only lost to eventual world champions Italy in the quarterfinals. Since Euro 2012 in their home country, the team in yellow and blue have participated in every European Championship.

"We know the burden on our shoulders," said Sydortschuk ahead of the Scotland game. But, at the same time, he didn't want to complain. The team, he said, is privileged compared to the people at war. "Back home, young men are fighting and dying in the trenches," added Petrakov.

The 64-year-old coach volunteered for territorial defense in Kyiv after the war broke out, but was turned down due to a lack of military experience and his upcoming assignment. Attracting attention, making positive headlines; that is now his mission. The players are determined to give their best in Glasgow, Sydorchuk stresses: "We all live for this game and hope we succeed in everything."

They passed the first test against Scotland with flying colors. Now they need to repeat to trick against Wales on Sunday.