Netherlands and Senegal qualified for the Round of 16 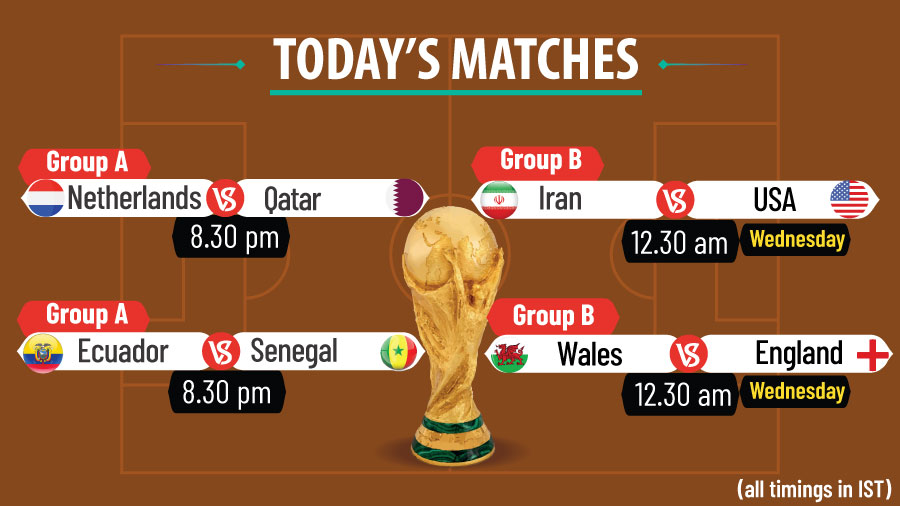 Netherlands (on four points) face hosts Qatar, who are out of Round of 16 race, having not won a single match so far, in a Group A match. The Dutch will enter the next round with a victory over Qatar. Even a draw would be enough for them to qualify as only one of Ecuador and Senegal can get to 5 or more points. In the other match of the Group, Ecuador (4 points) face Senegal (3 points). The former can enter the Round of 16 with a win or a draw. Senegal will qualify if they win the contest.

The Netherlands are on the verge of reaching the knockout stage at the World Cup and an overwhelming favourite in their final Group A match on Tuesday against host nation Qatar.

If the Dutch advance, it will put more focus on 71-year-old coach Louis van Gaal, who stepped out of retirement just over a year ago to take over the national team while being treated for aggressive prostate cancer.

Dutch wish to make it count

Ecuador’s young team is tantalisingly close to a record-equalling last-16 place in the World Cup if they can beat or draw with Senegal in their Group A showdown at the Khalifa International Stadium on Tuesday.

The South Americans have had a good start to the tournament, easily beating hosts Qatar 2-0 before outplaying The Netherlands in a 1-1 draw that made a mockery of the gulf in their world rankings.

The task is clear for the US — to beat Iran in a politically charged  World  Cup  match or go home.

US players have been praised as the best generation of American soccer. But they finished third behind Canada and Mexico in World Cup qualifying and now face a must-win final group-stage match.

“The most important thing is that we control the outcome of our journey in this tournament with the last game against Iran,” midfielder Weston McKennie said. “So the next thing is just to go out and get three points against Iran.”

More than a game in winner-takes-all clash

If England need any added motivation in their final World Cup group game against Wales on Tuesday, they only need to watch a certain video from 2016.

Footage of Wales players celebrating wildly as their UK neighbour crashed out of the European Championship after losing to Iceland went viral at the time.

England were humiliated. Wales, which lost 2-1 to the Three Lions in the group stage but went on to reach the semi-final, was jubilant.