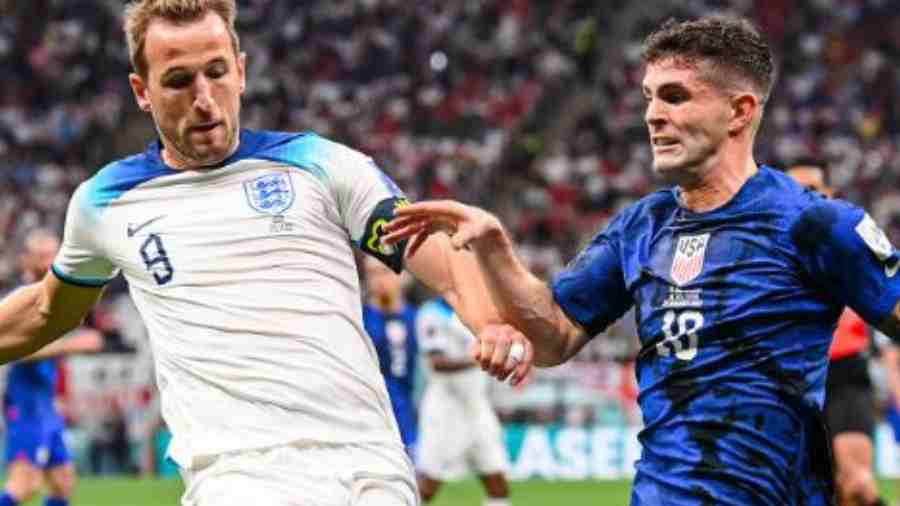 After a 6-2 win over Iran in the opener, England slumped to a goalless draw versus the United States at the ongoing FIFA World Cup in Qatar.

The Three Lions fans will have questions as their team wasn't clinical enough, while their US counterparts will be frustrated with another draw, having been held to a stalemate in their previous outing versus Wales.

The Netherlands, who weren't a part of the 2018 FIFA World Cup, was looking to reach the Round of 16 with a win but Ecuador had other ideas. The Dutch were held to a 1-1 draw. Cody Gakpo's goal ensured the Dutch went into the break with a lead. Ecuador retorted quickly in the second half, scoring a goal within five minutes of restart. The score stands at 1-1, with nothing separating them as the second half unfolds.

9:30 PM, Netherlands versus Ecuador: Next round carrot in big game

Ecuador or the Netherlands will take a huge step towards the second round of the World Cup if either can force a victory in Friday’s Group A clash at the Khalifa International Stadium after both sides won their openers in Qatar.

But while Ecuador have set their target of advancing to the round of 16, as they did in Germany in 2006, the Dutch will be looking for a vastly improved performance to back up coach Louis van Gaal’s assertion that they can go on and win the World Cup.

Next round carrot in big game

No more comeback for Qatar as Senegal secure a 3-1 win. The defeat also puts the hosts on brink of elimination.

After a 0-2 defeat in the FIFA World Cup 2022 opener against Ecuador, hosts Qatar will look to return to winning ways against Senegal at the Al Thumama Stadium on Friday.

Senegal captain Kalidou Koulibaly has challenged his younger teammates to produce an improved performance in their next match against World Cup hosts Qatar as the African champions seek to revive their chances.

Koulibaly said he still believed Senegal could advance to the next round despite starting their Group A campaign with a 2-0 loss to The Netherlands on Monday.

Catch your breath and get ready for the next one

Iran beat Wales 2-0 in their Group B clash

Iran scored twice in the final moments of stoppage time to keep alive their hopes of reaching the World Cup knockout stages for the first time with a thrilling last-gasp victory over a stunned 10-man Wales, reports Reuters.

Wales, who had keeper Wayne Hennessey sent off late in the match, looked to have survived the Iranian onslaught in their Group B encounter at Al Rayyan's Ahmad Bin Ali Stadium, before substitute Rouzbeh Cheshmi found the net and Ramin Rezaeian sealed the win with seconds left.

Iran had come out fighting in the second half and hit the post twice in a matter of seconds, with Sardar Azmoun's shot rebounding to Ali Gholizadeh, whose follow-up cannoned off the upright and back to the waiting Azmoun, who headed tamely into keeper Hennessey's hands.

Iran, whose World Cup squad has been distracted by a political crisis at home, came close again on 72 minutes when Hennessey got a fingertip on Saeid Ezatolahi's shot, then piled on the pressure after Hennessey was sent off for dangerous play when he charged out of his area and clattered into the onrushing Mehdi Taremi.

Wales goalkeeper Wayne Hennessey gets the first red card of FIFA World Cup 2022 for a dangerous tackle on the field, according to media reports.

Wales and Iran were goalless at the end of the first half of their World Cup Group B match at the Ahmad bin Ali Stadium on Friday, after Iran forward Ali Gholizadeh's strike was ruled out for offside, according to Reuters.

Gholizadeh thought he had given Iran an early lead after linking up brilliantly with Sardar Azmoun, but VAR ruled it out. Earlier, Wales striker Kieffer Moore had a shot from close range saved by Iran keeper Seyed Hossein Hosseini.

All square at the break.

Wales captain Gareth Bale will become their most capped player of all time when he makes his 110th appearance in their second Group B game against Iran on Friday, reports Reuters.

Bale overtakes team mate Chris Gunter, who is on the bench for the game at the Ahmad bin Ali Stadium.

Target man Kieffer Moore will start after he came on and changed the game in their opener against the United States, while midfielder Joe Allen is fit enough to return to the bench after recovering from a hamstring injury.

Iran goalkeeper Alireza Beiranvand misses the game after getting concussed and breaking his nose in their first game against England and is replaced by Seyed Hossein Hosseini. Iran striker Sardar Azmoun returns to the lineup after starting on the bench against England.

Iran, in last place in Group B after a 2-6 loss to England, face Wales on Friday at Ahmad bin Ali Stadium.

First one of the day