Reds head into Christmas three points behind Manchester City, who won earlier in the day, while Spurs are in seventh spot with 26 points 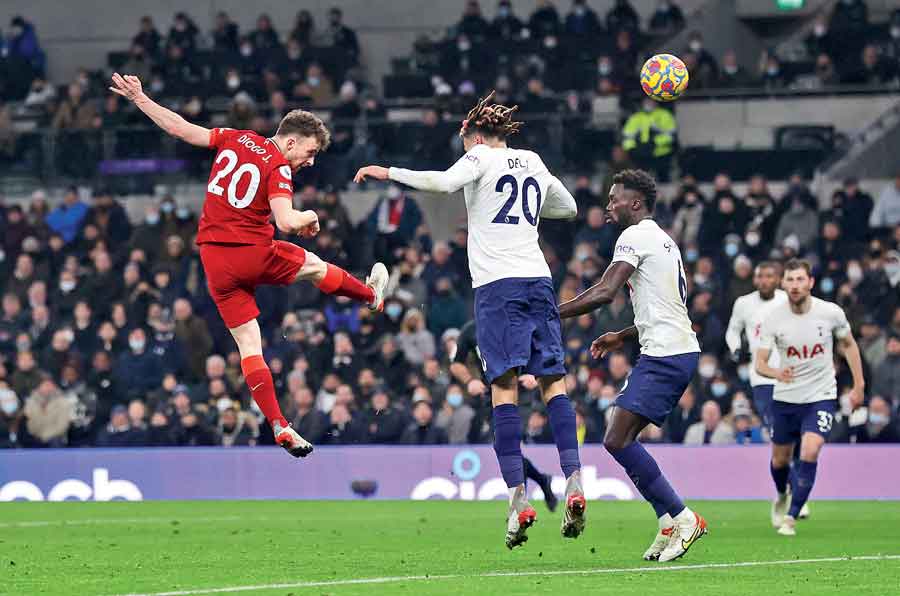 After a weekend of Covid-19 related postponements, Tottenham Hotspur and Liverpool raised the spirits with a rip-roaring 2-2 draw in a pre-Christmas Premier League classic, on Sunday.

A mistake by Liverpool keeper Alisson gifted Tottenham’s Son Heung-min a 74th-minute equaliser after the Juergen Klopp’s visitors had replied to Harry Kane’s early opener with goals by Diogo Jota and Andy Robertson.

Liverpool, who failed to win for the first time in nine games in all competitions, ended with 10 men after Robertson was shown a red card for a wild tackle late on.

Tottenham had not played for a fortnight after having two league games postponed after a Covid-19 outbreak, but produced a vibrant display and wasted numerous gilt-edged chances.

In the end a draw was a fair outcome from a game that lifted the gloom on a murky, cold afternoon in north London. Liverpool head into Christmas three points behind Manchester City, who won earlier in the day, while Tottenham are in seventh spot with 26 points, but with games in hand over the teams immediately above them.

Manchester City’s Joao Cancelo scored one goal and made another as they overwhelmed struggling Newcastle United 4-0.

The visitors were gifted the opening goal in the fifth minute when Cancelo acrobatically crossed for Ruben Dias to head into an empty net after a mix-up between Newcastle goalkeeper Martin Dubravka and defender Ciaran Clarke.

Cancelo added a second in the 27th minute, cutting in from the right wing and capping off a solo run with a stunning strike to silence the home crowd.

Newcastle were denied what looked to be a clear penalty on the half-hour mark when City keeper Ederson clattered into Ryan Fraser, but neither referee Martin Atkinson nor the VAR decided to intervene.

“I am not too sure what happened with VAR and the referee, the goalkeeper wipes out Ryan and it is a clear penalty,” Newcastle manager Eddie Howe said.

Things got worse for Newcastle as Mahrez turned home Kevin De Bruyne’s cross from the left with a deft volley in the 63rd minute to notch his 50th Premier League goal after a lengthy VAR review.

“I was quite sure I was onside as I saw the defender running with me so I didn’t think I was offside,” Mahrez said.

Chelsea’s title ambitions suffered a further blow after they were held to a goalless draw by Wolverhampton Wanderers at a misty Molineux Stadium, a match the visitors had asked the Premier League to postpone before kick-off.

The home side came closest to breaking the deadlock when Daniel Podence had the ball in the back of the net, but the effort was correctly ruled out after striker Raul Jimenez strayed offside in the build-up.

Chelsea, who had only six players on the bench including two goalkeepers after seven Covid-19 infections depleted their squad, had asked the league to postpone the game.

Manager Thomas Tuchel said Chelsea were “angry” at the decision to play, one he felt was “very hard to understand”.

“I don’t care about the point. I am pleased with the performance, especially in the second half. The first half was a bit of a struggle for us, we had to grow into the game,” Tuchel said. “Some players had to adapt to new positions. We are not lucky enough in these moments to win games but I am happy with how we played.”