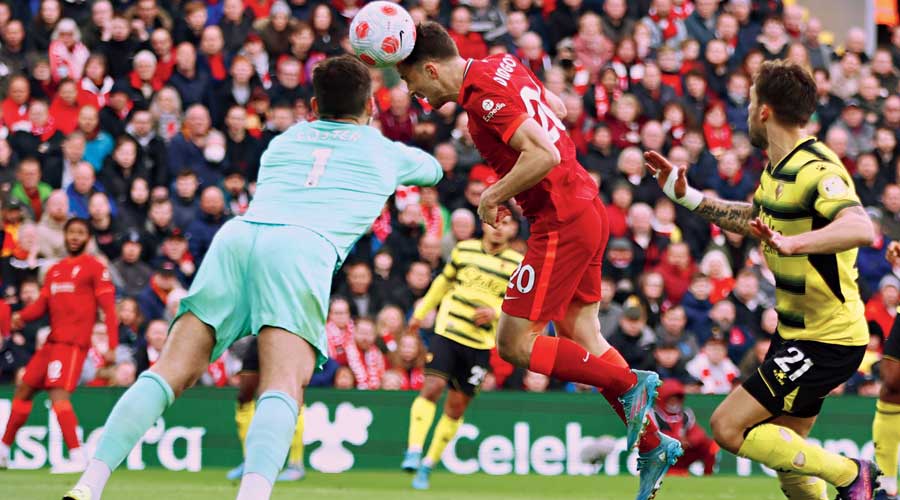 Manchester City moved back to the top of the Premier League standings with a convincing 2-0 win at relegation-threatened Burnley on Saturday.

Needing a win to reclaim top spot after title rivals Liverpool beat Watford in an early kick-off, first half goals from Kevin De Bruyne and Ilkay Gundogan sealed all three points for Pep Guardiola’s side.

City dominated possession throughout and they made a perfect start by taking a fifth-minute lead after De Bruyne pounced on Raheem Sterling’s cushioned pass inside the box and pulled the trigger to find the top corner.

Sterling and De Bruyne were instrumental in doubling City’s lead 20 minutes later when a quick one-two pass allowed the English forward to sprint down the right flank and cross into the box for Gundogan to score.

City had a wake-up call in the second half when Burnley nearly got one back as Maxwel Cornet’s header was cleared off the line by Nathan Ake. Although Cornet was later flagged offside, the move spurred Burnley to press for a goal.

But City improved soon after and they could have scored more. The result moved them a point clear of Liverpool while Burnley’s fourth consecutive defeat leaves Sean Dyche’s side 19th, but with games in hand over the relegation battlers.

Liverpool manager Juergen Klopp said he did not expect his team to play their best game of the season immediately after the international break and praised them for rising to the challenge in an uncomfortable game against Watford.

“These games can go either way. If you score early on, then just get in a flow, it can go in one direction. But it’s really unlikely that after the international break you see the best game of the season,” Klopp told reporters.

Klopp said former Liverpool manager Roy Hodgson had drilled his relegation-threatened Watford side to make life tough for the title contenders at Anfield but the result mattered more than the performance.

Chelsea centre back Antonio Rudiger brought the game to life after a dull first half at Stamford Bridge when, three minutes after half-time, his screamer of a shot from about 35 metres flew in off the post.

Mbuemo then assisted Brentford’s second with a pinpoint pass to Eriksen for the Dane to score his first goal for his new team in the 54th minute.

Eriksen, whose career had been in doubt after he collapsed on the pitch during the European Championship last year, had also scored twice in two games for his country during the recent international break.

Janelt sent the away end of Stamford Bridge into raptures in the 60th minute with a looping shot from an Ivan Toney pass. Substitute Wissa put the icing on the cake in the 87th minute to condemn a lacklustre Chelsea to their first home defeat since September.