World Cup 2022: Portugal ready to let their game do the talking

Ronaldo, who parted ways with Manchester United on Tuesday will hope to let his skill do the talking 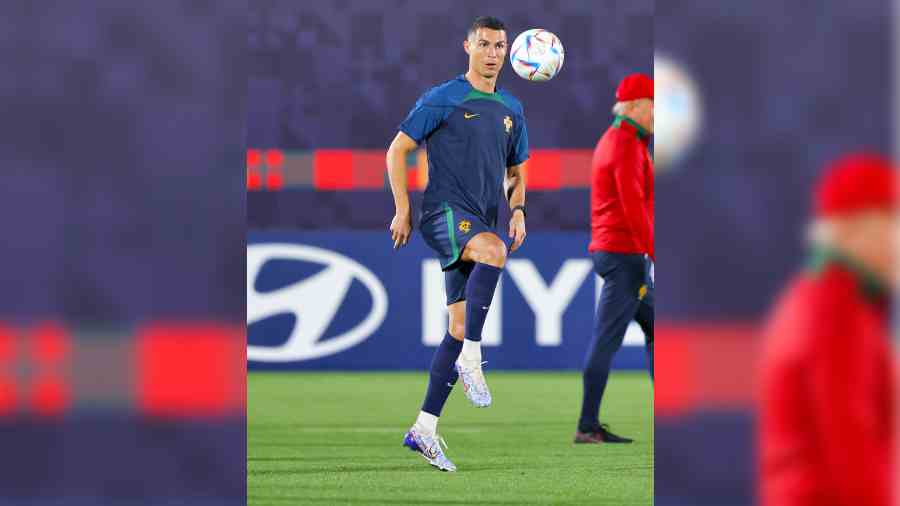 Cristiano Ronaldo, now a man without a club, will hope to start his World Cup for his country on a better note than his rival claimant to greatness Lionel Messi when Portugal take on Ghana to begin Group H play on Thursday.

Messi and Argentina shockingly fell to Saudi Arabia 1-2 in their opening match on Tuesday. Ronaldo, who parted ways with Manchester United on Tuesday after sparking a furore with his attacks on the club and its coach, will hope to let his skill do the talking if Portugal are to avoid the same fate against a historically pesky World Cup opponent. This time, Ghana, at No. 61. are the lowest-ranked team in the World Cup but also the youngest.

The only other time these two teams met, Ronaldo scored an 80th-minute winner as Portugal won 2-1, but it wasn’t enough as both teams were eliminated from the 2014 World Cup group stage behind Germany and the US.

This time, it’s an equally difficult group with matches against Uruguay and South Korea looming. Both teams would therefore like to start with full points at the 974 Stadium.

Ronaldo,  who led Portugal to a Euro triumph in 2016, doesn’t appear to have a new club lined up so his performances at the World Cup might yet convince potential suitors to take the plunge on the five-time Ballon D’Or winner. At 37, he maybe past his prime but remains one of the most lethal finishers on his day.

He is looking to become the first player to score at five different World Cup finals. All of Ronaldo’s seven goals in the tournament have come in the group stage.

He has scored the most goals of any player in the competition who is yet to find the net in the knockout stages (six such appearances without a goal).

But there is also talk of tension in the squad and worries among fans that the team is too focused on serving Ronaldo.

“The environment in the changing room is excellent. No problems,” Ronaldo said on Monday. “The group is shielded. And I take this opportunity to say: stop asking about me.”

His teammates have insisted Portugal will not be distracted by the furore surrounding Ronaldo after his inflammatory interview with Piers Morgan that triggered his exit from Old Trafford.

Lining up against them for Ghana are likely to be Arsenal midfielder Thomas Partey, Leicester City defender Daniel Amartey and Athletic Bilbao striker Inaki Williams, who has switched allegiance from Spain.

Coach Otto Addo, Ghana’s third manager in 12 months, has sought to rebuild the team after a disastrous showing at the Cup of Nations in early 2022, bringing in more European-born players such as Brighton & Hove Albion wingback Tariq Lamptey.

But his plans suffered a setback when both of his leading goalkeepers suffered injuries, meaning third-choice Lawrence Ati-Zigi, who plays at St Gallen in Switzerland, will be entrusted to keep out Ronaldo and his colleagues on Thursday.

Written with inputs from Reuters, AP/PTI