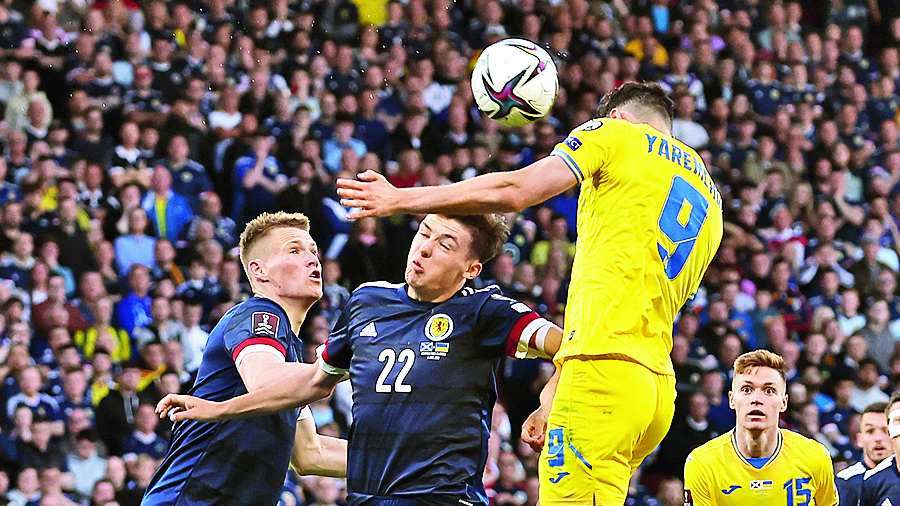 After a night that they will never forget, Ukraine’s players will waste little time reflecting on the emotions and exhilaration generated by their 3-1 win over Scotland at Hampden Park on Wednesday as a World Cup decider against Wales looms.

Ukraine’s first goal came 32 minutes into the match, deftly arced into the net by the team’s captain, Andriy Yarmolenko. The team scored again about 15 minutes later on a header by Roman Yaremchuk. After several near misses, Scotland later scored, coming within one goal of a tie, but Ukraine sealed the win with another goal in the final moments.

A squad which had not played together since Russia’s invasion of their country in February, now has just three days to get ready to go all out again on Sunday in Cardiff with a place in November’s World Cup finals the prize.

Midfielder Oleksandr Zinchenko, one of several outstanding performers against the Scots, has no doubts that the team will be ready to take on a Wales side looking to secure their first World Cup finals appearance since 1958.

“There is no time to rejoice. It’s time to recover. Each of us is a professional who needs to know what he needs to do for this,” said the Manchester City player.

If the celebrations from the Ukraine fans in the stadium on Wednesday, over 2,000 of them drawn from around the UK and even as far away as Australia, were not enough of a reminder of what the victory meant to the war-ravaged nation, the messages they received after the match made it abundantly clear.

Ukrainian President Volodymyr Zelenskiy posted a picture of the team celebrating on the Telegram app, accompanied by a brief message: “Sometimes you don’t need a lot of words! Just pride — They went out, fought, persevered and won. Because they are Ukrainians!”

But these playoffs are not just about returning to the field as a symbol of the country’s resistance — Ukraine are chasing the dream of a place in the World Cup finals for only the second time since the country’s independence in 1991.

“This victory is for all Ukrainians, for those who are now at the forefront. We are with them. But so far we have done 50 per cent of the task. The most important thing is the next match,” said midfielder Ruslan Malinovsky.

Fight till the end

Ukraine coach Oleksandr Petrakov said the win over Scotland had been a victory for his compatriots who “fight with every last drop of their blood”.

Petrakov said he had been left exhausted by the 90 minutes. “I have no emotions, all emotions are left out on the pitch. This victory is not for me, not for our players but for our country, so it was a huge victory for Ukraine,” he told reporters.