The No.10 is still missed in Camp Nou, but going by Lewa’s current form, the striker is fast becoming the darling of the fans 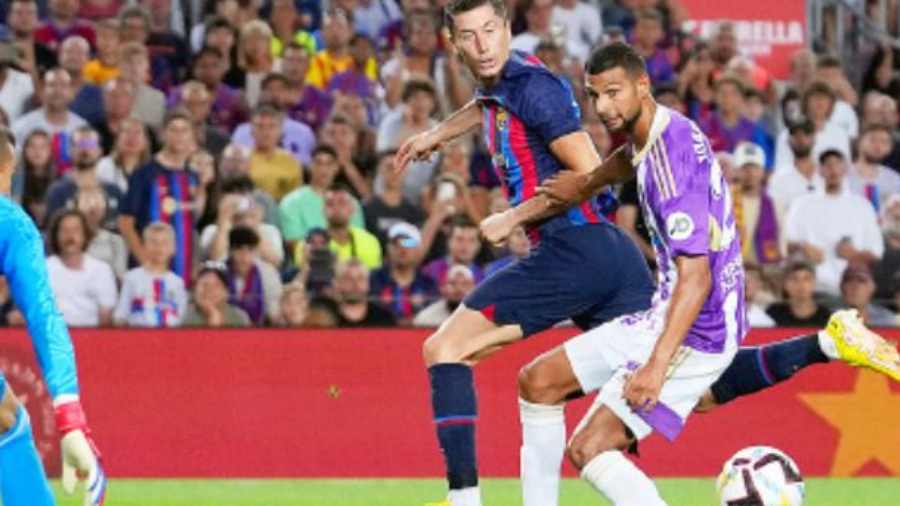 A defender moved in front of him, blocking his view inside the area, but Robert Lewandowski stayed calm. Barcelona’s marquee signing from Bayern Munich spotted a gap, then quickly used his backheel to gently send the ball into the far corner. It was a beautiful goal, a goal Barcelona icon Lionel Messi would have been proud of.

The No.10 is still missed in Camp Nou, but going by Lewandowski’s current form, the striker is fast becoming the darling of the fans.

Lewandowski  continues to make scoring look easy, whether its the Bundesliga or the La Liga. The Poland striker found the net twice on Sunday to lead the Catalan club to a 4-0 rout of Valladolid in the Spanish league.

Real Madrid relied on Karim Benzema, its trustworthy striker for years, to maintain a perfect start with its third straight away victory. Benzema scored in the 88th minute and deep into stoppage time to give the defending champion a 3-1 win at Espanyol.

It was the third league goal for Benzema, while Lewandowski took his tally to four. Barca’s star signing had also scored a double in the 4-1 victory at Real Sociedad last weekend. He was also twice denied by the woodwork at the Camp Nou on Sunday.

“He is extraordinary,” Barcelona coach Xavi Hernández said of Lewandowski. “He is a natural leader who has been helping us greatly.” Real Madrid sit top of the table on nine points, level with Real Betis. Barcelona and Villarreal are right behind on seven points, with Osasuna and Real Sociedad on six.

Not too far away from Barca’s Camp Nou, Vinicius Jr opened the scoring against Espanyol early in the first half with a first-touch finish from a brilliant pass by Aurelien Tchouameni.

The young French midfielder put in another solid performance in place of the departed Casemiro, who left the club after signing for Manchester United.

Tchouameni added an extra dimension to the Real midfield and showed why they agreed to pay a potential $99.49 million fee to Monaco for the 22-year-old France international.

Real were in control until Joselu levelled from a rebound right before half-time and, roared on by their fans, Espanyol put up a fight against the Champions League and La Liga champions, dominating most of the second half. Yet two minutes from time, Rodrygo found Benzema at the far post with a perfect cross and the French striker put Real Madrid back in front.

In added time, the video assistant referee spotted a foul by Lecomte on Dani Ceballos in what was considered a clear goal-scoring opportunity on the edge of the area.

Lecomte was shown a red card and Benzema took charge of the free kick, bending it into the bottom corner to wrap up the points. “It was not easy and it will not be easy,” coach Carlo Ancelotti said. “We started very well, we scored but then we went down.”

Neymar won and scored a penalty as Paris Saint-Germain rallied to draw 1-1 at home to Monaco and stay in first place in the French league. Neymar on Sunday latched onto Messi’s pass down the left and cut inside central defender Guillermo Maripan, who appeared to catch him with an outstretched leg. The referee waved away PSG’s penalty claims but then awarded the kick following a video review.