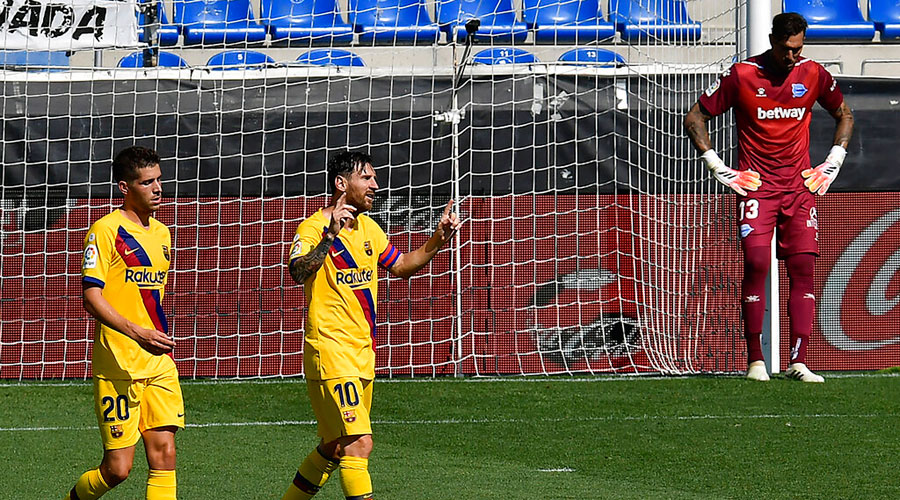 Lionel Messi finished as the top scorer in La Liga for a record seventh time after netting twice as dethroned champions Barcelona ended their disappointing campaign on a high with a resounding 5-0 win at Alaves on Sunday.

Barca finished the season second in the standings on 82 points, five behind newly crowned champions Real Madrid, who drew 2-2 at Leganes later on Sunday. A late goal by Real Sociedad substitute Adnan Januzaj secured a 1-1 draw at Atletico Madrid and help them finish sixth to secure a Europa League spot.

The Argentine, who also finished as top marksman for a fourth consecutive season, eclipsed the benchmark he previously shared with the late Telmo Zarra but said he would rather have won the league.

“Individual prizes and objectives are secondary. It’s an important achievement to win it seven times but I would have liked it to have been accompanied by the La Liga title,” Messi said.

The Barca captain had made headlines on Thursday following his angry post-match interview after the 1-2 loss to Osasuna, blasting the team as weak and inconsistent, also appearing to criticise the running of the club.

But he was in a happier mood after the dominant performance against Alaves, saying the team felt more confident ahead of next month’s Champions League last-16 second leg game with Napoli, which they host with the score tied at 1-1.