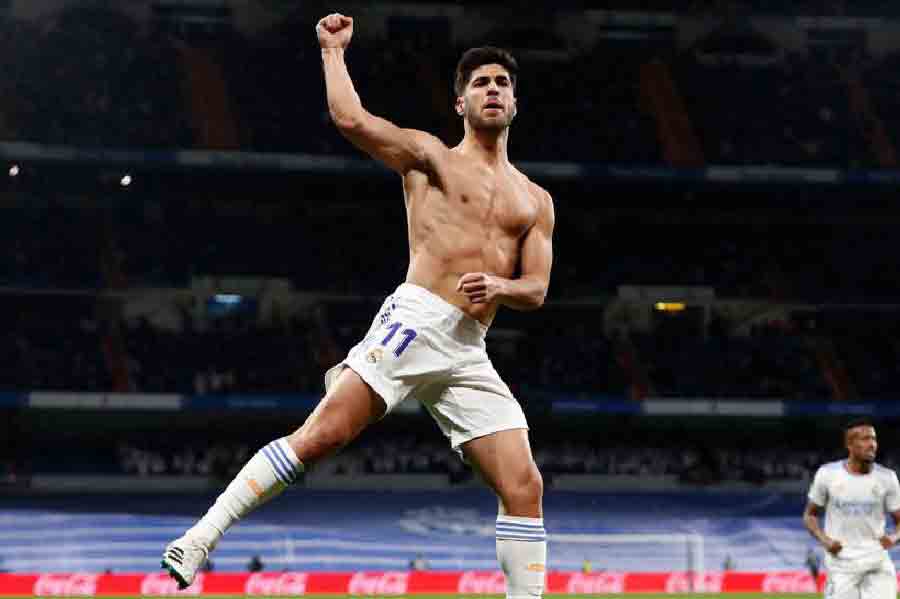 Marco Asensio’s second-half goal secured three points for Real Madrid as they won 1-0 at home against Granada, who put in an almost-perfect defensive performance in La Liga on Sunday. Asensio found a way past Granada’s defensive wall with a brilliant angled shot from outside the box.

After second-placed Sevilla drew 0-0 at Osasuna on Saturday and third-placed Real Betis lost 2-0 at home against Villarreal, Real Madrid extended their lead at the top to six points.

Missing four key starters, Real Madrid completely dominated the match and finished with almost 70 per cent possession and 10 shots on target against only three from Granada.

Karim Benzema, league’s top scorer with 17 goals, was missing his second consecutive game with a leg muscle injury, while Vinicius Jr., who is second only behind his team mate on the scorers’ list with 12 goals, was suspended. Casemiro and Lucas Vazquez were left out at the last minute due to stomach bugs.

Even with those players out, Ancelotti started with Gareth Bale and Eden Hazard on the bench, with both players out of favour with the coach. Without a natural striker, Ancelotti used Isco and Marco Asensio as forwards.

Real turned the screw after the break but Granada held firm until Asensio recovered a loose ball just outside the visitors’ area and rifled home an outstanding strike.

“It was a very difficult match, it demanded a lot from us from the first minute,” Real’s Marcelo told reporters.

Barcelona manager Xavi Hernandez urged fans not to jeer winger Ousmane Dembele after the France international was greeted with a chorus of boos on his return to the squad in Sunday’s win over Atletico Madrid at Camp Nou. He was an unused substitute in Sunday’s match.

“The fans were 10 of 10 and the support was brilliant throughout the game,” Xavi told a news conference. “But I would like them to support Ousmane, too. I’d ask them to stop booing him. The idea was for him to come on, but I decided on other things because of the red card and the way the game went,” Xavi said, referring to Dani Alves’ sending-off in the 69th minute.