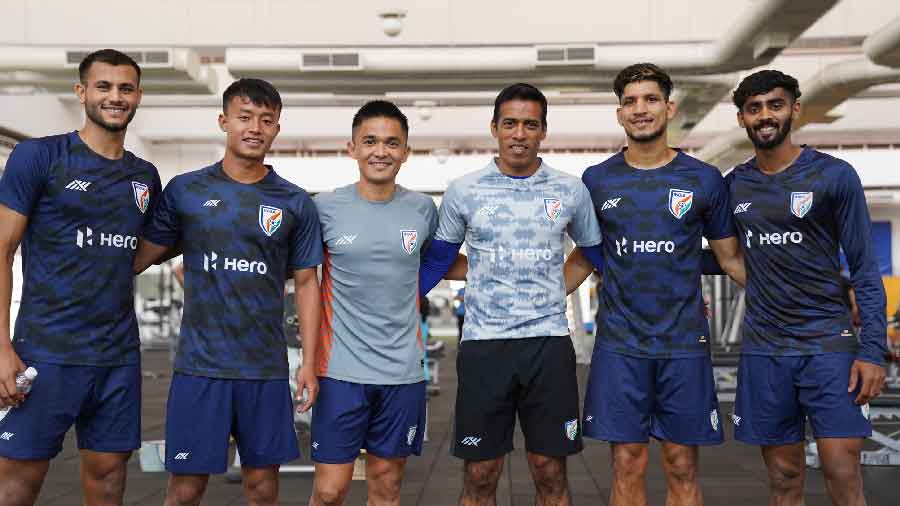 Captain Sunil Chhetri (third from left) with some other members of the Indian contingent
Twitter/@chetrisunil11
New Delhi   |   Published 23.06.22, 04:07 PM

The Indian football team reaped a good harvest of its impressive Asian Cup qualification campaign as it gained two places to jump to 104th in the latest FIFA world rankings released on Thursday.

The Blue Tigers are placed just below New Zealand (103rd), who missed out on a 2022 FIFA World Cup spot after losing to Costa Rica 0-1 in the intercontinental play-off earlier this month.

The Sunil Chhetri-led side had their best ever Asian Cup qualification campaign earlier this month when they won all three of their league matches to top group D and secure a place in the 24-team Finals to be held in 2023.

This was India's fifth overall qualification and the first time the country qualified for back-to-back Asian Cups.

In the overall rankings, Brazil remained on top, three months after taking the top spot from Belgium (2nd).

Argentina jumped one place to third at the expense of France (4th) who paid the price for four winless games in the UEFA Nations League.

The next FIFA world ranking will be out on August 25.

Man of the moment