Arsenal manager Arteta's reaction: He needs more experience with trophies, we can get him more used to that 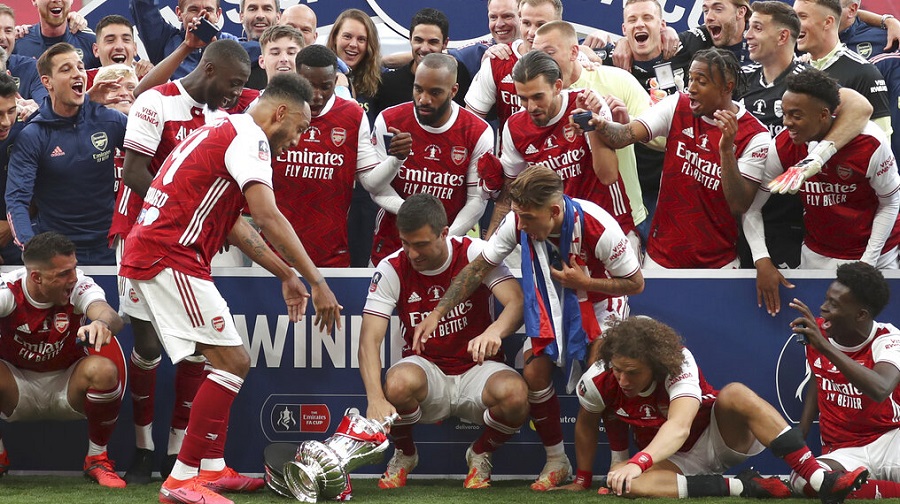 Pierre-Emerick Aubameyang drops the trophy while celebrating with teammates after their FA Cup final match against Chelsea on Saturday
AP
Agencies   |   London   |   Published 03.08.20, 04:12 AM

The only time Pierre-Emerick Aubameyang looked uncertain was when it came to collecting the FA Cup.

Two goals from the forward had turned around the final for Arsenal, sealing a 2-1 victory over Chelsea on Saturday in the first cup final to be staged without fans. The coronavirus restrictions also meant there was no Prince William at Wembley Stadium to hand over the silverware in the Royal Box.

So Aubameyang had to pick up the cup himself on the field as captain. Taking the base as well, no wonder Aubameyang dropped it. “I saw him walking with the bottom bit attached,” Arsenal defender Rob Holding said, “and I was like, ‘You need to take that off!’”

The Cup was soon raised aloft, with gold streamer showering the Arsenal squad in a mostly-empty 90,000-capacity stadium after the 139th final of the world’s oldest football competition.

“He needs more experience with trophies, we can get him more used to that,” Arsenal manager Mikel Arteta said. “I think he wants to stay and it is just about getting the deal done.”