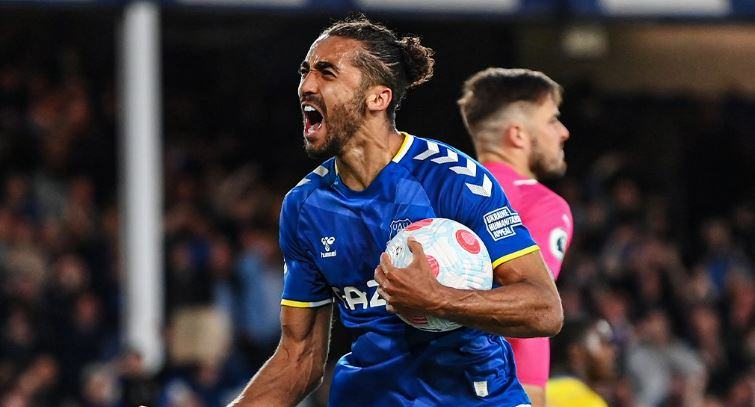 Everton secured their Premier League status as Dominic Calvert-Lewin scored five minutes from time to snatch a thrilling 3-2 victory over Crystal Palace after they rallied from two goals down at a rocking Goodison Park on Thursday.

Everton needed a win to ensure they continued their 68-year top-flight stay and Calvert-Lewin, who has been a peripheral figure this season due to injury, headed a Demarai Grey free-kick in at the Gwladys Street end to spark a pitch invasion.

Jean-Philippe Mateta and Jordan Ayew, who could have had a red card moments earlier, scored first-half goals for mid-table Palace but Everton responded after the break with goals from Michael Keane and Richarlison before Calvert-Lewin’s winner.

Everton move to 39 points from 37 games, four clear of relegation rivals Burnley and Leeds United, which ensures they go into Sunday’s final game of the season at Champions League-chasing Arsenal with the pressure on them since January now off.

“It was unbelievably special,” Calvert-Lewin told Sky Sports.“The amount of pressure that we were under, going two goals down and then to get to 2-2, I just felt that another chance would come.

“I just had to make sure I was in the right area. It was an incredible experience.

“You can go from low to high so quickly. It is the biggest weight in the world that has been lifted!”

Everton manager Frank Lampard was close to tears at the final whistle. “In my career, I’ve been fortunate to have amazing times, especially at Chelsea as a player and a coach,” said Lampard.

“But when you feel the desperation of what relegation brings, it is something different.

Lampard celebrated wildly at the final whistle and then with fans up in the stands as supporters poured onto the Goodison Park pitch in celebration.

“I thought I might cry, I might jump out of my own body,” he said, before defending the pitch invasion.

Palace manager Patrick Vieira was involved in an altercation with a fan after Thursday’s match and could face a Football Association investigation into the incident.

Vieira was walking towards the away dressing room after the final whistle when one fan appeared to provoke the former France international with hand gestures, after which Vieira kicked him to the ground and had to be led away by other supporters.

Chelsea defender Marco Alonso scored a glorious equaliser to earn a 1-1 home draw with Leicester City and effectively seal third place. The draw lifted Chelsea to 71 points, 19 behind leaders Manchester City and three ahead of Tottenham Hotspur in fourth, but Chelsea’s far superior goal difference means Spurs have no realistic chance of overtaking them.

While they will be delighted to seal third place, Chelsea will be disappointed not to win a game that saw them produce 27 shots but only the one goal as they dominated possession.

Burnley moved out of the relegation zone following a 1-1 draw at Aston Villa, keeping their Premier League survival in their own hands heading into the final day of the season.

A cool penalty by Burnley striker Ashley Barnes and several superb saves by keeper Nick Pope earned Mike Jackson’s side a crucial point in their battle to survive as they climbed to 17th in the table on 35 points.

A home win over Newcastle United on Sunday would ensure Burnley avoid the drop regardless of what 18th-placed Leeds do at Brentford.