Advertisement
Home / Sports / Football / Euro 2022: Now that the party's over, where does the women's game go from here?

Euro 2022: Now that the party's over, where does the women's game go from here? 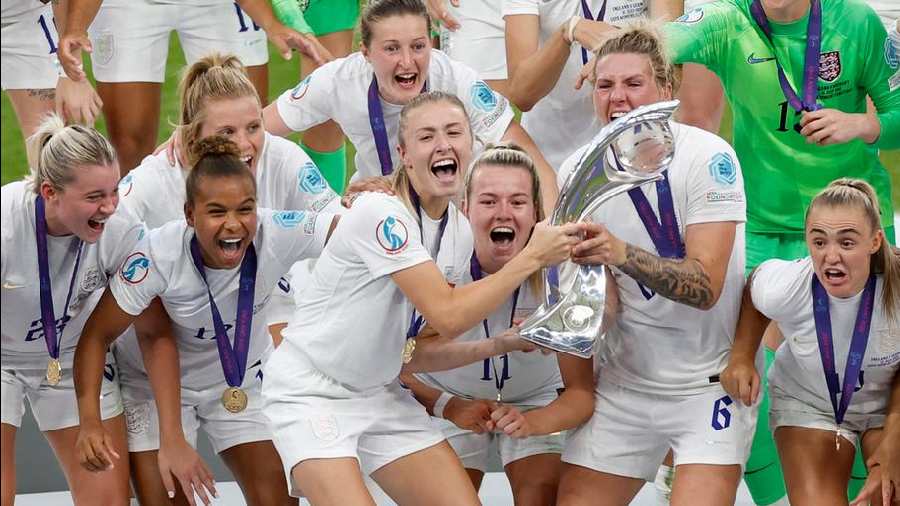 Chloe Kelly's scrappy winner for England was an incongruous end to a tournament where the most significant impact was that talk revolved more around teams, tactics and backheels than growth, equality or legacy.

But from the wide-eyed, record-breaking crowd that watched a nervous England win at Old Trafford back on July 6, to an absorbing final between Euro 2022's two outstanding teams on Sunday, this tournament felt like a new high watermark for the game in Europe.

"It's been great that we have been able to have the whole tournament in the spotlight," Germany coach Martina Voss-Tecklenburg said on the eve of the final.

"It's not only our games, all the games have been really good. We've confirmed that it [building the game] is not all about marketing and fans, it's also about how this is a great tournament in a purely sporting sense."

Although a serious knee injury sustained the day before the opener robbed fans of the current Ballon d'Or winner, Alexia Putellas, the group stage saw a glut of excellent technical and tactical team performances: Germany's calculated dissection of Denmark, France's rapid dismissal of Italy, England's evisceration of Norway and the slow-burning draw between the Netherlands and Sweden.

The knockouts proved to be of similarly high quality, although the two finalists demonstrated a range of tactical options that set them apart from the rest.

But an analysis from "The Athletic" released before the final found that the quality of football generally improved enormously from Euro 2017. Pass completion was up 6% to 77%. In the final third before the opponent's goal, that figure jumped from 57% to 64%. Errors leading to goals were down, crossing accuracy and shot conversion were up.

Given the relative infancy of the international game, progress is to be expected at this stage in its development, but this is rapid. Professionalization has played a huge part, particularly in England, where the Women's Super League became fully professional in 2018.

"It's a very, very good league with very good players. And playing here now for Everton, the pitches and the facilities we have are so professional compared to Sweden. Even though I was playing for a good team in Sweden [Rosengard], it's like night and day,” Sweden's Nathalie Björn told DW.

The Scandinavian teams, once powerhouses of the women's game, are now struggling to keep up.

The rapid pace of change in England, and to a lesser extent, Spain, France and Italy, has left Germany's Bundesliga struggling to keep up. As Germany's Euros record shows, the country has long been a dominant force on the continent, but attendances and finances in the Bundesliga are lagging behind.

"We want more equality of talent, better stadiums, we want to get more spectators, we want more time on TV, different kickoff times," said Voss Tecklenburg, who went on to emphasize that sustaining the momentum forged by her team in England was critical to the future of the game in Germany.

The pace of progress in other leagues has inevitably meant money is increasingly pegged to success. But in all of those leagues, the successful women's clubs are tied to powerful men's sides and most rely heavily on them for funding. Essentially, the men's clubs use a small proportion of their revenue to fund the women. Any money spent on women's football is exempt from UEFA's financial fair play laws.

This has made it all but impossible for clubs without such links to compete at the very top and means women's clubs must start to strengthen their own revenue streams if they are to grow in their own right.

Such disparity is not restricted to the clubs. At Euro 2022, nine of the 24 group games were won by margins of three goals or more. Although the positivity of this tournament is well-founded, there is no time to rest on any laurels for UEFA and national associations.

Make the most of momentum?

Domestic seasons will soon restart and clubs and leagues know they must try to capitalize on the tournament's success. Tottenham Hotspur have been quick out the blocks, announcing their 2022-23 season opener against Manchester United will be played at their men's stadium. So far, there has been no such announcement in the Bundesliga.

According to organizers UEFA, the total attendance for Euro 2022 was almost 575,000. Among those who attended, almost 100,000 were children, while 47% of all fans in the stadiums were female. Tens of thousands had traveled from abroad for the tournament.

UEFA's head of women's football, Nadine Kessler, called Euro 2022 an "unforgettable event for a whole generation" but the Euro 2013 winner as a player with Germany will also know this is a significant milestone in a long haul. While UEFA are rightly proud of attendances, the tournament was not without issues.

While sellouts are great, they also beg the question as to whether the mix of stadiums was correct. England's games in particular could have sold out multiple times over. Were stadiums in Brighton (capacity 31,800) and Southampton (32,384) really the right place for them in the group stage? Were Bramall Lane (32,050) and the MK Stadium (30,500) big enough for semifinals?

The answer is, probably not. Iceland players started to question the issue early on, when they found out they were playing at Manchester City's academy stadium.

But it should be acknowledged that no other grounds applied when the stadium tender was announced a few years before the tournament, so organizers' hands were tied to a degree. Despite these shortcomings, the players were still taken aback by the level of support.

Sunday's attendance of 87,192 was the highest for any Euros match, men or women's, in history, breaking the record set in 1964, when Spain's men played the Soviet Union in front of 79,115 at the Bernabeu in Madrid.

And the growth of the women's game highlighted by this tournament is undeniable. Whether the pace of this growth can be sustained without its inequalities mirroring the men's game is a key question. But it's one that can wait.

For now, the whole of England will party. Perhaps more importantly, in the parting words of England coach Sarina Wiegman's final press conference: "We changed society."