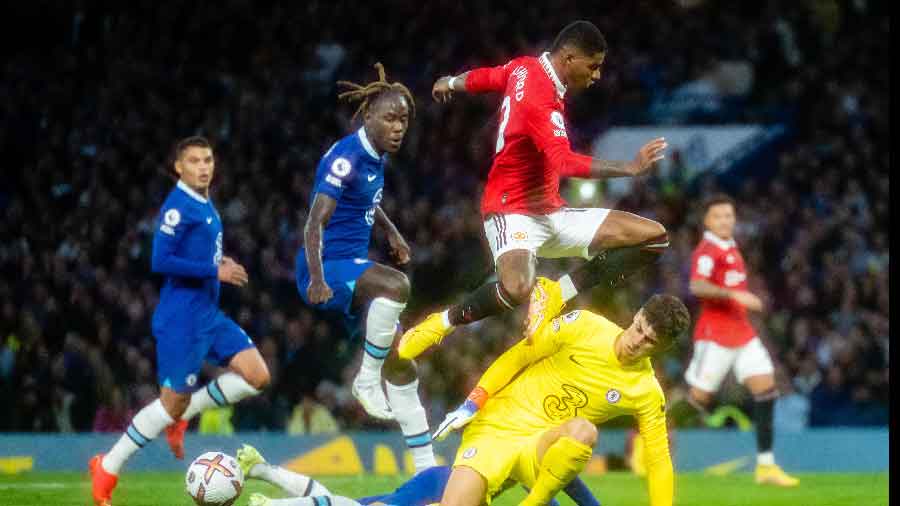 Brazilian Casemiro scored his first goal for Manchester United in the fourth minute of injury time to grab a point against Chelsea on Saturday in a lively if scrappy 1-1 Premier League draw.

The midfielder, newly signed from Real Madrid, headed the ball fiercely just wide of Kepa and the Chelsea keeper could only palm it on to the post where it just crossed the line. The two sides, battling for fourth place in the league, had been heading for a goalless draw until an 87th-minute Jorginho penalty looked to have settled the match in Chelsea's favour.

The Italy midfielder slotted calmly home after substitute Scott McTominay, defending a corner, manhandled Chelsea substitute Armando Broja to the ground. The result keeps Chelsea, who had kept five clean sheets going into the match, in fourth place, a point ahead of their rivals. United coach Erik ten Hag told the BBC: “I would have been disappointed if we had gone without a point because we didn't deserve that. At the end of a tough week to come here, you bring the point home.”

United controlled much of the early exchanges, dominating midfield and creating chances for Marcus Rashford and Antony, who forced Kepa into a fingertip save in the 13th minute and put a shot wide just before halftime with only the keeper to beat. Chelsea coach Graham Potter brought on Mateo Kovacic to reinforce the middle before the break and the change earned the home side greater possession in the second half and a series of near chances for striker Pierre-Emerick Aubameyang.

But their best opportunity before the penalty was a strike from defender Trevoh Chalobah whose 72nd-minute header hit the bar. United and France's World Cup squad will be concerned for defender Raphael Varane, who went over on his ankle midway through the second half and limped away looking distraught. ”It is difficult to say how it is now because it is so soon after the game. We have to wait 24 hours and then we will know what it is,” Ten Hag said.