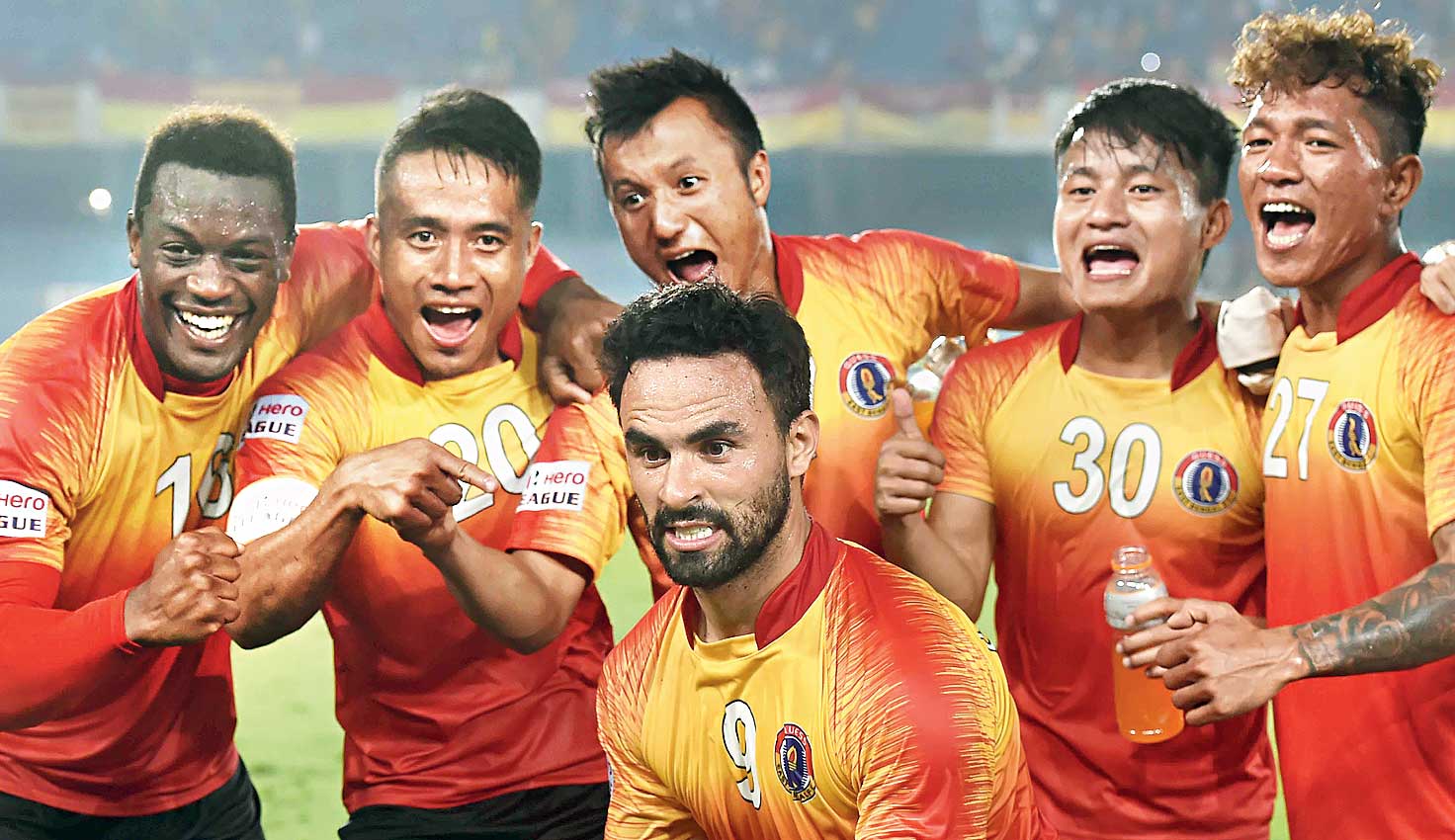 Alive and kicking… That’s what East Bengal must be thinking after their come-from-behind 2-1 victory over Neroca FC in an I-League match at the Salt Lake Stadium on Thursday.

Thursday was the first of the four matches East Bengal would be playing in 11 days. And they needed a bright beginning. But the way the match started, it seemed it would be all over Alejandro Garcia’s men.

East Bengal goalkeeper Rakshit Dagar must take blame for the goal East Bengal conceded. He bungled big time dealing with a Katsumi Yusa delivery and Lalrindika Ralte also was caught unaware. Chencho latched onto the ball and prodded it home.

East Bengal soon regrouped though and started probing the Neroca defence. Toni Dovale volleyed over; Derby hero Joby Justin’s prod, after a delightful passing game by Lalrindika, Kassim Aidara, Dovale split open the Neroca defence and found the Keralite inside the box, was just wide of the near post; another Dovale attempt went straight to Neroca goalkeeper Lalit Thapa.

East Bengal were doing everything right but could not do the most important thing — getting the equaliser.

East Bengal also had a goal disallowed in the 55th minute when Borja Perez’s brilliant header off one of the many Lalrindika corners was correctly given off-side. Two minutes later, Garcia brought in Enrique in place of Dovale and two further minutes later, Brandon Vanlalremdika replaced Laldanmawia. Those two substitutions gave more thrust to the hosts’ attack.

Enrique showed how a ‘No. 9’ can wreak havoc in the opposition ranks. With Jaime Colado dropping deep, Enrique took the centre stage making life miserable for Eduardo Ferreira and Varney Kallon. Joby also started playing wide creating more confusion in the Neroca ranks. In between Garcia made another substitution. Out went a tiring and error-prone Kamalpreet Singh and in came Samad Ali Mallick. East Bengal fans realised the significance of Garcia’s three changes later on.

In the 67th minute, came the equaliser. Colado’s centre from left and Enrqiue’s powerful header beat Thapa all ends up. It was a free header no doubt but one cannot take the credit from the Mexican for the minimum effort and maximum effect.

There were some 35,000 spectators at the ground — probably the maximum number of spectators turned up at the Salt Lake Stadium except for a Derby clash — and they started sensing a comeback. East Bengal went all out for the winner and it came four minutes before full time.

Brandon freed Samad on the right with a nice flick and the latter’s centre found Enrqiue. Central defender Kallon had no answer to that powerful header. The fans, players and the bench jumped in joy as East Bengal nosed ahead just minutes before referee R. Venkatesh blew the final whistle.

A month ago, Enrique was in Spain undergoing rehab to recover from a rib injury. And in the very second match of his comeback, he had a headline-grabbing performance. If luck had it, the Mexican would have got his name on the scoresheet against Bagan on January 27 itself.

His deft flick, in the dying minutes of that Derby, was anticipated correctly by Shilton Paul. Interestingly, Enrique had scored a brace against Neroca in Imphal. That was in October.

East Bengal now have 28 points from 14 matches and travel to Srinagar for a vital match against Real Kashmir FC.