The visitors fell apart in the second half, conceding three goals in quick succession 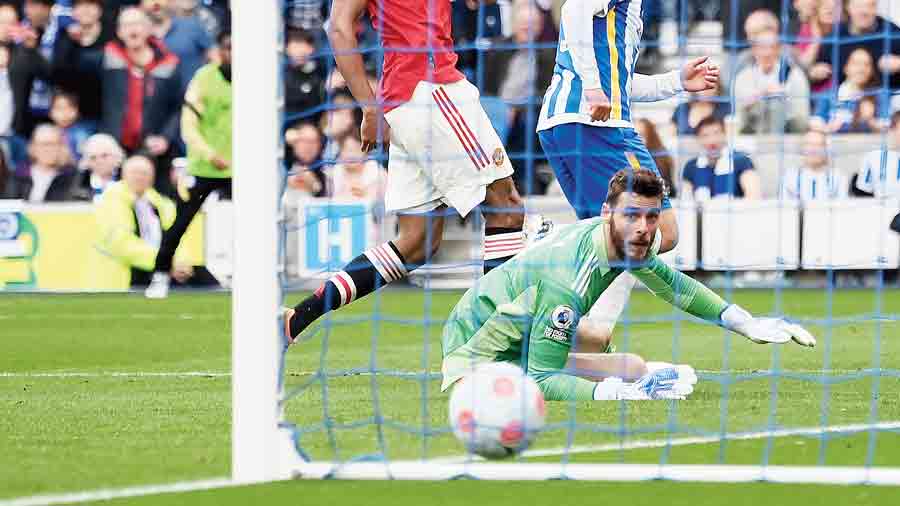 Manchester United suffered a humiliating defeat at the hands of a rampant Brighton at the Amex Stadium — a result that confirmed United would not qualify for next season’s Uefa Champions League.

Ecuador international Moises Caicedo put the hosts ahead with his first Premier League goal in only his sixth game, with a low 25-yard strike after United’s Alex Telles had failed to clear.

The visitors, in interim boss Ralf Rangnick’s penultimate game in charge before he is replaced by Erik ten Hag, fell apart in the second half, conceding three goals in quick succession.

Marc Cucurella fired into the roof of the net from Leandro Trossard’s pull-back for the second, with Trossard setting up Pascal Gross to calmly steer in a third.

The fourth goal was scored by Trossard when he bundled the ball over the line from close range, with the goal eventually given after a VAR review checked for a handball.

Conor Coady struck deep into time added on to snatch a 2-2 draw for Wolverhampton Wanderers away at Chelsea, as the Londoners’ prospective new owners looked on from the Stamford Bridge stands.

Coady headed home a cross from substitute Chiquinho in almost the last action of the game.

Wolves had trailed for much of the game after Chelsea’s out-of-form striker Romelu Lukaku scored twice in two second-half minutes.

Buendia sent Ings through on goal with a precise pass with seven minutes on the clock, and the former Burnley striker slotted home. Watford were relegated after a 1-0 defeat by Crystal Palace as Wilfried Zaha’s first-half penalty soured former manager Roy Hodgson’s return to Selhurst Park.

Palace were awarded a penalty following a VAR check for handball by Hassane Kamara and Zaha stepped up to slot home his 13th goal of the season.