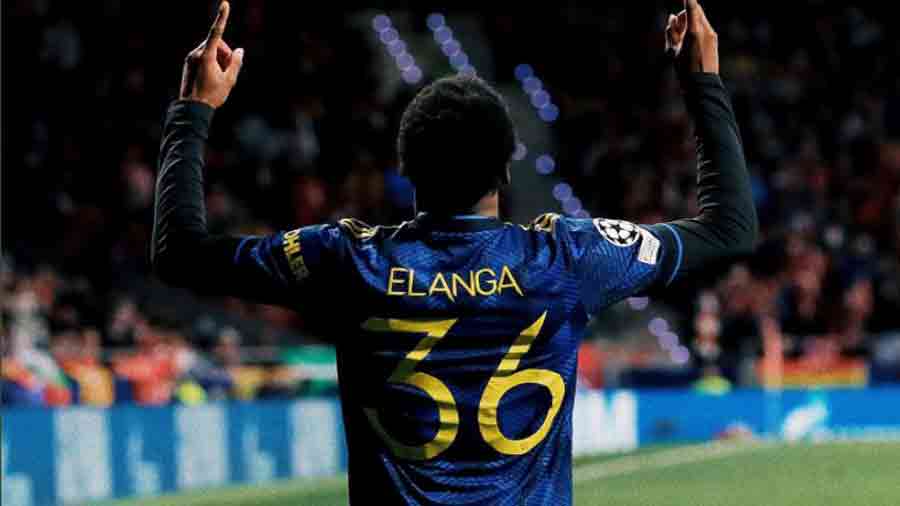 A late goal from substitute Anthony Elanga rescued a 1-1 draw for Manchester United at Atletico Madrid in their Champions League last-16 first-leg clash on Wednesday.

United, looking disjointed and lacking spark, were cornered from the start by a relentless Atleti, who opened the scoring after seven minutes with a brilliant header by Joao Felix from Renan Lodi’s cross.

Atletico had many opportunities to extend their lead and hit the post twice but were punished by a defensive mistake which gifted the ball to Bruno Fernandes 10 minutes from time.

The Portuguese playmaker found Elanga behind the defensive line and the 19-year-old striker scored with a precise cross shot, one of only two United efforts on target in the whole game. Elanga became United’s youngest scorer in the Champions League knockout stages at 19 years and 302 days.

United faced a hostile atmosphere at Metropolitano stadium as the home fans packed the sold-out venue and cheered loudly as their team make a fast start.

“Looking at the game, the way it was, we have to feel really happy with the result,” United manager Ralf Rangnick told a news conference.

“After the performance in the first half it could only get better. What we played in the first half — I still can’t believe it. We played without conviction and the necessary aggression against the ball. That’s why we were really struggling.”

Atletico suffocated United’s defence with a fierce high pressing game and dominated the ball with almost 70 per cent of possession. The Premier League side failed to register a shot on target in the first half and the hosts almost extended their lead just before half-time when Sime Vrsaljko’s header struck the crossbar.

With his team failing to break down Atleti’s compact defensive lines, Rangnick made four substitutions, replacing Paul Pogba and Marcus Rashford with Alex Telles and Elanga who came up with the equaliser.

Atletico substitute Antoine Griezmann nearly grabbed a late winner for the hosts but his shot from inside the box hit the post.

Elanga later said he had dreamed of the moment. “I’ve dreamt of moments like this, scoring in the Champions League against a top team like Atletico Madrid,” Elanga told BT Sport. “Whenever I get an opportunity for the club I just want to repay the favour from the manager. I’ve said how calm and cool I am. I just want to give 150 per cent whenever I set foot on the pitch. I always tell myself I want to be the best player on the pitch,” Elanga said.

“We didn’t play the best football in the first half, but with the substitutions we made in the second half we stepped up a bit. Manager (Rangnick) told me to just make the defenders scared and when I get an opportunity, take it.”

“I wanted a good result for the fans because they’ve travelled a long way. Hopefully, the next leg at Old Trafford will be even better,” he said.

Ajax Amsterdam admitted to mixed feelings after their drawn match, angry they did not capitalise on their chances and then allowing hosts Benfica back into the game. But the 2-2 draw hands them the advantage for the return in Amsterdam on March 15.

“The feeling is a bit mixed. We twice had the lead, but we gave away goals very easily. We were not very good on the ball today (Wednesday),” said coach Erik ten Hag, “we can play at a higher level and then you automatically have more control.

“Nevertheless, in addition to the goals, we still created many good chances, so that must be seen as positive. We had really great opportunities to close out the game.”

Ajax were 2-1 up at the break but in the second half were caught on the counter attack with too many players committed forward, which did not sit well with the coach. “You can’t let yourself be countered while you are leading 1-2. That should not happen to us, we needed to read the game situation better,” he told reporters.

Ajax’s prolific striker Sebastien Haller was again among the goals. Not only did the lanky Haller score to take his tally in this season’s competition to 11 goals in seven games, but he also contributed an own goal in a pulsating clash at the Estadio da Luz.

The Dutch club were ahead after 18 minutes through captain Dusan Tadic but an unfortunate own goal from Haller saw the scores level seven minutes later. Ajax, however, did not take long to restore their lead as Haller made amends with a close-in finish in the 29th minute.

A second-half header from substitute Roman Yaremchuk ensured a draw for the hosts and a boost to their hopes in the second leg next month.