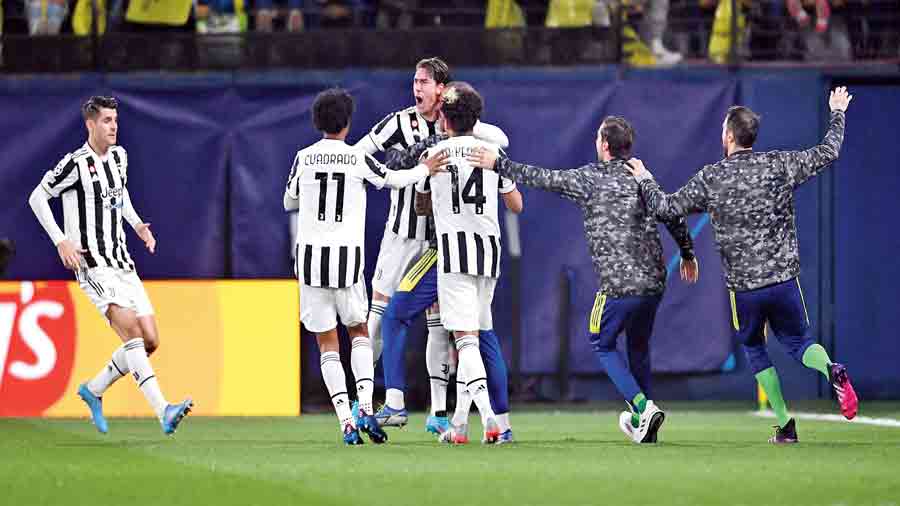 Dusan Vlahovic (centre) of Juventus with teammates after scoring against Villarreal on Tuesday.
Getty Images
Reuters   |   London   |   Published 24.02.22, 12:33 AM

Goals in each half from Kai Havertz and Christian Pulisic earned defending champions Chelsea a solid 2-0 first-leg victory over Lille in the Champions League last-16 on Tuesday, but the London side will be concerned about injuries to key players.

Germany forward Havertz, who had already had two attempts on goal early in the game, headed down a Hakim Ziyech corner in the eighth minute and the ball bounced high off the turf into the net.

Chelsea left struggling striker Romelu Lukaku on the bench and it was American Pulisic who hit the second in the 63rd minute with a curling finish after N’Golo Kante’s surging run and pinpoint pass.

The action was at times frenetic as Ligue 1 champions Lille sought to take something from the game into the second leg at home on March 16.

“They played good football and the first half was very difficult for us. Now it is half-time and the next game we have to win as well,” Havertz said.

The French side, who topped their qualifying group ahead of Salzburg, VfL Wolfsburg and Sevilla, kept Chelsea busy going forward with buzzing runs from Renato Sanches, Benjamin Andre and Jonathan Bamba.

But efforts from all three and from Canadian striker Jonathan David were either blocked, usually by defensive rock Thiago Silva, or collected easily by Edouard Mendy in the Chelsea goal.

Chelsea, who face Liverpool in the League Cup final on Sunday, may be satisfied with their two-goal lead in the tie but they will be concerned for the fitness of pivotal midfielder Mateo Kovacic and of in-form Ziyech who both limped off early in the second half.

Thomas Tuchel’s side are on an exhausting run of games with matches this month played or scheduled in five competitions. They won the Club World Cup in Abu Dhabi 10 days ago and injured trio Ben Chilwell, Reece James and Callum Hudson-Odoi paraded the trophy round Stamford Bridge before kick-o ff.

They also won games in the FA Cup and Premier League before Tuesday’s game and Sunday’s final at Wembley.

“We did not play our best football,” Havertz said. “We could not get the aggressiveness of the last few weeks but we won 2-0 and that is the most important thing. Sunday is another competition and we have to focus on that now.”

Dusan Vlahovic scored the second-fastest goal ever for a Champions League debutant as his Juventus side were held to a 1-1 draw at Villarreal in the first-leg tie. The Serbian striker, who joined the Turin side from Fiorentina in January, needed only 33 seconds to net a perfect cross shot.

Juventus dominated the game until a mistake by their defence in the 66th minute gave Dani Parejo the chance to score the equaliser.

Etienne Capoue spotted Parejo alone and unmarked behind defenders and sent a perfect pass over the top for the Spanish midfielder to tap into the net. After the goal, Villarreal had a couple of clear opportunities and could have gone ahead if their forwards had been more efficient.

“I have a bittersweet taste in my mouth, I believe we deserved more,” Capoue told reporters.