In a match like this, past records, form, and favourites’ tag do not matter, says Pritam Kotal 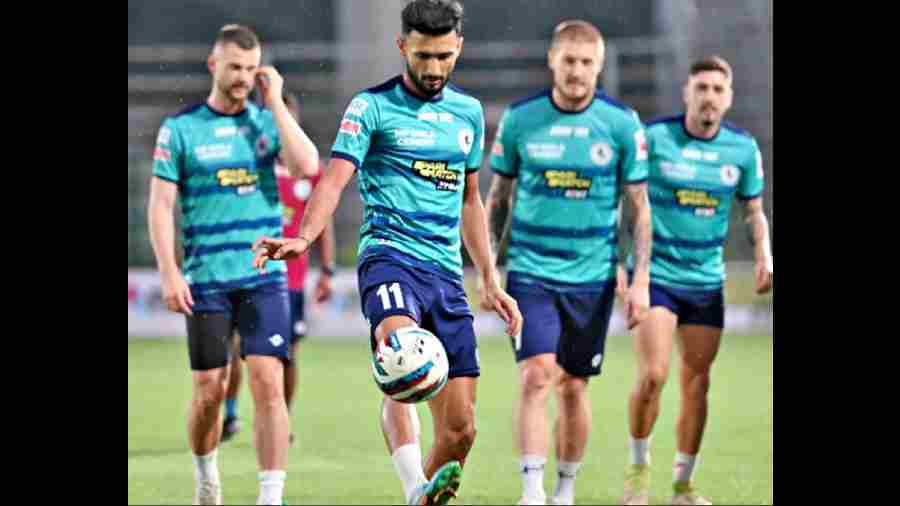 Manvir Singh of ATK Mohun Bagan juggles with a ball as (from left) Brendan Hamill, Joni Kauko and Dimitri Petratos watch during a training session at the club ground on Friday.
Picture by Santosh Ghosh
Angshuman Roy   |   Calcutta   |   Published 29.10.22, 03:30 AM

For over two-and-a-half years, ATK Mohun Bagan have made Derby clashes their very own. Bagan have won six matches against arch-rivals East Bengal since January 2020, which they played when the ATK prefix was yet to be added.  On Saturday, the two Maidan teams meet for the first time in the ongoing ISL IX Derby, at the Salt Lake Stadium, and the onus will be on red-and-gold East Bengal to buck the trend.

“In a match like this, past records, form, and favourites’ tag do not matter. It’s always fifty-fifty,” Pritam Kotal, ATK Mohun Bagan captain, said at the pre-match news conference on Friday. “There’s the question of bragging rights and pride that goes with the Derby. I am aware that we have not won for around six games. So, we are going to try and fix that on Saturday,” East Bengal coach Stephen Constantine said.

The last time they played, at the same stadium, in the Durand Cup in late August, Juan Ferrando’s men were grateful to Sumit Passi’s own goal. Yes, they could have scored a couple of more goals but that was another story.

East Bengal then were not prepared with just a fortnight of practice sessions but this time Constantine and his men seem to be more equipped. Both teams recorded away victories in their respective previous games in the ISL. ATK Mohun Bagan trumped Kerala Blasters 5-2 with Dimitri Petratos scoring a hat-trick and East Bengal beat NorthEast United FC 3-1. Ferrando was under pressure after dismal performances in the Durand Cup, AFC Cup inter-zonal semi-final, and the loss to Chennaiyin in their first match of ISL IX. The victory against Blasters should give him some breathing space. “Yes, the situation is much better,” he agreed.

Petratos, who will be playing his first Calcutta Derby, will be the marked man on Saturday. “If you are working as a team then you succeed. Football is no longer about individuals. Also if he is marked, others will find space to exploit,” Ferrando said. East Bengal will look to Cleiton Silva for the goals.  “Before the first game, we hardly got time. We are more prepared now,” the Brazilian said.