Armel Bella Kotchap is the only newcomer in the German national team’s latest squad. Lauded by Lothar Matthäus, the defender is experiencing a rapid career upswing, but for the time being he’s auditioning for the DFB 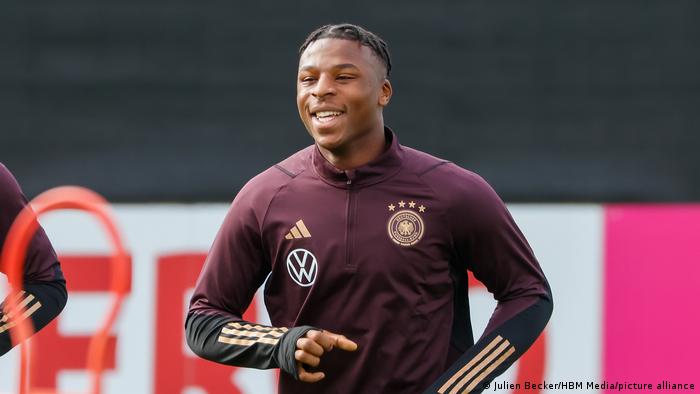 Hansi Flick was in luck. The recipient did not know his telephone number. And these days, who answers the phone when you can't see who is calling?

Armel Bella Kotchap nevertheless pressed the green answer button on his mobile phone and almost got a little fright when he heard who answered on the other end of the line.

Flick called Bella Kotchap up to the national team for the first time ahead of the final round of fixtures in the Nations League group stage as Germany face Hungary in Leipzig on Friday before taking on England on Monday.

When asked by DW for his assesment on the up-and-coming defensive talent, Flick said: "We're not planning on putting him in the starting lineup just yet, but he's made a good impression and has operated with confidence."

"His time at Southampton has served him well and his style of play is certainly good for us," continued Flick. "He loves executing his defensive duties when it comes to putting in challenges and protecting the goal. He's made a good impression, not just with the coaches, but with the players as well. This was definitely the right time, during this international break, to have a look at him."

Son of a Cameroon international

Bella Kotchap will be a familiar name to anyone who followed VfL Bochum’s return to the Bundesliga last season. There, he took his first steps among Germany’s elite and immediately established himself as a first-team regular, going on to play an integral role in Bochum avoiding relegation. His performances even caught the eye of Lothar Matthäus, who made more appearances for West Germany and Germany than any other.In his role as a pundit, Matthäus put forward Bella Kotchap as a player that Bayern Munich could look to when replacing Dortmund-bound Niklas Süle.

After only 22 Bundesliga appearances, his journey instead took him to the English Premier League as he signed for Southampton under Austrian head coach Ralph Hasenhüttl.

"If you look at his physical qualities, he fits perfectly in the Premier League. That's what we were hoping for," Hasenhüttl said.

His progress with the Saints has maintained the steep trajectory and underlines just how far the youngster has come.

The son of the former Cameroon international Cyrille Florent Bella, who himself played in Germany for 11 years, Bella Kotchap was born in Paris in December 2001. Through his father's nationality, he also has Cameroonian citizenship. After his family settled in the small town of Neuss near Düsseldorf, Bella Kotchap began working single-mindedly on his career. From a local club in Neuss, he first went to nearby Borussia Mönchengladbach, later moving to MSV Duisburg and then to Bochum. Now he has arrived on the big stage.

Building block for the 2024 European Championship

"I'm the youngest here and I still have a lot to learn," said Bella Kotchap, still a little shy upon his arrival at the DFB's team quarters in Gravenbruch on the outskirts of Frankfurt. Head coach Flick said that Bella Kotchap "has recently shown very good performances at Southampton, has developed very well. That's why we decided to have a look at him for a week."

The World Cup tournament in Qatar will probably come too soon for the debutant in waiting, but in terms of the long-term future of the center-back role, Bella Kotchap is an option to be taken seriously. Flick needs a competitive team for the European Championship in Germany in 2024 and the auditions have long since begun.

"What is also important for us is what comes after the World Cup," Flick said.

Up against the best attackers

During his time with the national team, Bella Kotchap wants to start by convincing the coaching staff with his performances in training.

"I'm playing with players here who are playing at a very high level," said the newcomer, almost somewhat bravely.

In the Premier League he has to deal with some of the best attackers in Europe week after week and Bella Kotchap certainly wants to enjoy his time with the DFB as the 20-year-old further hones his skills: "I'm proud to be here."