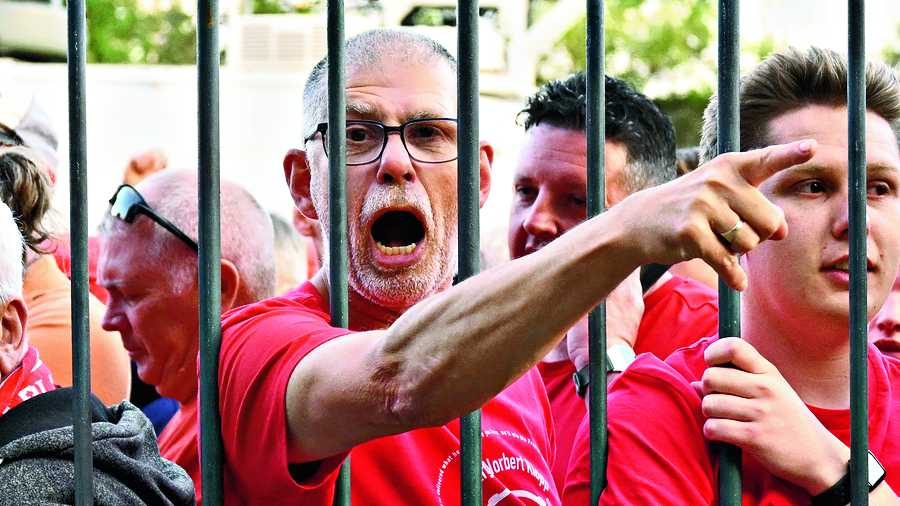 Liverpool fans outside Stade de France in Paris prior to the Uefa Champions League final between Liverpool and Real Madrid on May 28.
Getty Images
Reuters   |   Published 04.06.22, 01:40 AM

Uefa has issued an apology to the fans who were affected by the events surrounding the Champions League final after ticket fraud and crowd trouble marred the showpiece event at the Stade de France in Paris.

The match was delayed by more than 30 minutes after officers forcefully held back people trying to enter the Stade de France while riot police had also sprayed tear gas on fans, including women and children.

“Uefa wishes to sincerely apologise to all spectators who had to experience or witness frightening and distressing events in the build-up to the Uefa Champions League final... on a night which should have been a celebration of European club football,” it said in a statement on Friday.

“No football fan should be put in that situation and it must not happen again.”

Much of the blame was placed on Liverpool fans by France’s interior minister Gerald Darmanin but he acknowledged police were caught off-guard by several hundred local “delinquents” who turned up to cause trouble. Europe’s soccer governing body had commissioned an independent report earlier this week.

On Friday they outlined its scope as they look to establish a timeline of events, examine operational plans, assess roles and responsibilities and the response to events inside and outside the stadium.

“The review will engage with Uefa and all relevant stakeholders, including, but not limited to, fan groups... the finalist clubs themselves, general spectators, the French Football Federation, the police and other public national and local authorities, and the stadium operator,” it added.

Ticket holders who were blocked from entering Stade de France must be reimbursed “as fast as possible”, French President Emmanuel Macron told local media on Friday.

“I have a thought for the families who have been pushed around, who have not been able to access the seats they had paid for. This is why I hope that we can compensate them as soon as possible,” Macron said in the interview.

“I have asked the government to clarify what happened, to determine the responsibilities and to explain them in detail to our compatriots, the British and the Spanish.”

Real Madrid had earlier demanded answers from organisers over measures taken to protect supporters while Liverpool CEO Billy Hogan had reiterated a call for an investigation, saying they had written to Uefa and raised specific questions.