As the marquee tournament kicks off in Qatar, soccer mania has gripped this southern state and fan pages, largely celebrating South American nations dominating the sport, have started going viral 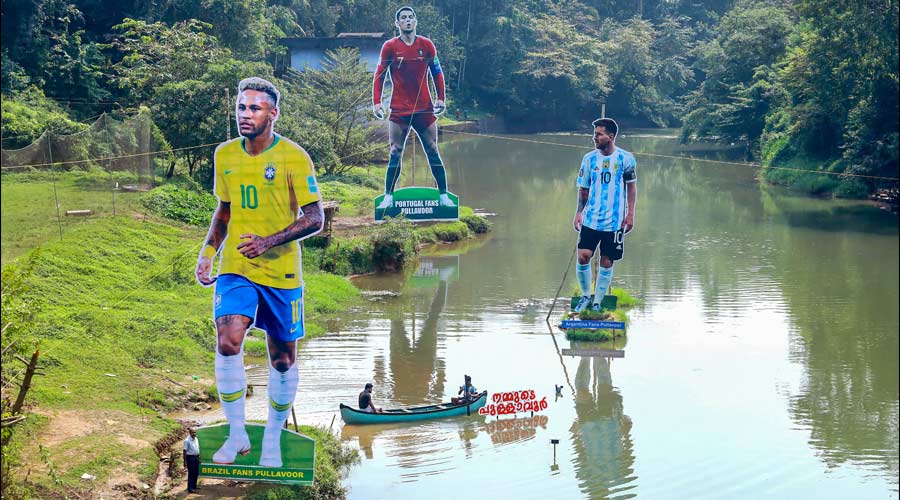 Football frenzy is peaking in 'paradoxical' Kerala ahead of the world cup as huge cutouts of Lionel Messi, Neymar Jr and Cristiano Ronaldo erected alongside a scenic river flowing through this north Kerala district have grabbed worldwide attention.

As the marquee tournament kicks off in Qatar later this month, soccer mania has gripped this southern state and fan pages, largely celebrating South American nations dominating the sport, have started going viral.

Kerala, known for its love for football, caught the global attention last week when a group of Argentinian soccer team fans in Pullavoor village erected a 30-foot-tall cutout of Messi over a small islet in the river weeks ahead of the Qatar World Cup.

If Argentina is there, can Brazil be left behind?

Keralite Brazil fans erected a 40-foot-tall cutout of Neymar Jr along the banks of the river, spicing up the contest between the supporters of the two stars.

It didn't take long for Messi and Neymar Jr to be overshadowed by yet another over 45-foot tall Cristiano Ronaldo cutout wearing Portugal jersey. The fans have used his widely shared image of him preparing for a free kick at the 2018 FIFA World Cup.

Incidentally, FIFA tweeted a picture of the cutouts, saying world cup "fever has hit Kerala."Chief Minister Pinarayi Vijayan thanked the world football body for "acknowledging our unmatched passion for the sport." Kerala's love for football is "on full display" with the World Cup around, he said in a tweet.

"These cutouts have been widely shared by the official fan pages of Argentina and Brazil," E T Nibinraj, a resident from a nearby area, told PTI.

Argentina National Football Team, an unverified Facebook page with over over 4.23 lakh Likes and followers, posted the image of Messi's cutout on November 1 which went viral.

Numerous fan pages, including that of Brazil, have shared the viral images.

According to P V Sreenijan MLA, who is also the president of District Sports Council in Ernakulam and an office bearer of the district football association, said the club football history of the country has greatly influenced the people of Kerala.

"The Mohun Bagan and East Bengal clubs along with the 1973 Santosh Trophy win among other factors attracted a whole generation towards football. Keralites are also big fans of (Deigo) Maradona, Pele. The history of Argentina and the literature on Latin American football was readily available to Keralites through books and newspapers," Sreenijan told PTI, while tracing the Malayali community's love for soccer.

A popular social media handle, @Advaidism, who is an ardent fan of Arsenal club, said the passion for football is so high in Kerala that before each FIFA world cup, half of the state supports Brazil while the other half will root for the Argentinian football team.

"Kerala is a paradoxical Indian state where football is far more popular than cricket. Kerala hosted Santosh Trophy in 1950s and won it in 1970s. Kerala enjoyed a golden age from 1985 to 1995 by making it to Santhosh Trophy finals seven times consecutively and football became an iconic sport ever since in the south Indian state," said the social media handler who did not wish to be identified by his name.

The cutout mania has its critics too. A lawyer, who claims to be an activist, filed a complaint with the Chathamangalam panchayat to remove the structures claiming they might affect the natural flow of the river.

The location borders Chathamangalam panchayat and Koduvally Municipality. The Municipal authorities claim it is part of their territory. The local body authorities said they were not planning to remove the cutouts.

Kunnamangalam MLA P T A Rahim said the game of football unites people across countries and languages and they stand with the joy of football fans.

"There is no basis in the argument that the cutouts of Messi and Neymar installed in Pullavur (sic) should be removed. The place where the cutouts were installed is on the border of Chathamangalam GP (gram panchayat) and Koduvalli municipality...part given by GoK for the drinking water system of NIT," Rahim tweeted.

He said he visited the site and it was confirmed the cutouts installed in the area adjacent to the National Institute of Technology (NIT) Calicut's check dam will not affect the natural flow of the river in any way.

Meanwhile, a tragic incident was reported from Kannur on November 5 when a 48-year-old man, a diehard fan of Brazil who was attempting to tie a poster up a tree, died after falling from it.

In 2021, when Argentina lifted the Copa America cup, the streets of Kerala were as charged as any Latin American street.

ESPN Argentina had then shared a video of Argentina fans in Kerala riding through the streets in joy.

Kerala is also witnessing a friendly banter between the enthusiastic legislators cutting across political lines over two favourite teams, Brazil and Argentina.

The now customary social media fight of leaders started this time with State Education Minister, V Sivankutty cheering Brazil with a poster saying the football giant will lift this edition of the World cup.

Senior Left leader and former state minister M M Mani, an Argentina fan, responded sarcastically by commenting that he hopes that Brazil will not catch the first return flight from Qatar.