Luka Majcen scored a brace, Rishad Puthanveettil and Jithin Subran netted a goal each for the winning side 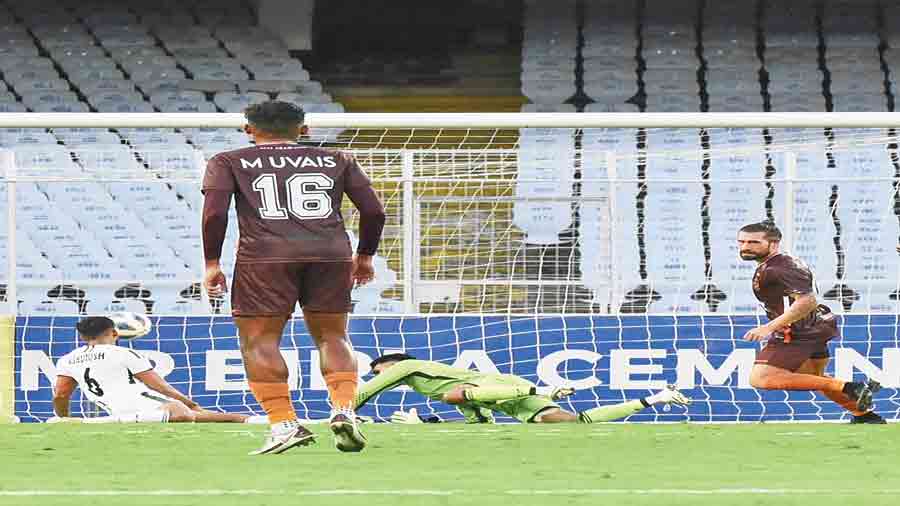 “You all have seen the game. Have you seen any difference between the I-league and ISL sides? I am disappointed that the national team has no players from I-league. The federation must understand that there is no difference. ATK Mohun Bagan is a very important club and they are very experienced. Right now, we represent India. We are very proud of our performance,” the Italian said at the post match media conference.

ATK Mohun Bagan didn’t start the match as badly as the result suggested. Within 20 minutes of the game, star striker Roy Krishna could have scored twice had he not miss easy chances. ATK Bagan got a few other chances as well, but those were also wasted.

Till the 37th minute, it was all-good for ATK Mohun Bagan. But central defender Tiri’s injury came as a nightmare for the Juan Ferrando-coached side.

The Spaniard was stretchered off the ground and Ashutosh Mehta replaced him and thereafter the dimension of the game changed.

The compactness of the back line went away, there was lack of coordination between the defence and midfield. It seemed no other player can filled Tiri’s void.

After the change of ends, the floodgates opened and Luka drew first blood. The unmarked striker poked home a Thahir Zaman’s cross to give Gokulam Kerala 1-0 lead. But within three minutes, Pritam scored the equaliser from Liston Colaco’s corner kick. But Gokulam Kerala didn’t have to wait long to get their second goal. Unmarked Jourdaine Fletcher gave a pass to Rishad who slotted the ball home calmly to make it 2-1.

Gokulam Kerala extended their lead to 3-1 through Luka eight minutes later, with the striker exposing ATK Mohun Bagan’s defensive lapses as he scored his second goal of the day.

Colaco gave ATK Bagan a fighting chance as he curled in a superb free-kick to make it 3-2 with 10 minutes remaining, but Jithin scored Gokulam Kerala’s fourth goal and ended all ATK Mohun Bagan’s hopes.

Ferrando has little time in hand to rectify the mistakes his players have made on Wednesday. ATK Mohun Bagan next take on Bashundhara Kings on Saturday and if they fail to do well against the Bangladesh club side, their change of progressing to the next round would be all but over.