Flexibility armour for champion on grass 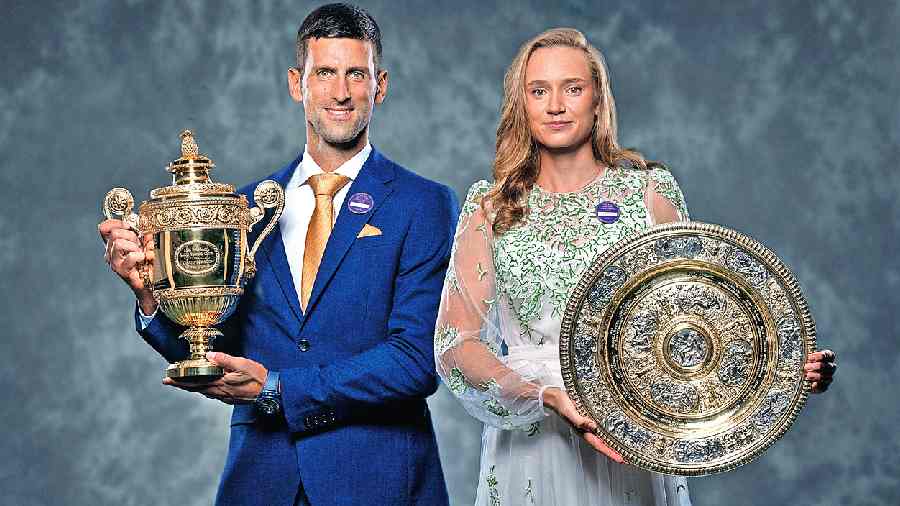 He is an elastic man, Novak Djokovic.

As he and Nick Kyrgios prepared to walk onto Centre Court for their Wimbledon men’s singles final on Sunday, Kyrgios paced in tight circles in the clubhouse. Djokovic stood a few paces behind him and stretched, just as he has since his early years in preparation for the challenges to come.

I made it to Belgrade, Serbia, once to speak with his childhood coach Jelena Gencic, the silken-voiced mentor with the pale blue eyes that discovered him on a remote hardcourt in the Serbian mountains when he was just 6 and taught him about much more than forehands and backhands.

They listened to classical music and discussed literature, all with an eye on the person and player he would become far down the road, when the courts would not have cracks running through them and Nato bombs would no longer interrupt their practice sessions.

Developing and preserving his flexibility was a part of her regimen and her vision.

“That’s the heaviest thing he had to handle when he was young,” she said in 2010, holding up a tennis racket. “We worked only on the legs, only quickness.”

Gencic, who died in 2013, was pleased during our interview with the results of her master plan, and she would have been prouder on Sunday to see Djokovic, now 35 and the father of two young children, still lunging and twisting like an acrobat into the corners of the court to deal with Kyrgios’s haymakers.

As he proved once more over the course of three hours and his 4-6, 6-3, 6-4, 7-6 (7-3) victory, Djokovic can absorb pace like perhaps no man in tennis history. And he can clearly absorb adversity, as well, even when it is much of his own making.

A year ago at Wimbledon, he was flying particularly high, defusing another taller, bigger server in Matteo Berrettini to win the third leg of the grand slam and extend his winning streak at the All England Club.

But he would fall short of completing the grand slam at the US Open and then become a magnet for international debate and plenty of opprobrium by declining to be vaccinated against Covid-19, a decision that led to his detention after he arrived in Melbourne in January to play in the Australian Open.

When his appeals failed, he was deported on the eve of 2022’s first grand slam tournament. When he returned to action briefly in Dubai in late February, he said it was uncomfortable to deal with the looks of disapproval from those who had watched what had unfolded in Australia from afar.

As the tour continued in March, he was unable to enter the United States, because of his unvaccinated status, to compete in the Masters 1000 events in Indian Wells, California, and Miami Gardens, Florida. Back in action, he struggled in the early events on clay before winning in Rome and then failed to hit the high notes required in his quarter final loss at the French Open to Rafael Nadal, his long-time rival.

“Certainly, this year has not been the same like the last years,” Djokovic said. “It has started the way it has started, and it has affected me definitely in the first several months of the year. I was not feeling great generally. I mean mentally, emotionally, I was not at a good place.

“I wanted to play, but at the same time when I went out on the court in Dubai, which was the first tournament of the year, I just felt so much pressure and emotions happening. I wasn’t feeling myself on the court. I realised at that point that it’s going to take some time, that I have to be patient and that sooner or later I will get myself in the state, the optimal state, where I would like to be.”

Wimbledon, once again, turned out to be the tonic. It was where he regained his mojo when he broke out of the biggest slump of his career to win in 2018. And though he continues to play precious little grass-court tennis, skipping all the official lead-in tournaments on the surface, he was once again able to find his footing and range in a hurry to win his 21st major singles title, one behind Nadal’s record.

Goran Ivanisevic, Djokovic’s coach and a former Gencic student and Wimbledon champion, was with Djokovic in Australia though he was never detained himself.

“This was a huge thing that happened to him,” Ivanisevic said, explaining that though many expected him to return to the practice court right after the deportation, “it’s not happening like this.”

“For some people, they don’t recover,” he said. “They will never play tennis. This was a big shock. Was a shock for me, and I was there. I was free. Imagine for him.”

But stubbornness, one of Djokovic’s traits, can cut both ways, keeping him on paths of greater resistance even when better options might be available, but also providing the kind of strength of mind and purpose required to, say, save two match points and prevail against Roger Federer in the 2019 Wimbledon final.

“People like him you don’t doubt,” Ivanisevic said. “They say maybe it took him a long time, but it didn’t take him a long time. Took him the exact time that he needed to recover and to digest all the things what happened to him.”

This was hardly Djokovic’s most dominant Wimbledon. He was pushed to five sets by Jannik Sinner in the quarter finals and to four sets by four other opponents, including Kyrgios.

But he was never in genuine danger of elimination, and with seven Wimbledon singles titles, including four in a row, he now belongs in the same paragraph on grass as his boyhood idol Pete Sampras, who also won seven times at the All England Club, and his long-time rival Federer, who, for now, holds the men’s record all alone with eight.

“There are very few players who I think even have a chance to beat Novak on grass, whereas on a hardcourt there are quite a few guys. He’s still obviously great on a hardcourt, but it just seems like over the last five, six years he’s just that much better on grass. It’s the fact that he covers the court so well. You have to play so big so often to get it past him because of his skills and how the court has changed.”

The bounces at Wimbledon are slightly higher and more consistent now even if there are still bad breaks when balls skid off the patches where grass has given way to dirt. But Djokovic, so quick and reactive and so bent on staying low, can adjust and improvise.

Sampras was the first player Djokovic remembers watching on television, and one of Sampras’s early victories at Wimbledon was the reason Djokovic asked his parents for a tennis racquet and was in a position to meet Gencic and the moment at age 6.

“It always has been and will be the most special tournament in my heart, the one that motivated me and inspired me to start playing tennis in a little mountain resort in Serbia,” he said to the Centre Court crowd Sunday. “My first image of tennis was grass.”

And yet he is hardly a traditional grass-court player in the Sampras mould. He served and volleyed just 27 times in the tournament this year.

But he is not simply a new-age baseline camper, either. He came to the net 212 times and won a hefty 73 per cent of those points, often showing off the deft touch that was missing in his early years as he produced drop volley winners under off-balance duress.

He is a hard man to pass in any part of the court, even if his sliding open-stance backhand from the backcourt out of a near split remains his signature shot.

It is the stroke that he and Gencic were striving for all those years ago, and it fits the great champion he has become: dangerous under duress and resilient enough to turn even a compromised situation into a winner.

He bends but does not break, Djokovic, unless we’re talking about another man’s serve.