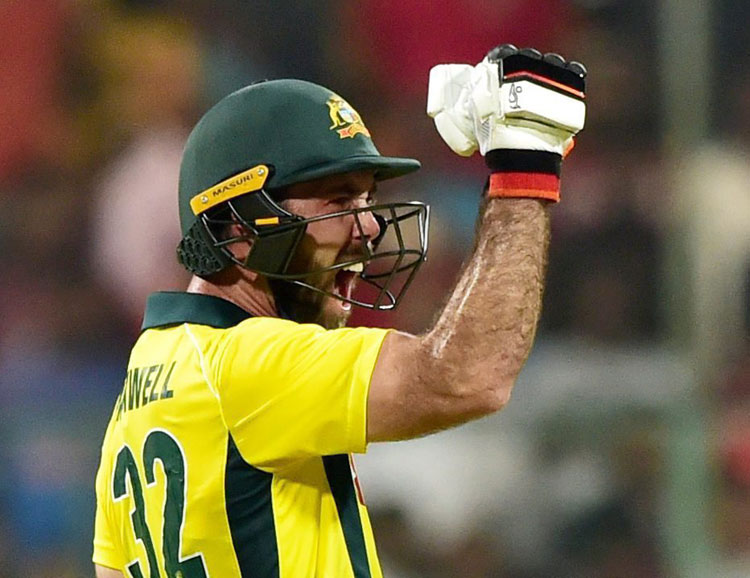 Glen Maxwell celebrates after playing the winning shot against India during the 2nd T20 match between India and Australia at Chinnaswamy Stadium in Bangalore on Wednesday
(PTI)
Our Bureau   |   Calcutta   |   Published 27.02.19, 09:50 PM

Starring in both matches for his team and rightly adjudged the Man of the Series, Glenn Maxwell hailed Australia’s T20I triumph against India.

“It feels really good. We haven’t had a lot of success in India of late. So, to come over here and perform like we have has started it off well for us on this tour. For sure, it has been a great start to the tour for us,” Maxwell said at the post-match presentation ceremony after hitting an unbeaten 113, at the Chinnaswamy on Wednesday.

Elaborating on his brilliant knock, Maxwell added: “It helps having come off a big bulk of T20 cricket in the domestic tournament back home.

“Having confidence in my game also has helped a lot and it feels great to contribute to two special wins. It was a pretty good wicket and we could afford to wait for the loose balls.

“We knew that it could be easier against the quicks, as we fancied to chase down anything around 12 runs per over. After D’Arcy (Short)’s dismissal, it was up to me to drive the rest of the innings.

“(Peter) Handscomb did a great job in giving me the strike all the time. We had a lot of chaos in the last game, but we corrected that here.”

Captain Aaron Finch too was elated after the series victory. And no wonder he was all praise for Maxwell. According to Finch, Adam Zampa’s economical bowling too made some kind of difference in the game.

“Any kind of series win against India in India is truly special. Maxwell was truly sensational, but I think Adam Zampa was also a difference between the two sides. To go for just 23 runs (in four overs) on that kind of a wicket was really remarkable bowling,” Finch said.

The skipper believes his team will be peaking at the right time before the World Cup gets underway. “We’ve been on a journey for the last 10-11 months building up to the World Cup, and there has been some pain during the journey.”