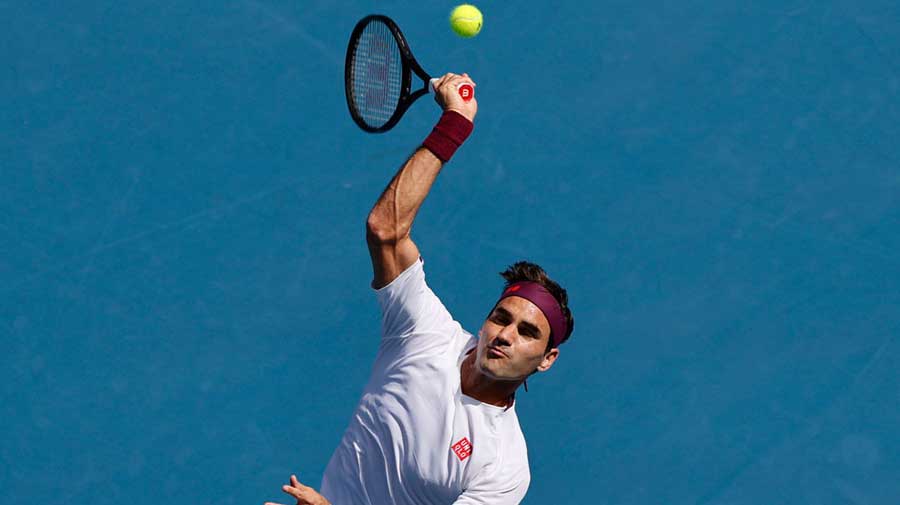 Federer is plotting a return in late February and the current men’s calendar would suggest that the ATP 500 event in Rotterdam from March 1 could be the first stop in 2021 for the world number five.
File picture
Reuters   |   London   |   Published 04.01.21, 02:39 AM

Roger Federer’s results in 2021 are more likely than any age milestone to determine when his glittering career comes to an end, said Australian Todd Woodbridge, who thinks the Swiss master may yet have another Wimbledon triumph in him.

Last week the holder of 20 Grand Slam singles titles confirmed that fitness issues after two knee operations in 2020 mean that fans will not see him in action at the Australian Open in February for the first time in more than two decades.

“A player of his stature, at some point when you’re not winning, you start to wonder about why you’re only making the quarter finals, when you’re used to being in the final,” Woodbridge told Channel Nine this week.

“It doesn’t give the same adrenaline rush as it always has, and that’s when you start to think to yourself that you’ve got other things to do with your life.”

Woodbridge, who won 22 Grand Slam doubles titles, added: “For Roger to continue on, he’ll have to be able to manage his body when he does come back. His goals, I assume, would be to play at the Olympics and at Wimbledon. Wimbledon is the major that I see him being able to win at this stage of his career.”

A semi-final defeat in Melbourne in 2020 was Federer’s last competitive match, and playing five-setters in the Australian summer heat after a lengthy injury and 14 days quarantine would have been a tricky proposition for the 39-year-old.

Federer has not missed a trip to Melbourne Park since a loss in qualifying in 1999.

Yves Allegero, Federer’s fellow Swiss and former doubles partner, feels skipping the Australian Open was a logical decision. “All his career, Roger Federer only lined up if he was 100 per cent physically,” Allegro told the 20min website. “So he made the right decision, especially since he has plenty of time left to prepare for his main goals of Wimbledon and the Olympics.”

Participating at a fifth Olympics featured prominently in Federer’s agenda, and the postponement of the Tokyo Games by a year due to the Covid-19 pandemic worked perfectly for the Swiss, who would otherwise have missed it due to injury.

The last of his major titles might have come on the Melbourne hardcourts in 2018, but Federer may see Wimbledon’s grasscourts, where he has won eight titles and made the final in 2019, as the most realistic surface to add to his tally.

Federer is plotting a return in late February and the current men’s calendar would suggest that the ATP 500 event in Rotterdam from March 1 could be the first stop in 2021 for the world number five.

The Swiss proved that he can quickly get back into his groove when he won the 2017 Australian Open despite missing the second half of 2016 season because of knee surgery.