With the next few weeks set to be loaded with the best of European football, Priyam Marik presents the biggest talking points that will define the destiny of the UEFA European Championship 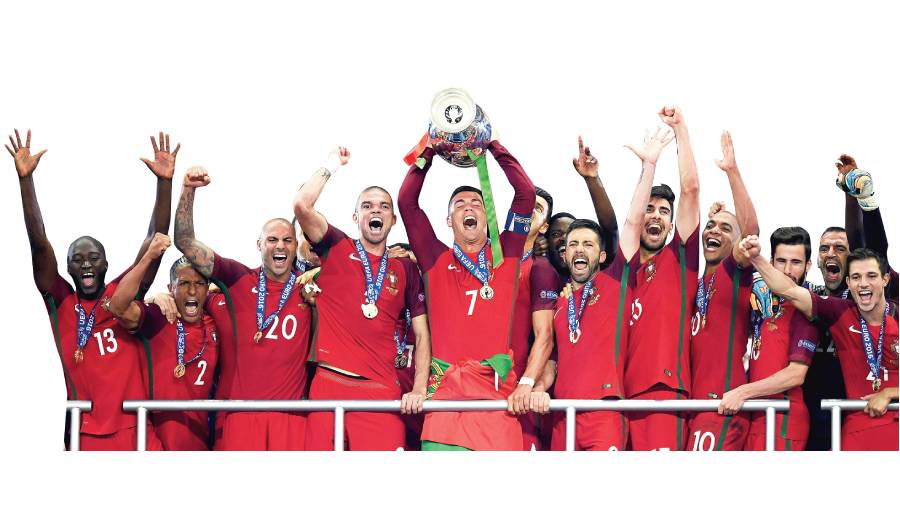 The long wait has ended. Five years after dazzling one and all in France for an enthralling month in 2016, the Euro is back. Originally scheduled to take place in the summer of 2020, the UEFA European Championship had to be postponed last year owing to the severity of the Covid-19 pandemic. But in the middle of 2021, as the coronavirus is somewhat under control in Europe, the continent’s signature footballing carnival is finally under way, with Italy and Turkey playing out the inaugural match in Rome on June 11.

As fans across the world brace themselves for a jam-packed festival of football, here’s a look at the burning issues that will play a pivotal role at this year’s Euro.

When Portugal had clinched their first major footballing trophy on a balmy evening in Saint-Denis in 2016, it was widely seen as an upset, even for a team that had a certain Cristiano Ronaldo in their ranks. Four years later, expectations have skyrocketed from the Selecao as they seek to defend their European title and add it to the trophy cabinet that also includes the debut edition of the UEFA Nations League, which Portugal claimed in 2019. Drawn in the group of death alongside Germany and world champions France, Ronaldo and Co. must make a quick start to the tournament or face the prospect of missing the knockouts altogether. With a revitalised Pepe joining the prodigious Ruben Dias at the heart of the defence and the likes of Bruno Fernandes, Bernardo Silva, Diogo Jota, and Joao Felix combining with Ronaldo in attack, this is (on paper at least) the most formidable Portuguese team of this century, but one that is yet to cope with the burden of being anointed favourites.

For more than a decade, German head coach Joachim Low has done things on his own terms. Two semi-finals and a World Cup victory in four major tournaments make for an enviable track record, but the recent slump in the form of the usually impeccable Germany had raised question marks over how motivated Low still is in the job. The speculation ended with Low announcing that the Euro would be his swansong for the Die Mannschaft, a last chance to claim the European prize that slipped away from his grasp in 2012 and 2016, both at the penultimate hurdle. Having recalled veterans like Jerome Boateng and Thomas Muller to the fold, Low has put his faith in the tried and tested for what will be his final shot at cementing a legacy that is in considerable danger of being tarnished.

Spanish coach Luis Enrique grabbed the headlines by not including captain and talismanic defender Sergio Ramos for Spain’s bid to win a third Euro in four attempts. As the most capped Spanish international of all time and an irreplaceable part of Spain’s most decorated generation, Ramos’s absence leaves a gaping hole in central defence besides depriving La Roja of an inspirational leader. As always, Spain’s gluttony of talent in attacking midfield positions remains their foremost strength, but should Enrique’s troops come under the cosh, it will be fascinating to see who steps up in Ramos’s stead to steer the team over the finish line. To further underline the inexperience in the Spanish setup, only two members of the group were around the last time Spain won an international trophy — the Barcelona duo of Sergio Busquets and Jordi Alba.

4. CAN ENGLAND’S YOUTH BRIGADE FIRE THEM TO GLORY?

A false sense of pre-tournament optimism has plagued England for decades, but only the hardline skeptics would argue that their 2021 unit does not generate hope for glory. Stacked with young, enterprising midfielders, from the elusive Phil Foden to the dynamic Mason Mount to the belligerent Jude Bellingham, manager Gareth Southgate should have a headache of plenty when it comes to selecting his starting line-up. Up front, Jadon Sancho, Raheem Sterling and Marcus Rashford bring trickery and pace and should serve up ample opportunities for captain and finisher-in-chief Harry Kane, who is among the frontrunners for the tournament’s Golden Boot. With the Euro set to culminate in London, where England won their first and only World Cup till date, English fans could be forgiven for thinking that there is a providential promise waiting to be realised this year, one that would rely on the maturity of youth to do what more experienced squads have failed to attain in the past.

After the unthinkable happened with Italy missing the World Cup in 2018, the Azzurri have regrouped under the enigmatic Roberto Mancini to emerge as credible contenders in 2021. A near flawless qualifying campaign has seen the Italians play with fervour and vigour, creating chances aplenty in the final third. In other words, not the classical Italian style by any stretch of the imagination! With a harmonious blend of veterans and starlets, Italy enter the Euro on a surge of momentum, but will meet with a dicey group that has Turkey and 2016 semi-finalists Wales. Although abundantly equipped in defence and midfield, a potential obstacle for an Italian Renaissance could be the current lack of an in-form striker, with leading act Ciro Immobile still unable to transfer his club consistency to the colours of the national team.

Having huffed and puffed with possibilities since 2014, Belgium are gradually running out of time to stamp their place in history. Despite being ranked as the world’s best team for months, there is a feeling that the Belgians will bottle it when confronted with the latter stages of a major tournament, a thought that must be on the mind of manager Roberto Martinez, who has carefully balanced idealism and pragmatism in nurturing his players. With a strong spine featuring some of the most gifted players on the planet — Thibaut Courtois in goal, Kevin De Bruyne in midfield, and Eden Hazard and Romelu Lukaku up front — Belgium will not lose any ground at the Euro for a shortage of resources; for them, it is the psychological edge that must be obtained at all costs. Defeating Brazil in Russia three years ago seemed to be a turning point for a country frequently daunted by the big stage, but should more such outcomes materialise in 2021, there will be no stopping the Red Devils en route to a first major title and the fondest Belgian memories since a captivating semi-final run in the 1986 Mexico World Cup.

7. WILL A NEW ERA DAWN FOR THE NETHERLANDS?

Since their semi-final exit in the 2014 World Cup, the Netherlands have endured a torrid time, missing out on Euro 2016 and the 2018 World Cup altogether. However, making it to the finals of the UEFA Nations League in 2019 has catalysed the impression that a new era is on the verge of dawning for the Dutch. The presence of Matthijs de Ligt in defence and midfield general Frenkie de Jong, seen to be cornerstones for the future, is fuelling the narrative that the Dutch are on the cusp of great things. The hot streak that inside forward Memphis Depay has been on since the start of 2021 should further galvanise a squad that is seeking to make the transition from reluctant pretenders to genuine challengers this summer.

8. WILL MULTIPLE HOST CITIES BE UEFA’S STROKE OF GENIUS?

The opening ceremony of the Euro at the Olympic Stadium, Rome. The final match of the championship will be played at Wembley Stadium, UK

In the midst of the pandemic, having a panoply of cities play hosts to the Euros for the first time ever initially seemed like administrative suicide, the sort that could have damaged the competition financially as well as from a moral standpoint. But given how seamlessly the club seasons have panned out, UEFA’s decision to share the scheduling load among nations could yet turn out to be a masterstroke, and not just in terms of novelty. For more than a year, football fans in Europe have been denied the chance to watch games in-person, but UEFA’s collective hosting call now offers thousands of such spectators a golden opportunity to witness live action in stadiums for one of the most anticipated competitions in history. Only time will tell if UEFA’s logistical gamble pays off, but for now, all signs point towards success.

9. WHICH UNDERDOG WILL GRAB THE LIMELIGHT?

The law of averages dictates that there shall be at least one team that outperforms its theoretical capabilities en route to creating moments of a lifetime in a tournament of the size and scale of the Euro. For 2021, this law could extend to a bunch of countries, though it is safe to rule out World Cup runners-up Croatia, whose stock has gone up significantly since their Herculean efforts three years ago. Defensively solid and brimming with creativity in the final third, Turkey are a team to watch out for, as are Russia, still buoyant after their spectacular run to the last eight in their home World Cup. Ukraine and Sweden both have adequate experience and tournament pedigree, while Poland, no longer overly reliant on sharpshooter Robert Lewandowski, should also fancy their chances of upsetting the European apple cart.

The Telegraph brings you the most important facts and figures from the history of the European Championship:

1Only once in the history of the Euros have two brothers played in the same match but on opposite sides. In June 2016, Taulant Xhaka (representing Albania) and Granit Xhaka (representing Switzerland) went toe-to-toe in France to create this peculiarly historic occasion.

5Italy have been involved in more penalty shootouts in the European Championship than any other team, with five spot-kick finishes, the latest of which ended in defeat against Germany at Euro 2016.

9 The most goals scored in Euros history, a record held jointly by French legend Michel Platini and Portuguese superstar Cristiano Ronaldo. Not only can Ronaldo become the outright owner of this record this year, but he can also cement his status as the most prolific goalscorer in all of international football should he score six more goals and match Iran forward Ali Daei’s tally of 109 strikes.

9The most clean sheets registered by a goalkeeper in the competition’s history, a distinction that belongs to Spain’s Iker Casillas, who lifted the trophy in successive editions as skipper in 2008 and 2012.