Ethiopians defend their titles at Delhi half marathon 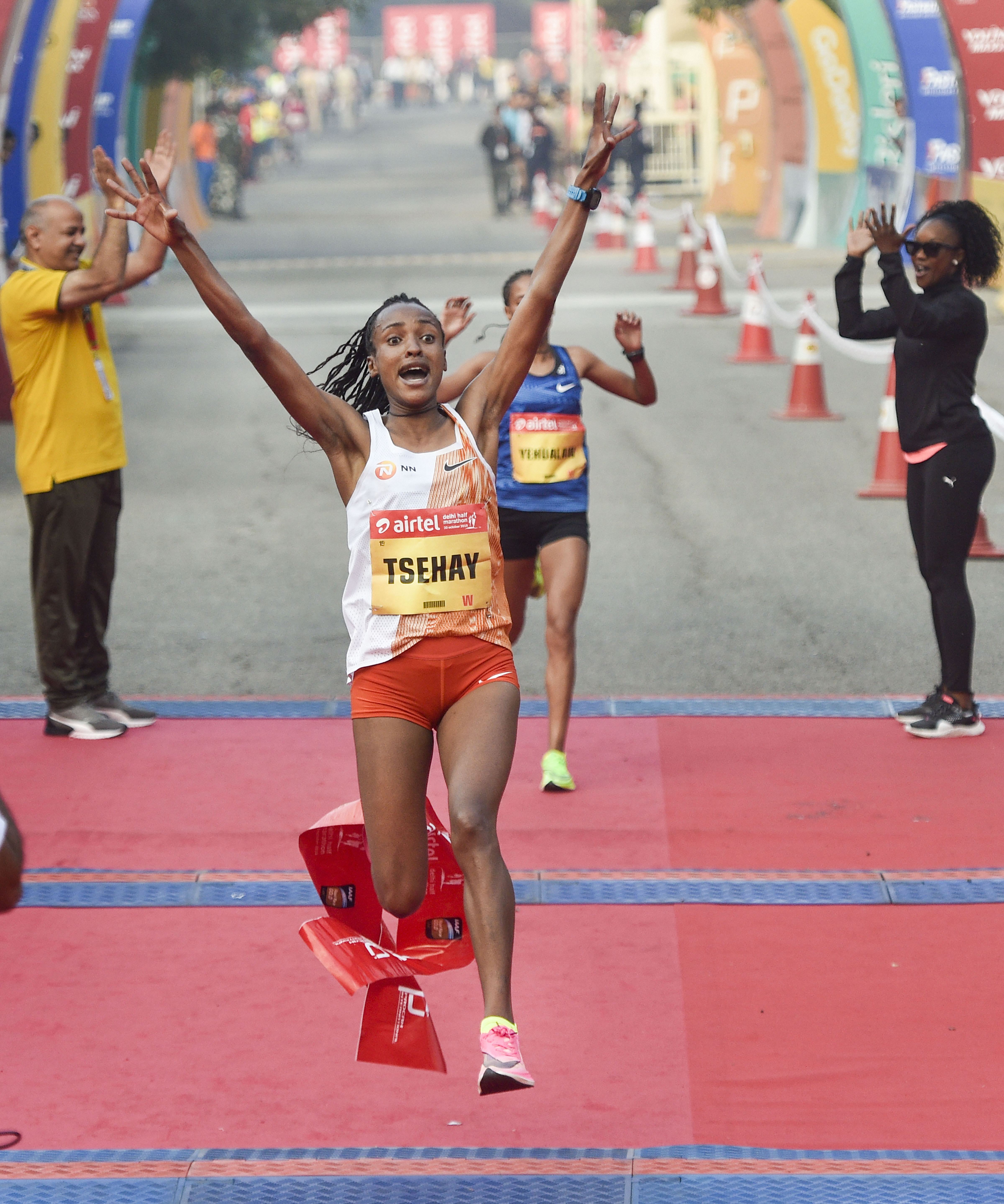 Defending champions Andamlak Belihu and Tsehay Gemechu produced their personal best to retain the men's and women's titles respectively at the 15th Airtel Delhi Half Marathon here on Sunday.

Gemechu, on the other hand, smashed the course record by producing a personal best of 66:00.

Belihu finished ahead of compatriot Solomon Berihu, who came up with a time of 59:17 on debut, while Kenya's Kibiwott Kandie signed off third with a timing of 59:33.

Belihu and Berihu had a thrilling head-to-head battle over the final few kilometres.

At 18 km, Belihu looked in trouble for several minutes but recovered his poise and reeled in his rival with little more than a kilometre remaining before pulling away for victory.

'At about 18km I started to suffer some back pain, that possibly cost me the course record. I'm a bit disappointed that I missed out on the course record again but I got a personal best so I cannot complain too much,' said Belihu.

'This race has put the frustration of finishing fifth at the world championships (in the 10,000m in Doha two weeks ago) behind me,' added the 20-year-old, who wants to come back in 2020 to attack the course record and try to become the first to win a hat trick of ADHM title.

Ethiopia also dominated the women's race with their long-distance runners grabbing the top three spots at the prestigious IAAF Gold Label Race here. The 21-year-old Gemechu not only pocketed a cheque of US $27,000 for the top position but also grabbed a course record bonus of $10,000.

Yelamzerf Yehualaw (66:01) finished just one second behind Gemechu for the second place, while Zeineba Yimer clocked 66:57 to take the third spot, the same position as she had finished in 2018.

Gemechu, who had scored a personal best of 66:50 to set a course record last year, said: 'I broke the course record and I am happy that I could achieve it. I was tired after Doha. But I wanted to come here and fight for the course record. I knew I was mentally strong.'

It was a thrilling head-to-head duel over the final five kilometres between Gemechu and Yehualaw that kept the crowd excited.

A large pack went through 5km in 15:43 before a sharp increase in pace by the male pacemakers brought the leading group of six past 10km in 31:22, indicating that the course record was very much under threat.

One-by-one runners became detached until only Gemechu and Yehualaw remained as they went through 15km in 47:05.

Coming into the final kilometre, Yehualaw who won the African Games half marathon title in August edged in front and briefly looked like she was going to cause an upset.

But with the finish line approaching Gemechu managed to get past her rival to become just the second woman to defend in Delhi.

Among Indian men, Srinu Bugatha claimed the first position with a timing of 1:4:33, while Suresh Patel and Harshad Mhatre bagged the second and third place with timings of 1:04:57 and 1:05:12 respectively.

Sports minister Kiren Rijiju flagged off the race in the presence of International Event Ambassador Carmelita Jeter and others.

'It is a very exciting moment for all of us to see that Delhi Marathon has grown so big. Over the years, Delhi Half Marathon has been peaking up and 40,000 people running on the streets of Delhi early morning,' Rijiju told reporters.

'We Indians are also now coming up and have seen today's marathon, some of our Indian marathon runners are absolutely running shoulder-to-shoulder with the international runners. Of course, I'm more excited to see the old, specially-abled, and kids also.'

Runners, improve both endurance and speed

The art of running