The 126-run target wasn’t even competitive, given the strength of this English batting line-up as well as its explosiveness when it comes to limited-overs cricket 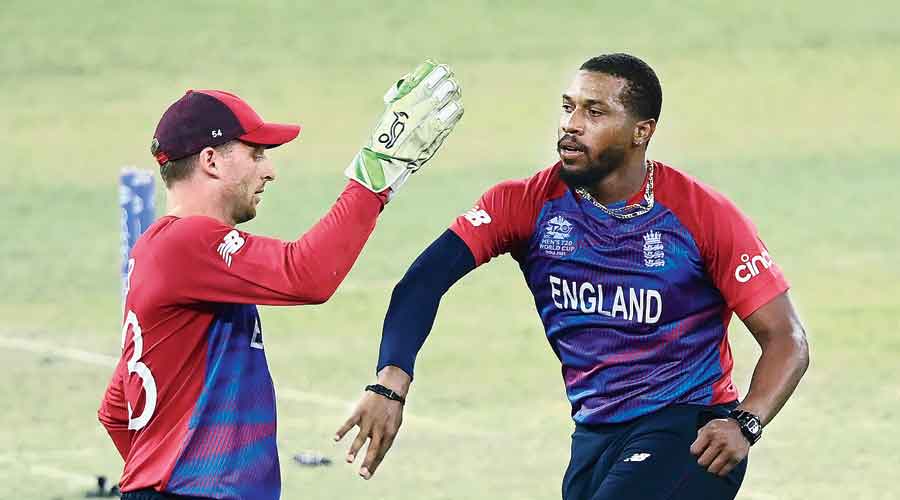 A hammering of the highest order. That’s what a ruthless England handed Australia in Saturday’s Super 12 Group I clash at the Dubai International Stadium.

Both with the ball and the bat, Eoin Morgan’s men simply outplayed the Australians who were under the cosh throughout the game. Winning the toss and opting to bowl, England bundled their arch-rivals out for a paltry 125 and thereafter courtesy Jos Buttler’s (71 not out off 32 balls) brilliant stroke-making, they cantered home with eight wickets in hand and as many as 50 balls remaining.

The 126-run target wasn’t even competitive, given the strength of this English batting line-up as well as its explosiveness when it comes to limited-overs cricket. But the manner in which they destroyed Australia’s bowling attack could have a destabilising effect on Aaron Finch and Co. who have now slipped to third in the group.

With their net run-rate having taken a severe beating, Australia find themselves below second-placed South Africa. For England, things seem to be falling into place really well as they moved a step closer to the semi-finals of this T20 World Cup with their third win on the trot.

That England could thump Australia ahead of the coming Ashes, though it’s a completely different format altogether, also bodes well for them as some of these cricketers will be in action Down Under.

Chris Woakes (2/23) and Chris Jordan (3/17) were the architects behind an unchanged England restricting the Aussies to a below-par total, which too wouldn’t have been possible if not for the late blows from Ashton Agar (replacing Mitchell Marsh), Pat Cummins and Mitchell Starc.

Woakes showed that he doesn’t always need English conditions to strike, as the length he bowled on a pretty decent surface for strokeplay was good enough to rattle the rival batsmen. The celebrations over David Warner regaining touch were maybe a little too early, as Woakes proved, inducing a nick off the former that Buttler pouched safely.

Relentless in his length, Woakes soon after accounted for Glenn Maxwell. Going back to being the Maxwell of the old, the No.4 batsman attempted a slog across the line to a well-directed delivery and was trapped lbw. Along with his two strikes, Woakes also pulled off a blinder at mid-on that sent Steve Smith back, giving Jordan the first of his three scalps.

Like Woakes, Jordan too was spot-on in terms of accuracy, conceding only one boundary in his four-over quota.

The early departures of Warner, Smith and Maxwell did make it tougher for captain Finch, but he certainly could have tried a little more. Instead, he used up too many deliveries that only added to the pressure.

Moeen Ali’s off-spin wasn’t even required as part-timer Liam Livingstone (1/15) too could do a fine job, bowling 10 dot balls without conceding any four or six throughout his spell, which only reflects the harrowing time Australian batsmen had out there in the middle. Adil Rashid’s wrong ’uns too were something they struggled to pick up.

Thereafter, Jason Roy and Buttler wasted no time to get England off to a flier. Roy didn’t get too many runs this time, but Buttler was in his elements, tormenting the Australian bowlers.