Down memory lane to relive the most spectacular sporting moments

With no live sporting action in sight, here are some moments unfolded this time, that year, reigniting the drama, the delight, and the despair quintessential to sport 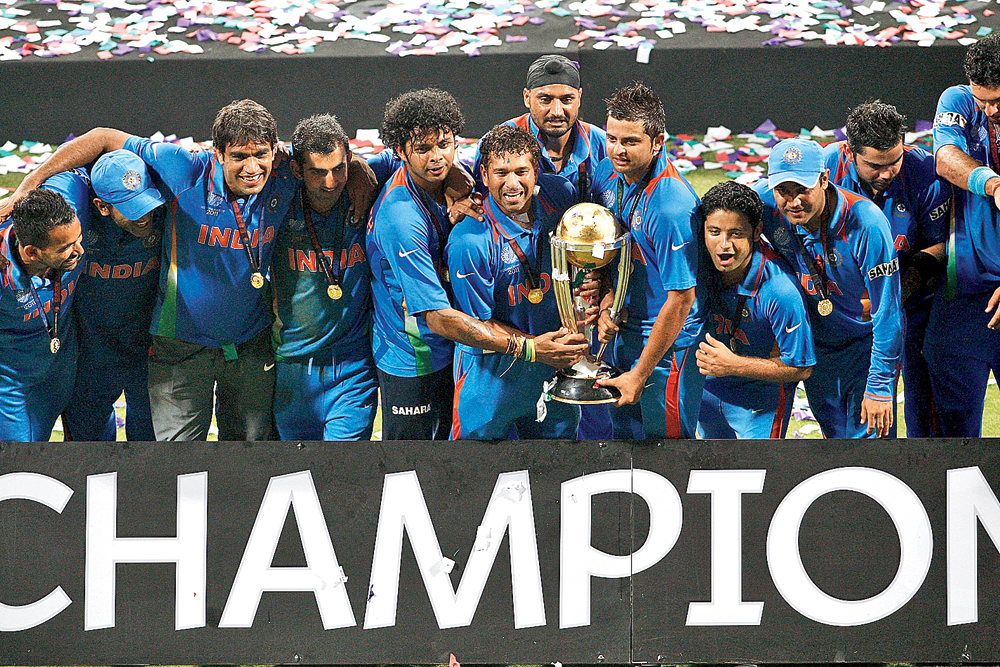 In focus: A wondrous Wankhede, an inspired 11, and a fantasy finish to conjure an unforgettable episode of Indian cricket!

April 2, 2011: Some days just write themselves. The setting, the characters, and the plot — everything nestles into its rightful place. The action follows the perfect trajectory — flirting with failure at one moment, scampering towards success at another. The intricate membrane of the television feels invisible, for I can locate myself in the stands enveloping an entire nation, rooting for the chosen few to unleash collective ecstasy using bat and ball. There is a sense of history dancing on an ever-approaching horizon, a once-in-a-lifetime experience seems within reach. India are facing Sri Lanka in the final of the men’s 2011 ICC Cricket World Cup at the Wankhede Stadium in Mumbai. A dream is in motion, playing out in front of a billion expectant eyes.

Zaheer Khan has not forgotten how the 2003 World Cup final began — with him conceding 15 runs off the very first over against Australia, a surrender of initial momentum that India never got back. Eight years later in the part-carnival, part-bullring atmosphere of a home final, India’s spearhead starts with discipline and caution. Only two runs are yielded from the opening over after Sri Lanka correctly call the toss and elect to bat first. Zaheer and his maverick pace partner Sreesanth are probing the Sri Lankan openers in the early exchanges, trying to force the excellent pair of the imperturbable Upul Tharanga and the flashy Tillakaratne Dilshan into a mistake.

India’s new ball diligence pays off, as Tharanga runs out of patience and edges from Zaheer into the gleeful hands of Virender Sehwag at first slip, culminating an 18-ball sequence where the southpaw could not score a single run off Zaheer. I jump out of my lucky chair. First blood to India. No team has ever won a cricket World Cup on home soil, but India’s swim against history is off to a good start.

Kumar Sangakkara arrives at the crease, and is joined by his partner-in-crime, Mahela Jayawardene in the 17th over, after Dilshan falls, rather freakishly, to Harbhajan Singh — the ball deflecting off the batsman’s wrist onto his body, and eventually, onto the stumps. Lady luck seems to have chosen her camp for the final.

The immensely experienced duo of Sangakkara and Jayawardene, co-authors of numerous chapters of greatness for their country, do what they do best and keep the strike ticking over. I am frustrated, though hardly surprised. Sri Lanka cross the 100 mark and look in control, their veterans having steadied a rocky ship.

MS Dhoni with the trophy
Sourced by The Telegraph

India need a breakthrough and Mahendra Singh Dhoni summons his star all-rounder to rotate his golden arm and carve an opening. Yuvraj Singh, enjoying a sensational tournament, answers the call and gets rid of Sangakkara just when Sri Lanka appear to accelerate. At the other end, however, Jayawardene continues accumulating runs with graceful ease, cutting through the Indian bowling like a surgeon with a scalpel.

Heading into the last 10 overs, I can sense that Sri Lanka are poised for a big finish. With five wickets still in hand, Jayawardene ups the tempo and is ably aided by two quick-fire cameos from Nuwan Kulasekara and Thisara Perera. India’s death bowling is failing them at the most crucial juncture, and not even Zaheer can arrest the steady leakage of runs. Jayawardene brings up a stellar 100 with consecutive boundaries. Like thousands of onlookers, I begrudgingly admire his marvelous effort. Perera ensures Sri Lanka end with a flourish, taking 14 runs off the last three balls, including a six to wrap up the game’s first half. India are in for a stiff chase. 275 runs separate the men in blue from a place in sporting immortality.

I am fairly confident that India are on the right track at half-time, but my confidence is dented almost immediately, as Sehwag — accustomed to kick-starting every innings in the tournament with a boundary — perishes in the first over. Lasith Malinga, the ace in the Sri Lankan deck, wraps Sehwag on the pads and there is no reprieve from the DRS. My heart skips a beat, the mind fears the worst.

I gain some temporary reassurance, as Sachin Tendulkar’s drives flow like a Bach symphony. Will the Master Blaster script the ultimate fairy tale and notch a 100th international century to clinch the one prize that has eluded him for over two decades? The answer, shatteringly, is no. Malinga breaks into a wild victory run encircling the pastures of the Wankhede, having just removed Tendulkar from the equation. There is pin-drop silence in my house, a deafening echo of nothingness sweeps the whole country. Tendulkar walks back. I am shell-shocked, utterly oblivious to the entry of Virat Kohli at 31 for 2.

The Delhi boys, Kohli and Gautam Gambhir, bat sensibly. Slowly, my nerves are easing. Every single is a comforting reminder that the mountain is being scaled. The promised paradise inches closer, and then, shoots out of sight once more. Kohli has to depart after an outrageous piece of athleticism from Dilshan, whose acrobatic dive from his own bowling completes a potentially game-turning caught and bowled. No need to panic, yet, for the next man in is going to be the competition’s best player and India’s middle order mainstay, Yuvraj Singh. But, in what seems a last-minute decision, out comes the Indian skipper instead, having endured a miserable World Cup with bat in hand. The World Cup final is on a knife-edge and MS Dhoni has taken guard.

The men of the hour

The effervescent eyes of Muttiah Muralitharan are sizing up the challenge, his final demonstration of genius at the international stage is underway. But Dhoni smothers the charm of cricket’s smiling assassin, Murali is kept at bay.

Gambhir and Dhoni, distinctly opposite in temperament, are calibrating their batting when it matters most. The overs are running out like quicksand with the Sri Lankan spinners in operation, but India are not letting matters pass them by. For the first time in the Indian innings, I am watching with solitary focus on each ball, consciously avoiding thinking of the role each delivery plays in the bigger picture of emotional deliverance.

With seven runs short of a deserved ton, Gambhir is dismissed; but one mistake cannot take away from an immaculate knock. Yuvraj’s turn has finally arrived and he joins Dhoni for the last laps in the epic journey. India have weathered the storm; the tempo is theirs to control.

It is the second ball of the penultimate over, and India need a mere four runs to become world champions. Dhoni’s display of chilling composure has already broken the Sri Lankan will. Kulasekara’s run up to the crease has an air of formality, an inevitability of failure. His half-tracker is latched onto by Dhoni, who launches it into the Mumbai sky, tracing the flight of the ball with his impassive eyes.

Dhoni’s shot has cleared the fence, the Indian captain can finally afford a smile. His unbeaten 91 has steered India to a first world title in 28 years. MSD’s titans have joined Kapil Dev’s heroes in the gilded pages of India’s cricketing legacy.

The Indian players are all over the Wankhede turf, running, embracing, living the dream. Sachin Tendulkar is carried around his cricketing backyard by a generation grateful for his inspiration. More than 40,000 spectators at the site of history are going berserk. A small part of me sympathises with the Sri Lankans and their honourable exhibition of the gentleman’s game, but the more overwhelming part is suffused with joy, joining a chorus of national celebration that is going to last for a considerable time. India have won the World Cup, and I am proud to feel what it means.

The view from the top

India’s 2011 triumph has been, in many ways, the high watermark for a golden generation. Barring the addition of the ICC Champions Trophy to the winner’s cabinet two years later, the grand occasion, since then, has invariably disappointed. Avenged upon by Sri Lanka in the World T20 final in 2014, outgunned by the West Indies in the same tournament two years later (ironically, at the Wankhede), and sandwiched between them, a listless semi-final collapse against Australia in the 2015 World Cup. The transfer of leadership from Dhoni to Kohli has not broken the knockout jinx — a hapless defeat to Pakistan in the 2017 Champions Trophy and an ill-fated chase against New Zealand in another World Cup last-four exit last year testament to the heartaches of recent times.

And yet, for lovers of Indian cricket, the glory days are bound to be back. India’s enormous depths of cricketing talent are constantly being replenished, and for all the fears of being the new chokers of the game, a repeat of the 2011 extravaganza should not be far away. Until then, this magnificent Mumbai night will be the pinnacle of the modern era — a proof of the indomitability of cricket’s finest, a remarkable witness to the magical moments when more than a billion hearts resounded as one.