Diego Maradona: King of kicks dies of heart attack at the age of 60

Certainly, one day we’ll kick a ball together in the sky above: Pele 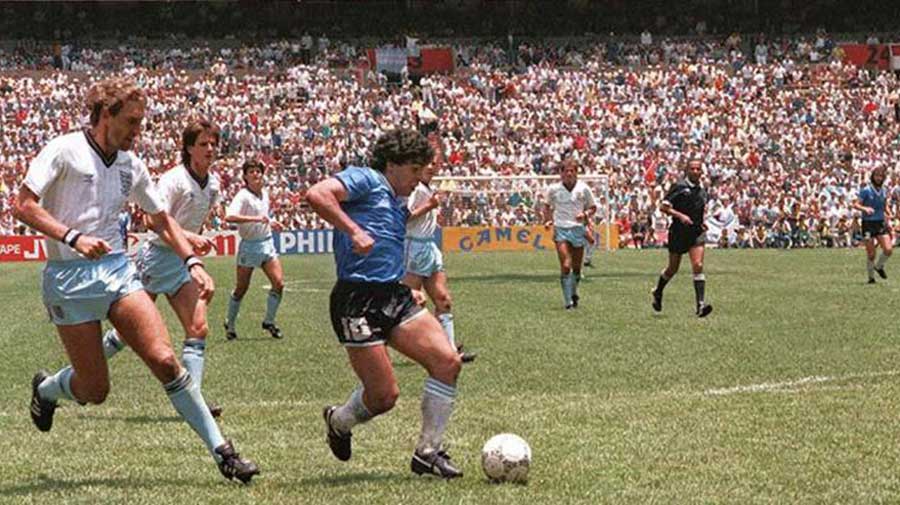 If Muhammad Ali floated like a butterfly, Diego Maradona turned like a little eel. Till he slipped away out of sight.

The tempestuous Argentine who became one of football’s greatest players with a roguish cunning and extravagant control while pursuing a personal life rife with drug and alcohol abuse and health problems, died on Wednesday in Tigre, Argentina. He was 60.

His spokesman Sebastián Sanchi said the cause was a heart attack. Argentina’s government declared three days of national mourning. A pall descended on the world of football.

Maradona had been admitted to a clinic in La Plata, Argentina, on November 2 — three days after his 60th birthday — experiencing what his doctor, Leopoldo Luque, described as depression, anaemia and dehydration. The next day Dr Luque told reporters that Maradona had a subdural haematoma — bleeding that collects in tissues surrounding the brain and can be caused by a head injury — and would undergo surgery.

The haematoma was most likely caused by an accident that Maradona could not remember, Dr Luque said, according to Associated Press.

Wearing the No. 10 jersey of a playmaker, Maradona had led Argentina to World Cup victory in 1986, scoring one of the game’s most controversial goals and one of its most celebrated in the span of four minutes during the quarterfinals against England.

In 2000, he and Pele of Brazil were voted by world football body Fifa as the sport’s two greatest players. Yet while Pele’s legend grew into international reverence, Maradona’s ability to surprise and startle developed a darker edge as he became addicted to cocaine during his playing days in the 1980s.

His thick musculature having bloated into unhealthy corpulence, Maradona was hospitalised in Buenos Aires in April 2004 with what doctors described as a weakened heart and acute breathing problems. He then entered a psychiatric hospital there and, that September, left for further rehabilitation treatment in Havana.

His numerous health issues also included gastric bypass surgery to contain his weight and treatment for alcohol abuse. As a spectator at the 2018 World Cup in Russia, Maradona appeared to collapse and was treated by paramedics as Argentina secured a dramatic late victory over Nigeria to advance to the second round of the tournament.

Speaking to an Argentine television channel in 2014, Maradona said, “Do you know the player I could have been if I hadn’t taken drugs?”

Such was the complexity of Maradona’s personal life, according to news accounts, that he was the father of eight children, including two daughters with his wife at the time, Claudia Villafañe — they later divorced — and three children fathered while he was in Cuba undergoing treatment for his cocaine habit.

Diego Armando Maradona was born on October 30, 1960, in Lanus, Argentina, and raised in the Buenos Aires shantytown Villa Fiorito, where he took up football on dusty streets with an urchin’s resourcefulness. By age 15, he had turned professional. He later played for Barcelona and Napoli, a team with a mediocre history that he almost singlehandedly turned into a title contenders.

In his autobiography, Maradona wrote that he had become so skilled a player as a youth that opposing coaches sometimes accused him of being an adult midget.

At his feet, the ball seemed to obey his command like a pet. He played with a kind of brilliant camouflage, seeming to be somnolent for long stretches before asserting himself at urgent moments with a mesmerising dribble, astounding pass or stabbing shot.

The fame and infamy that attended his career and his life were on display for the world on June 22, 1986, when Argentina faced England in a World Cup quarterfinal at the Azteca Stadium in Mexico City.

Six minutes into the second half, the 5-foot-5 Maradona, competing with six-foot-tall English goalkeeper Peter Shilton for an aerial ball, jumped high into the air and punched the ball into the net. The “hand of God” was born.

“Brazen and shameless, Maradona was all mock innocence, talking about the ‘hand of God,’” English journalist Brian Glanville wrote in his book The History of the World Cup. “For England, rather, it was the hand of the devil.”

Four minutes later, Maradona scored after a dribble of 70 yards through five British players and a final feint past Shilton. Deftly, he changed directions like a slalom skier slashing from one gate to another.

In his book The Simplest Game, Paul Gardner wrote: “No player in the history of the World Cup had ever dominated in the way Maradona ruled over Mexico 86.”

The goal reverberated around the world, and two more goals of exquisite quality followed in the semi-finals against Belgium before Maradona set up the winner in the final with a pass through the middle of the West German defence.

Across the world, something unthinkable happened. One half of Calcutta — a city till then as staunch a Samba supporter as Sao Paulo could be expected to be — decided to be unfaithful to Brazil and turned Argentina fans.

Twenty-two years later, it was Calcutta’s turn to surprise and startle Maradona.

“I’m overwhelmed that so many people know and love me in this part of the world. I’ve been surprised many times in my life and thought I could not be surprised again,” he said, looking at the tumultuous mobs of fans during a trip to Calcutta in 2008.

“But today I have realised that there is more in store for me. I love the passion people have for football here and I will love to be back.”

Maradona had threatened to will his way through the 1990 World Cup — gathering a loose ball, feinting around a defender and passing through a thicket of legs to assist the only goal in a quarterfinal win against Brazil. In the semi-finals, against hosts Italy, Maradona scored the penalty that put Argentina ahead as it won the shootout.

This was Maradona in his glory. The match was played in the raucous port city of Naples, where Maradona played and enjoyed demigod status. Audaciously, he had asked the fans there to cheer for Argentina over Italy.

But there was no magic left for the 1990 final against Germany. Maradona was bruised from being fouled repeatedly, and he lacked several prominent teammates who had been suspended for committing flagrant fouls. Argentina lost, 1-0, on a penalty kick.

The Italians at Rome’s Olympic Stadium booed Maradona whenever he touched the ball. After all, he had eliminated Italy from the tournament. Afterward, he sourly charged that the penalty had been called as retaliation against Italy’s premature exit.

His own career then began to implode.

In 1991, Maradona tested positive for cocaine while playing for Naples and received a 15-month suspension. His behaviour grew erratic. In February 1994, he fired an air rifle at reporters outside his summer home in Argentina.

Later that year he was thrown out of the World Cup, held in the US, after testing positive during the tournament for a cocktail of stimulants. But such was his renown that he later coached Argentina in the 2010 World Cup, where they were embarrassed 0-4 by Germany in the quarterfinals.

Maradona had a peripatetic career coaching club teams in Argentina, the United Arab Emirates and Mexico. In September, he was hired to coach the Argentine club Gimnasia y Esgrima in La Plata. On his 60th birthday, Maradona attended his team’s match against Patronato, but left early in what became a 3-0 victory, prompting questions about his health.

When he entered a hospital on November 2, Dr Luque said, Maradona had been feeling sad, lacked an appetite and had trouble walking.