Advertisement
Home / Sports / CWG 2022: Mirabai Chanu lifts gold like it was hers

CWG 2022: Mirabai Chanu lifts gold like it was hers 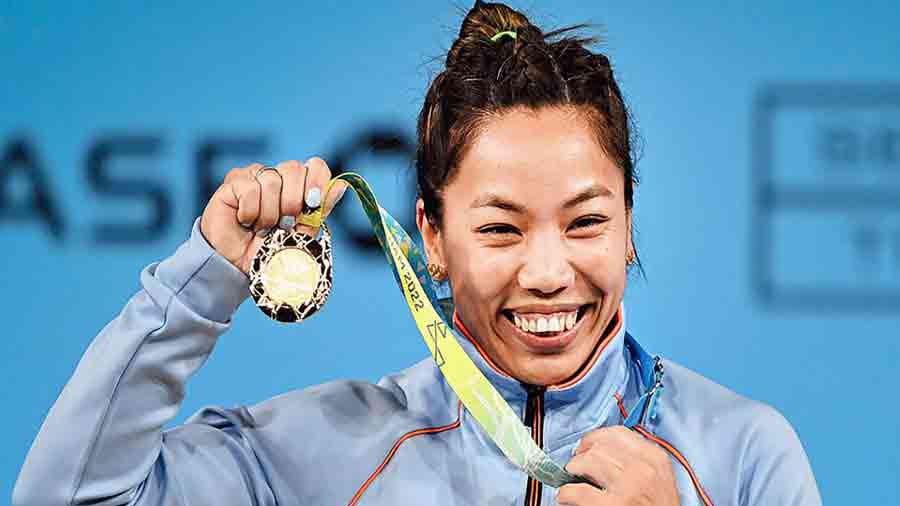 India lived up to its reputation as weightlifting heavyweights in the ongoing Commonwealth Games in Birmingham by claiming three medals on Saturday.

While Olympic silver medallist Mirabai Chanu earned the country the first gold of the meet, Sanket Sargar and Gururaja Poojary bagged silver and bronze in their respective categories. Mirabai, as expected, was far superior than her competitors in the women’s 49kg category.

She was actually competing with herself. Mirabai’s total lift of 201kg (88kg + 113kg) was 29kg more than the second-placed Marie Hanitra Roilya Ranaivosoa’s 172kg (76kg + 96kg) from Mauritius. Canada’s Hannah Kaminski was behind by another one kilogram (74kg + 97kg).

t it was Sanket who earned India its first medal — a silver — at the ongoing Games in the men’s 55kg category. Sanket was the favourite to win gold, but an injury in his second attempt of the clean and jerk round peggged him back. His total lift was just one kilogram short of the gold medal winner, Malaysia’s Bin Kasdan Mohamad Aniq.
PTI

The 21-year-old Sanket, who had to balance working at his father’s paan shop in Sangli Maharashtra, and his passion for weightlifting, was heartbroken to miss the gold. Competing in the men’s 55kg category, Sanket injured his right elbow while attempting to lift 139kg in his second clean and jerk attempt. He managed a total of 248kgs (113kg + 135kg) to finish just one kilogram behind Malaysia’s Mohamad Aniq, who smashed the Games record in clean and jerk as he lifted 249kg (107kg + 142kg) to win the gold. “I am not happy with myself because I have been training for the last four years only for the gold,” the silver-winning Sanket, who dedicated his medal to the country’s “freedom fighters,” said.

Gururaja finished third in 61kg category. Gururaja was placed fourth after the snatch competition. He lifted 151kg in his final clean and jerk attempt to seal the bronze with a total lift of 269kg. Malaysian Aznil Bidin won the gold.

PHENOMENAL!Bindyarani Devi created a Games Record of 116Kg in the 3rd lift in Clean and Jerk and won

With the 116kg clean and jerk lift, which was also her personal best, Bindyarani smashed the Games record.  Nigeria's Adijat Adenike Olarinoye also obliterated the Games record in snatch and total effort with an aggregate of 203kg (92kg+111kg) to win the gold medal. Local favourite Fraer Morrow finished third with a total lift of 198kg (86kg+109kg).