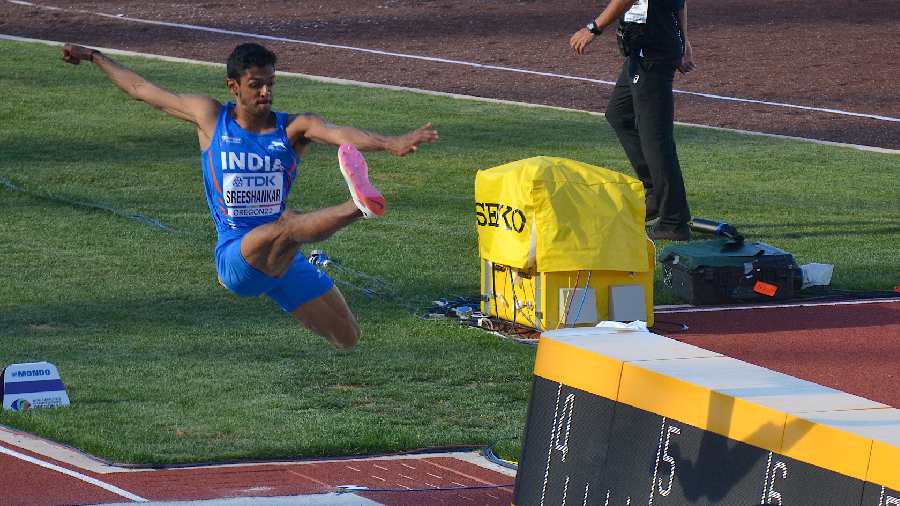 Olympic champion Neeraj Chopra's withdrawal was a huge blow but the Indian athletics team for the Commonwealth Games still has multiple medal contenders who will vie for the top honours when the blue-riband track and field events begin here on Tuesday.

Chopra will not be defending the javelin throw title he had won in the last edition in Gold Coast due to a groin strain he suffered during his silver-winning feat at the World Championships in USA last month.

In his absence, the likes of long jumper Murali Sreeshankar, steeplechaser Avinash Sable, veteran discus thrower Seema Punia and javelin thrower Annu Rani are expected to step up and try to achieve glory in the multi-sporting spectacle.

India is also expected to win at least a medal from one of the three triple jumpers in Praveen Chitravel, Abdulla Aboobacker and Eldhose Paul, who made it to the World Championships final, as they are currently among the best performers in the Commonwealth this season.

With several world-class athletes emerging, especially after Chopra won a historic athletics gold in Tokyo Olympics last year, India would be looking for at least half a dozen medals in the Birmingham Games.

The country's best athletics medal haul had come at the Delhi CWG in 2010 with 2 gold, 3 silver and 7 bronze. That performance will surely be difficult to match but the Indians would be looking for their second best show ever.

The second best show from the Indian athletics contingent at the CWG till now has been the three-medal hauls (1 gold, 1 silver, 1 bronze each) in the 2014 and 2018 editions.

Indian action will begin on Tuesday with the men's long jump qualifying round which will feature Sreeshankar and Muhammed Anees Yahiya.

National record holder Sreeshankar has been in fine form with 8m-plus jumps on many occasions this season though he failed to impress in his seventh place finish in the World Championships final with a best jump of 7.96m.

He could have won at least a bronze had he matched his season's and personal best of 8.36m.

Sreeshankar will head into the Games as season leader among the athletes from the Commonwealth countries.

Yahiya has also jumped 8m-plus five times this season with a best of 8.15m in March and he is also in medal contention if he qualifies for the final to be held on August 4.

A medal can be expected straightaway on the first day of competition from the veteran Seema and compatriot Navjeet Kaur Dhillon, the silver and bronze winners of the last edition respectively.

Seema is gunning for her fifth medal in as many appearances after winning three silver and one bronze so far. The most decorated Indian athlete at the CWG, she has never returned empty-handed though her best performance this season was the 57.09m effort at Chula Vista in USA last month.

She had won a silver in the last edition with a best throw of 60.41m.

Dhillon has not crossed the 60m mark this year with a best of 58.03m in May, but in a weak field, she can win a medal if she improves her season's best.

National record holder Manpreet Kaur will also be in action on Tuesday in women's shot put qualifying round while star sprinter Dutee Chand will run in 100m dash round one heats.

High jumper Tejaswin Shankar, who was included last minute on the orders of Delhi High Court after being ignored in the original squad, will also have his qualifying round.

With five finalists in the Eugene World Championships heading to Birmingham where competition will be relatively easier, India would fancy their chances to win a handful of medals.

Sekar Dhanalakshmi, who was to compete in women's 100m and 4x100m relay, and Aishwarya Babu, who was to feature in long jump as well as triple jump, were pulled out of the original 36-member team after failing dope tests which brought shame to the country.

Dhanalakshmi would not have much chance in 100m but her absence would deal a blow to the women's 4x100 relay team though India are not medal favourites in the presence of England, Jamaica, Canada and Australia.

Aishwarya could have been a bronze medal contender with her national mark of 14.14m set at the National Inter-State Championships last month.

Another member of the 4x100m relay race, MV Jilna was also pulled out at the last minute after failing a dope test. The 4x100m relay team is thus left with only four members in Dutee, Hima Das, Srabani Nanda and NS Simi.