There were no errors committed during the lift: Sargar 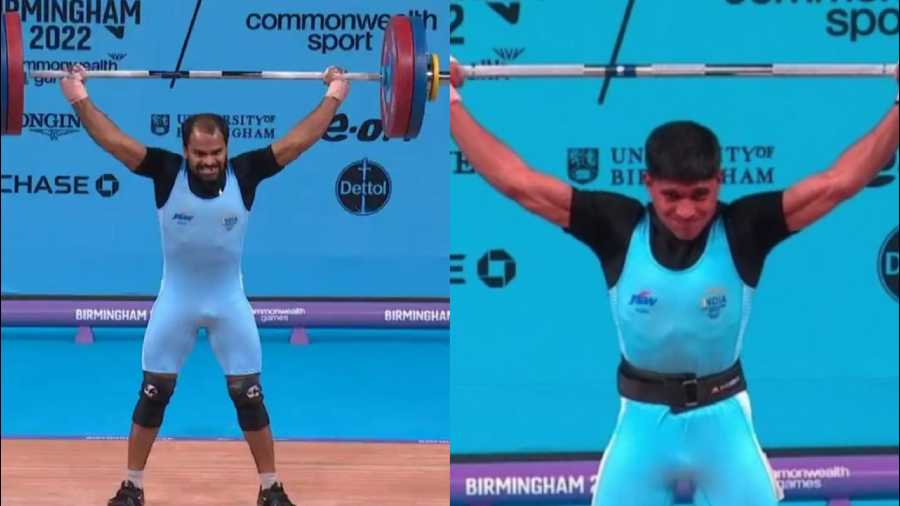 Partially fulfilling the promise he made to himself four years back, young Sanket Sargar won a silver medal while Gururaja Poojary made a successful switch to Olympic weight category, as weightlifters put India on medal tally at the Commonwealth Games here Saturday.

Sargar targetted a gold medal but injured his right elbow while attempting to lift 139kg in his second clean and jerk attempt to eventually settle for a second place in 55kg category.

Gururaj was placed fourth after snatch competition. He lifted 151kg in his final clean and jerk attempt to to seal the bronze with a total lift of 269kg, edging out Canada's Youri Simard (119kg).

For Sargar, who was managing a paan shop with his father in Sangli, Maharashtra it indeed is a feat to cherish. Life has thrown challenges at him and he accepted them with grace and found a way to overcome them with sheer dedication.

"There were no errors committed during the lift. I felt a sudden load on my right elbow so I couldn't control it and there were two clicks I heard," Sargar said at the mixed zone.

In fact at the Commonwealth Championships in Tashkent last December where he won a silver, he had lifted 143kg with ease.

"In training, I regularly lift 143kgs. I had to go for it as there was a gold at stake. I am not happy with myself because I have been training for the last four years only for the gold.

"I am a bit happy but mostly feel I could have done better. I did not take the risk to go beyond my national record because completing a lift is important as well," he said about not going beyond 113kg in snatch.

Sargar said he had to take the risk of lifting 139kg as a "gold was on offer".

"Before the last lift, sir (coach Vijay Sharma) asked me whether I wanted to go ahead. He tried to stop me at first but later encouraged me. I lift more than this in practise."

The lifter said he would undergo scans to know the extent of his injury.

"I will go for X-ray after the dope samples were collected and the actual status will be known. Currently I'm in a lot of pain, please let me go fast," he pleaded at the Indian scribes.

"I want to dedicate this medal to all the freedom fighters who didn't care for their lives and gave us independence," said Sargar who became the second Commonwealth medalist from Sangli after wrestler Bharti Mane (Bharati Mane).

"Yes people would be happy back home but I'm disappointed of losing out on a gold. Hope to come back stronger," he added.

The three-time national champion opened up a huge gap with his second lift in snatch and virtually sealed it in his third attempt when he equalled his personal best of 113kg.

Having missed out on the gold by a mere one kilogram, in hindsight it seemed if India had a flawed strategy of not aiming to go beyond his personal best of 113kg in the snatch.

"Every lifter has his limitations and we didn't want to cross that. He had clean and jerk to go and the lead was enough not to take any risk," coach Pramod Shama explained about their strategy.

It was a story of sacrifices for Gururaja after switching the Olympic discipline, following his silver medal at Gold Coast which came in the 56kg category.

"I got married in May last year but could not be with my family as I joined the camp," said Gururaja.

Then after coming here he was down with fever and could not give his best at the training.

"I'm very happy with my performance. I could not train properly and had a fever, knee and wrist pain. Looking at the way, it was a very good effort."

He further credited the national coach to motivate and go past the Canadian rival in the clean and jerk.

"He egged me on and told me to 'give my best, otherwise all my sacrifices of leaving home and staying alone would go in vain'. It really motivated me and I went for the bronze," he said.

"I hope this is just the beginning for me and I will improve from here onwards looking at the Paris Olympics," he signed off.

The Indian men and women table tennis players continued their impressive show at the Commonwealth Games, recording their second straight wins in the team events here on Saturday.

First up, the women's team, led by Manika Batra, outclassed Guyana 3-0 in a Group 2 match while the men's side also thrashed Northern Ireland by an identical margin in a Group 3 game.

The women's team, defending the title it had won at Gold Coast four years ago, had enjoyed a winning start to its campaign on Friday after crushing South Africa and Fiji by identical 3-0 margins.

On the second competition day, the first to turn up was the pair of Sreeja Akula and Reeth Tennison and they steamrolled Natalie Cummings and Chealsea Edghill 11-5 11-7 11-7 to put India 1-0 ahead.

Then, reigning Commonwealth Games champion Batra, who became the first Indian table tennis player to win a gold in the women's singles in the last edition, decimated Thuraia Thomas in straight games 11-1 11-3 11-3.

In another woman's singles match, Reeth fought hard to register a 11-7 14-12 13-11 win against Chealsea Edghill, who put up a spirited show. Reeth's win ensured that India won the tie convincingly.