The 22-year-old acknowledged the role of mentor Gautam Gambhir, which was instrumental in his getting picked for the franchise 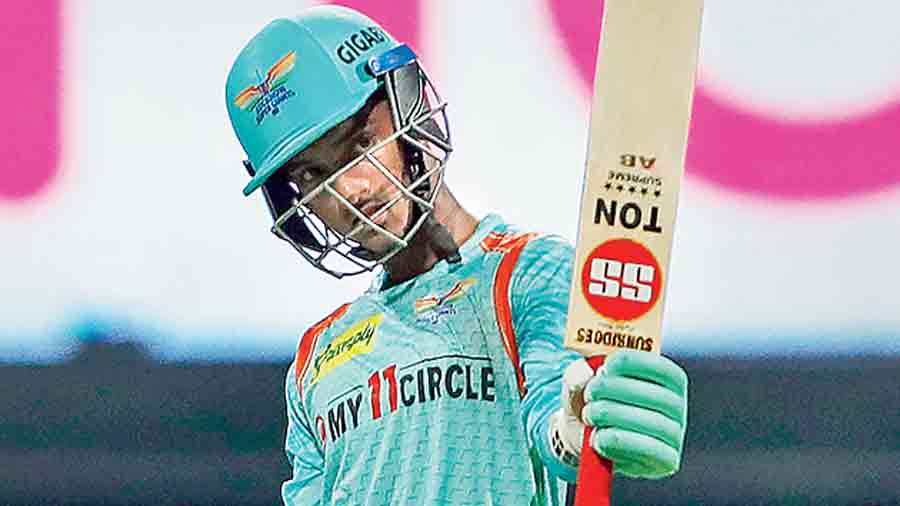 Just five Syed Mushtaq Ali T20 Trophy games for Delhi in January 2021 was all the experience Ayush Badoni had going into Lucknow Super Giants’ clash versus the other entrants, Gujarat Titans, in Mumbai last Monday.

In those five matches, Badoni batted only once. More than 14 months later, when he finally got his next chance with the bat, Badoni came across a really tough situation at the Wankhede with Lucknow four wickets down for only 29 in the fifth over.

The 22-year-old, however, managed to overcome the difficult period, gave his senior partner Deepak Hooda some much-needed assistance and then accelerated that ensured Lucknow a respectable total although they couldn’t win the game. Badoni, though, was able to make some sort of a statement as after going unsold in the IPL auction for the last three years, he hit a compact 54 off 41 balls to become the ninth Indian cricketer with a half-century on debut in the premier league.

It was a timely knock for the youngster, vindicating Lucknow’s decision to rope him in during this year’s auction (at his base price of Rs 20 lakh). Also, the way he launched himself against the likes of Lockie Ferguson and Rashid Khan in the Titans’ attack underlined how the politics and murky affairs in the Delhi and District Cricket Association (DDCA) tried to flush another talent down the drain.

Amit Bhandari, who was one of the DDCA selectors when he first spotted Badoni at Sonnet Cricket Club in New Delhi, recalled: “When we had picked him for the Delhi U-19 and U-23 teams (in the 2017-18 season), he was impressive right away. Just that he needed to convert 50s into 100s.

“In the following season, we included him in the Delhi Ranji Trophy probables and he then got selected in the India U-19 team, doing well on the Sri Lanka tour. He hit an unbeaten 185 in a four-day game there (in July 2018) and also scored 52 (not out) in the U-19 Asia Cup final thereafter (October 2018), which earned him accolades from Rahul Dravid (then India A and U-19 head coach) as well.

“Surprisingly, even after those performances, he still has to wait for his Ranji debut.”

Bhandari, however, believes Badoni will not have to wait too long for a first-class debut, particularly if he remains consistent in this IPL. “See, why Ayush wasn’t selected in the Delhi Ranji squad this season is something only the current (DDCA) selectors can answer.

“But the talent that he is, he’ll surely find his way in. Even in the India A team very soon. You won’t come across too many 22-year-olds pulling a genuinely quick bowler like Ferguson with such ease and start improvising as soon as the situation demands,” the former pacer, who played two ODIs for India and took five wickets, stressed.

Badoni himself acknowledged the role of Lucknow mentor Gautam Gambhir, which was instrumental in his getting picked for the franchise.

Importantly, the youngster didn’t get frustrated or brood over the snub from Delhi. He kept preparing himself for the IPL. Make no mistake, when Lucknow face four-time champions Chennai Super Kings at the Brabourne Stadium on Thursday, young Badoni will surely be brimming with confidence.

Chennai Super Kings are set to have Moeen Ali back for their IPL 2022 clash versus newbies Lucknow Super Giants at the Brabourne Stadium in Mumbai on Thursday.

The England all-rounder, who couldn’t play the Super Kings’ opener versus Kolkata Knight Riders due to visa issues, may come in place of Mitchell Santner. The New Zealand left-arm spinner wasn’t very effective against the Knights last Saturday and it appears that if Moeen does get into the XI, Santner is the likely one to be benched.

Like CSK, Lucknow too lost their maiden IPL game against Gujarat Titans, the other debutants. In these circumstances, they do need their captain KL Rahul to come good with the bat upfront. (Our Bureau)