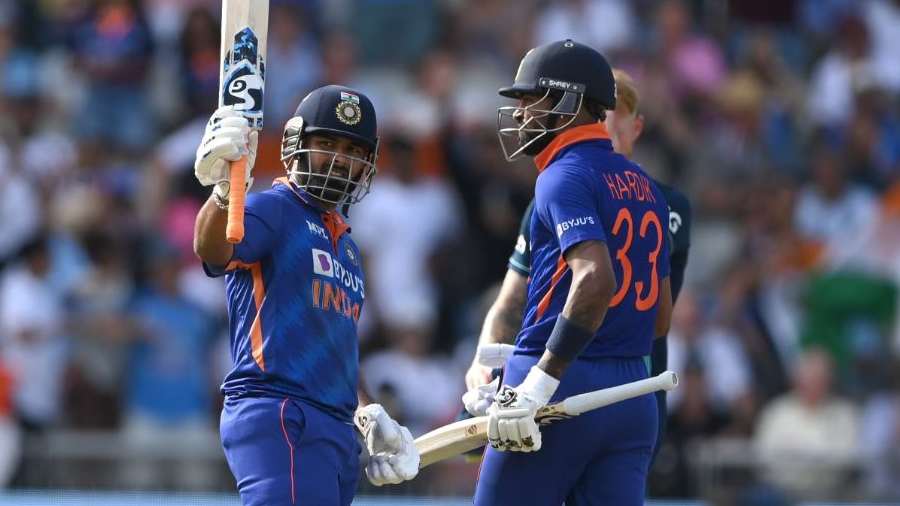 The top order’s vulnerability against disciplined bowling threatened to hurt India again. But Rishabh Pant (125 not out off 113 balls) and Hardik Pandya (71 and 4/24) rescued the team, earning them a fighting five-wicket win in the third and final ODI in Manchester on Sunday. After the T20Is, India clinched the ODI series as well, winning 2-1 and finishing the tour on a high. The India bowlers, even in the absence of spearhead Jasprit Bumrah who was down with back spasm, did a decent job upfront as they restricted England to 259 after asking the home team to bat first.  That, in spite of England captain Jos Buttler (60) regaining his form.

Hardik Pandya stood out among the Indian bowlers, his short-pitched stuff proving useful. But in reply, India found themselves tottering at 72 for 4 in the 17th over with all the four dismissed batsmen perishing to deliveries pitched outside the off-stump.  It was left-arm quick Reece Topley who again polished off India’s top order, dismissing Shikhar Dhawan, captain Rohit Sharma and Virat Kohli, who was dismissed in an all too similar fashion yet again as he nicked an away-going delivery to the wicketkeeper.

Suryakumar Yadav, too, didn’t last long as a bit of extra bounce from Craig Overton resulted in his caught-behind dismissal.  In between, Buttler missed a stumping opportunity that gave Pant a reprieve when he was on 18. That proved to be way too costly for England as Pant made full use of it.  After his game-turning show with the ball, Pandya’s confident beginning with the bat, riding mainly on his timing, certainly took the pressure off Pant.

Conditions at Old Trafford became easier for batting as the game progressed and while Pandya kept the scoreboard ticking, Pant took his time to settle down, avoiding any sort of unnecessary risk. Once Pant got into his groove, the fierce drives, cuts and pulls flowed from his bat as he then raced to his maiden ODI century. Importantly, the 16 fours and two maximums he hit were mostly proper cricketing ones. He didn’t have to resort to reverse scoops or other fancy shots off the opposition quicks, as he often does in Test cricket.  Pant’s temperament and the maturity he showed in this run chase also stood out.

Earlier, alongside Pandya’s bowling, over-aggression was also a reason that restricted England to below 280 as for the third time on the trot, their innings failed to last the full 50 overs.  Bumrah’s replacement, Mohammed Siraj, in his very first over induced Jonny Bairstow into a false stroke before picking up Joe Root. Jason Roy and Ben Stokes counter-attacked thereafter, but in came Pandya then and quickly he reduced England to 74 for 4 in the 14th over. Hitting the deck hard, Pandya removed both the set batsmen, putting India on top again. Pandya’s figures in his first spell read — 4-3-2-2. That had a big impact on the game.