Thank New Zealand way of life, everyone is respectful of my beliefs: Ajaz Patel

A devout Muslim, the 33-year-old said he never faced any discrimination of any sort in his adopted homeland 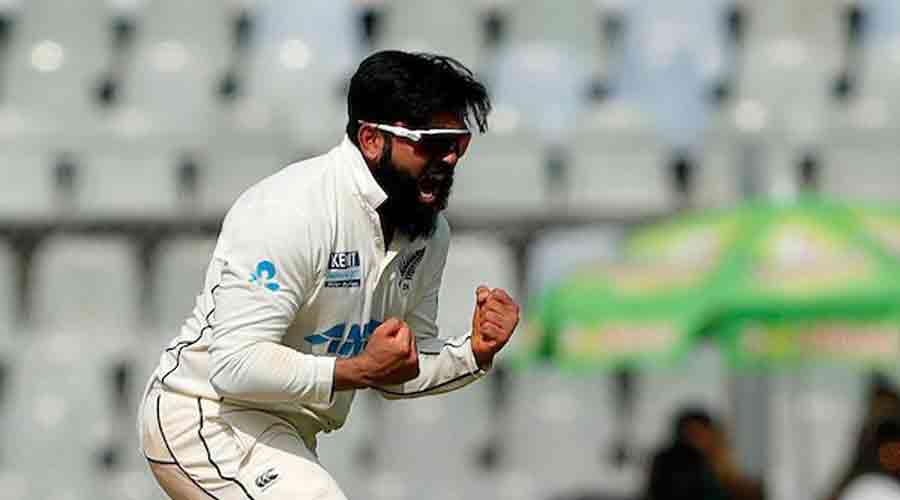 An unassuming boy from Jogeshwari in Mumbai, who had left for New Zealand with his family when he was eight, returned to script history in the city of dreams last week.

Left-arm spinner Ajaz Patel, who became the third bowler to take all 10 wickets in a Test innings after Jim Laker and Anil Kumble, on Monday recalled how he had been made to feel at home in Auckland. Having gone through the domestic grind of New Zealand cricket, he is the fourth Indian-origin cricketer after Dipak Patel, Jeetan Patel and Ish Sodhi to represent the Kiwis. Rachin Ravindra is the latest on the list.

“So I wouldn’t change it for the world. And yes, I also call myself an Indian by heritage and I’m proud of that too,” Ajaz said during a virtual interaction.

A devout Muslim, Ajaz, 33, said he never faced any discrimination of any sort in his adopted homeland. Rather he and his family were looked after with extra care during the March 2019 terrorist attack at a mosque in Christchurch.

Protest in sport against social discrimination and racism has become common over the last 18 months since the murder of George Floyd and the rise of the Black Lives Matter movement. English cricket has recently been rocked by racism allegations after British-Asian cricketer Azeem Rafiq disclosed how he and other players of Asian background had been subjected to racist treatment and offensive language during their playing days at Yorkshire.

But Ajaz said he never faced any such treatment in New Zealand and the authorities have even respected his religious sentiments.

“We speak about diversity and racism now from a sporting perspective, but I don’t think it’s something that so much influenced me particularly in my culture ... or in my upbringing, but I won’t say it doesn’t exist.

“I’ve actually through my journey felt quite comfortable in New Zealand. I’ve been very, very grateful that the Black Caps environment as soon as I came, they’ve been very very respectful about my culture, my beliefs, my rituals… like for me if I need halal food they will source it from anywhere if they have to.

“I remember my debut season (in 2018) they sent someone along with me to the masjid so that I could pray and also in the change room so if I need to pray, guys are very respectful and give me the space and the time to pray,” the soft-spoken Ajaz recalled.

He also recalled a touching gesture from his neighbours back home following the Christchurch attack. “When that happened it impacted the Muslim community a lot. We all were scared at that time. But the way our government handled it and the entire community, we received a lot of love,” Ajaz said.

“My mother walks out of home in a burqa, there is no judgement there. When the attack happened, the construction in our new house was going on.

“The neighbours must have seen my mother in a burqa (and found that we were Muslims), what our neighbours did was they put a plant on the staircase and there was a letter which said ‘we support you and you are part of our community’.”

Ajaz is not sure if his rare 10-wickets-in-an-innings feat would prove to be life-changing but would be happy if he gets to play 80-90 Tests for New Zealand. “I’m not too sure to be honest with you. I’m very much in the present at the moment,” said the left-arm spinner when asked if he expects his life to change.

“Yes, I’ve achieved something amazing, but it’s a new day and there’s more cricket to come. So for me, it’s about staying grounded as the person that I am, down to earth and nothing’s really changed.

“And it’s not going to really impact me too much because I know there’s a lot more left in my career. And if you look at my career, I’m 11 games in and I hope to be one of those cricketers that’s played 80 or 90 games for New Zealand by the end of my career.”