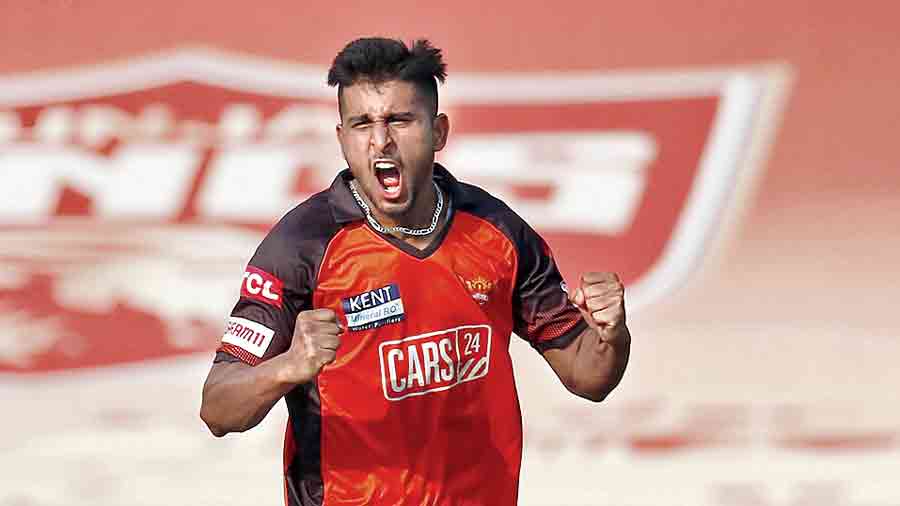 Collective effort paid off for Sunrisers Hyderabad as they brushed Punjab Kings aside by seven wickets at the DY Patil Stadium in Navi Mumbai on Sunday. It certainly has been a great turnaround for the Sunrisers as, after losing their first two games, they have now won four in a row .

A bulk of the credit for the Sunrisers’ victory should go to their bowlers, particularly Bhuvneshwar Kumar (3/22) and young Umran Malik (4/28), who is turning out to be a pace sensation. Later, Aiden Markram (41 not out) and

Nicholas Pooran (35 not out)  bail the Sunrisers out from a tricky position and took them home with seven balls to spare.

Earlier, Bhuvneshwar and Umran combined well to restrict Punjab to 151 after the Sunrisers won the toss and opted to bowl. For Punjab, what also hurt them was the absence of their regular captain Mayank Agarwal, who had sustained a toe injury during practice on match eve.

As if that wasn’t enough, Punjab also lost makeshift skipper Shikhar Dhawan early. It was primarily due to Liam Livingstone (60) that Punjab could cross 150.

For the Sunrisers, the target was modest. But the pitch being a little bit sticky, the chase could well have become tougher. In fact, the Sunrisers were a tad worried when leg-spinner Rahul Chahar’s double strike, dismissing the in-form Rahul Tripathi and Abhishek Sharma, reduced them to 77 for 3 in the 11th over.

However, Markram and Pooran’s unbroken 75-run fourth-wicket stand clinched it for the Sunrisers.

Not often does one come across a maiden bowled and four wickets falling in the final over of an innings in a T20 game. But Umran, improving in every game, struck thrice out of the four wickets (including a run out) that fell in the last over of Punjab’s innings without conceding a run.

Agreed, Bhuvneshwar made the job easier with the wickets of Livingstone and Shahrukh Khan (26) in the slog overs. But one must give it to Umran for bowling fast and accurately for most part of his spell.