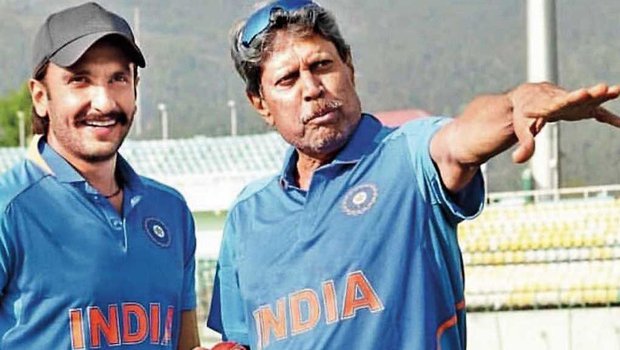 From a Lover like RAM to a Lover like BAJIRAO,
From a Raw KHILJI to GULLY ka BOY and now the eminent KD in 83,
Only Legends can justify Legendary Roles!
Wishing you a very Happy Birthday @RanveerOfficial, tons of luck, love, and blessings!#83TheFilm pic.twitter.com/LGyaak2zMI

First look of @RanveerOfficial as a kapil paji in his upcoming movie #83 Can't wait to watch 🤗 pic.twitter.com/7WfSsYp8gp

Here’s to moving into another year filled with successes. Keep your energies high & dreams alive. Happy birthday, brother! Btw, killing it with the first look of ’83. @RanveerOfficial pic.twitter.com/0DfOafdAnE

The actor, who turned 34 today, has played historical characters twice. He was starred in the role of Peshwa Bajirao II in “Bajirao Mastani” and Alauddin Khilji in 'Padmaavat' in his career spanning nine years. “83” would be Raveer’s first film in which he would play a living legend. Speaking about getting into the skin of the character he plays in the Kabir Khan-directed film, Ranveer had reportedly told media, 'Playing a living legend poses a unique set of challenges, and your approach to the preparation for that character has to be all the more intensive. And it has been. But at the same time, it has been very rewarding and fulfilling.'

Before receiving surprise gifts, actor Ranveer Singh came up with a surprise for everyone on his birthday today sharing his new look in his much awaited film “83”—a biopic on Kapil Dev. The film teaser, where Ranveer appears like a carbon copy of the cricketer, has the entire Twitterati excited.

'On my special day, here's presenting the Haryana hurricane, Kapil Dev,' Ranveer captioned his tweet from the film to be released in April next year. His character playing Dev is seen dressed in a white shirt, spinning the ball with a fierce look in his eyes in the post.

Playback singer and musician Anup Jalota’s birthday wish to Ranveer came with these words: “From a lover like Ram to a lover like Bajirao, from a raw Khilji to a Gully ka boy and now the eminent Kapil Dev in “83”. Only legends can justify legendary roles. Wish you a very Happy Birthday. Tons of love, luck and blessings.”

Cricketers and celebrities couldn’t stop themselves from applauding the Gully Boy actor from pulling off their Kapil paji’s look from his youth days with such perfection.

Ranveer is said to have stayed at Kapil Dev’s house for ten days to be able to do justice to his role. 83 is being shot in London at present.

Happy Birthday, Tiger 🐅 !!! @RanveerOfficial! Always keeping your eyes on the prize & not giving up until you achieve it! The do or die attitude is inspiring! Love this look! Have a great year! Lots of love! pic.twitter.com/KvJzohYVot