I am really happy that it’s been changed to run out. It always should have been run out: Sachin Tendulkar 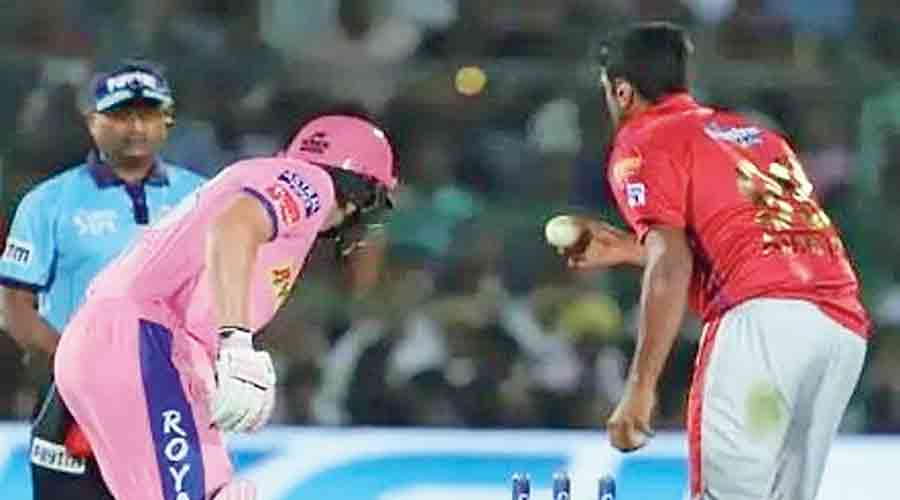 Ashwin running out Jos Buttler (left) after spotting he had left his crease before the ball had been delivered during an IPL match in 2019.
Twitter
Our Special Correspondent   |   Calcutta   |   Published 10.03.22, 12:04 AM

Ravichandran Ashwin can breathe a little easy. The off spinner, who was with Punjab Kings during IPL 2019, had created a furore by ‘Mankading’ Rajasthan Royals’ Jos Buttler and defended himself by saying that he acted “within the rules of the game”.

The Marylebone Cricket Club (MCC), the custodian of cricket laws, on Wednesday eliminated the stigma attached to the word ‘Mankading’, making it clear that the game’s most controversial form of dismissal is legitimate.

As part of reforms, ‘Mankading’ — where a bowler runs out the non-striker if he leaves the crease before the ball is delivered — has been moved out of the section of the Laws dealing with “unfair play”.

A spokesman for the club said: “This clause remains one of the most controversial clauses in the Laws of Cricket, despite MCC having changed the emphasis of this Law, so that responsibility is put on the non-striker to stay in their ground until the ball is released. This latest change goes a little further, removing this Law from ‘unfair play’ and moving it to ‘run out’.”

The change will come into effect from October 1. But it is up to individual governing bodies to adopt the changes into their own playing regulations. For example, the ICC may decide to run the T20 World Cup using the present laws in October-November.

Named after legendary Indian all-rounder Vinoo Mankad, who first used the method against Australia to dismiss Bill Brown in Sydney, 1947, this mode of dismissal has always been officially allowed but has often been a source of controversy, since it is believed to be against the spirit of the game.

“It is a run-out but it has always been in the unfair play law and we questioned, why is it unfair?” Fraser Stewart, MCC Laws Manager, was quoted as saying by The Times, London.

“It is legitimate, it is a run-out and therefore it should live in the run-out section of the laws. Before this change, this was the only way you could be out that wasn’t in the dismissals section.”

“I was always uncomfortable with that particular dismissal being called Mankaded,” Tendulkar said in a video message. “I am really happy that it’s been changed to run out. It always should have been run out.”

Shane Warne, who passed away earlier this month and was team mentor and brand ambassador for Rajasthan Royals, had described Ashwin’s ‘Mankading’ Buttler as a “disgraceful and low act”.

But Ashwin stuck to his stand. “I don’t understand where the spirit of the game comes, naturally if it’s there in the rules it’s there,” the off spinner said.

Other changes to the MCC Laws that will come into effect include the new batter being on strike even if the players crossed while a catch is taken and a permanent ban on using saliva to shine the ball.

The changes will also allow greater leeway to the bowler in the judging of wides when a batter has moved across the crease, and see the introduction of penalty runs for the batting side should a fielder be deemed to have moved unfairly.

Previously, if the two batters crossed before a catch was taken, the new batter would go to the non-striker’s end; now they will always be on strike — unless it is the end of the over — in a move that was proposed as a way of further rewarding the bowler for taking a wicket.

Use of saliva to shine the ball will now be permanently outlawed. MCC’s research found that not using saliva had little or no impact on swing.

Deliveries down the leg side, which are deemed a wide in all limited-overs cricket, may not in future be penalised if the batsman moves their position in the crease. It was felt unfair that a delivery might be called “wide” if it passed where the batter had been standing as the bowler entered their delivery stride.

The rewording of Law 22.1 means that wide calls will “apply to where the batter is standing, where the striker has stood at any point since the bowler began their run-up, and which would also have passed wide of the striker in a normal batting position”.